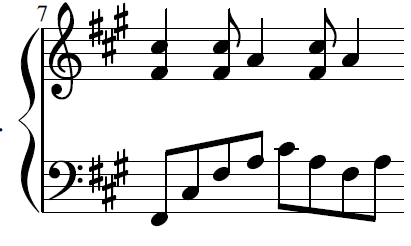 How can I transfer from the F# on the fourth line to the rest?

It really depends on the size of your hands, but for me (with an average-ish hand span), this is the 'best' way of doing it:

If you find that you are struggling to stretch that, you could try switching fingers mid-note (i.e. playing a note with 3 but holding and swapping 3 with 4, so you can reach further). Also, you should try to avoid playing a black note with 1, since the thumb is not ideally positioned for it. Where possible, replace it with 2; it makes for far easier playing. (Sometimes you can't avoid playing a #/b with the thumb, and it often takes a lot of practice to get it right. Avoid it if you can.)

Hopefully this points you in the right direction.

I'd take a page from Chopin for this one.

I agree with 5-3-2-1 but if you are still not comfortable, try pivoting around 3, so that the tip of 3 stays roughly (not exactly) the same place in space, and the hand pivots around it.

Now, let's suppose you are repeating the same set of 8th notes again. In this case, you want to wind up on the thumb on the A, so you can make it easily to the next F#. For the last four 8th notes, I would use 2-3-5-1, or possibly 4 instead of 3 (if you're using Jeff's fingering, then 1-2-3-1 is best). There is a bit of work to keep the 3rd/4th from getting tangled up when you're trying to get the thumb on the same note two notes later, but in the end it will be easer to control than using 2-1-2-1 or something similar.

On the other hand, if the next notes are the same as the last four, or perhaps something higher up in the treble clef, then probably 2-4-5-4 is best to position the hand for those notes.

4
How to finger a piano piece?