Is there such thing as a piano-like keyboard with all whole tones between two adjacent white keys?

Just a quick question, which came to my mind several days ago. I thought that it would be much easier to learn to play a piano (or a keyboard), which has a consistent structure - a black key (halfstep) between each two white keys, thus making it.. i dunno, more chromatic?

Well, obviously the average usual piano is easier to play in the C major, but not in other keys. One needs to learn each scale in all 12 keys, which seems quite overwhelming for me. The same is with chords, while a piano keyboard with consistent blacks and whites wouldn't suffer it. At least from the guitarist perspective it seems much more logical to me.

I think I'm not the first one who mulled on it. If there is such musical instrument, I would like to try it. As a guitarist I prefer to think in steps (I, III, IV, V, etc) and really like the ability to shift my scales and forms. I tried to play the piano and I really like that instrument, but the need to learn everything in 12 keys scares me (:

P.S. It seems that not everyone understands the question, so I have edited the title to clarify it. But to make sure Everybody gets what I mean, I created a little picture, like this:

I've looked into this before, and there really don't seem to be any keyboards like this available apart from the Jankó Keyboard. Whether that's because it's really a bad idea or more due to the current layout being a heavily established convention I couldn't say for sure. Some pros and cons:

Sharps and flats make little sense in the new system, but the current system is pretty strange anyway - E# is just F, another white note, double sharps... In the uniform system sharps and flats can be re-structured logically to always appear on black notes. B is no longer necessary as a designation.

There was a company operating since about 2006, the C-Thru-Music company, which sold a product called the Axis 64 which achieves a similar musical result to what you are looking for using hexagonal keys. It is a Jankó-like system, but in the form of a reasonably affordable MIDI controller.

Unfortunately they announced on January 2015 that they are out of business. 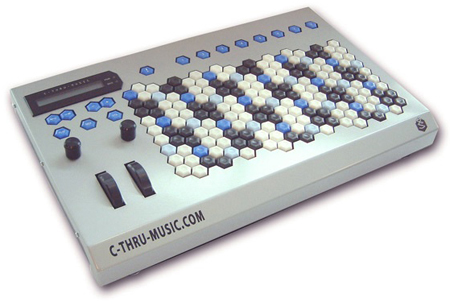 Well, obviously the average usual piano is easier to play in the C major, but not in other keys

On keyboards, digital pianos and even some rare acoustic pianos it is possible to use transpose feature if some other key seems much easier to play. I have learned some chord progressions with transposition first to make easier, but then re-learned to get them also with untransposed keyboard..

Learning this way bounds you to your instrument. You will not be able to play the piece on the majority of acoustic pianos, and even on unknown model of a digital piano you may not find fast enough how to turn transpose on (may be model-dependent).

Trouble is, in the middle area, how would you know which black or which white note was the one you wanted to play? The idea of 2 blacks/space/3 blacks is to see a pattern to help. As in the note(s) in between the 2 blacks are all D.

Your idea may work if there is colour coding as in a harp. If all the Cs, say, were red then it would help navigate round.

Then you'd have to wait, maybe 50 to 100 years, while the idea caught on, and there were plenty of similar instruments for you to play on.But you're right about trying to make it more guitar-like in that the shapes are transferable, so you use the same pattern for each key, just move up or down.

You could program a MIDI device to play pitches this way when triggered from a regular MIDI keyboard. (For instance, to only have semitones on the white keys, and not to use the black keys - this would reduce the range of course.) It would make a nonsense of the repeating pattern of black and white keys though…! These would no longer have the same pattern for each octave. I'd love to try playing a keyboard set up this way.

I once played a "left-handed" piano, where all the low keys were at the right, and high keys were at the left - I reckon your suggestion would be even more confusing - but a wonderfully weird idea!

EDIT: I must stress, there is NO musical advantage to doing this - it would just be interesting… Similar suggestions have been made about having music notated on staves with equally spaced semitones, but this just doesn't make musical sense.

ANOTHER EDIT: the type of keyboard you propose would indeed make learning scales (and so how to play in different keys) similar to how a guitarist sometimes thinks about learning them. But it isn't necessarily any easier. This difference (between learning scales on the guitar and piano, and the relative difficulties of each) often comes up in my guitar lessons, so let me elaborate...

On your keyboard, you would still need to learn the patterns for (say) Major and Minor scales (two of each in fact, one starting on "white", one on "black"). Yes, you could then play all scales with these two patterns, just as a guitarist only needs a couple of patterns (or even one of each) to be able to play each scale type in all keys. Easy huh? Well, no. Because what a guitarist gains in fewer patterns to learn, they lose in reference points - apart from the fret-dots (which some guitars don't have anyway) there is nothing distinct about the positioning or patterns for scales of each different key. This would be even more of an issue on a keyboard of many octaves, which would now have no reference points, instead only a uniform alternation of black and white keys.

To sum up: yes, it is a pain learning all those different patterns for scales on the piano - I know, I'm a good guitarist but a not-so-good pianist. But, it is the fact that they all have individual patterns, which helps to make scales on the piano easily identifiable, and so learnable…

Finally, it is worth pointing out, the kind of keyboard you propose would, ironically, make it harder to play tonal music that uses major and minor scales, as the pattern of tones and semitones on a conventional keyboard reflect the pattern of tones and semitones in a major scale. A keyboard laid out with uniformly alternating black and white keys, would be best suited to playing intensely chromatic music, or music solely in whole-tones (Debussy meets Philip Glass, springs to mind...)

I'd still love to play on the kind of piano you propose, though - but don't reckon it would catch on!

There are lots of grid-style controllers that have identical spacing and keys for all notes laid out chromatically..

The closest contender might be the Linnstrument. There's Ableton Push, Novation Launchpad, and Animoog might be the exactly it except it's an iPad app, but the on-screen keyboard is very customizable.

Regarding Ableton Push: in chromatic mode each row is a 4th above the row below it, so as a guitarist I found playing it in chromatic mode came very quickly (except it doesn't have that major 3rd four rows up).

Yes, indeed, I saw one once, and I played it.

I saw a company demonstrating a MIDI controller keyboard laid out exactly as you are describing at a Summer NAMM (National Association of Music Merchants in the USA) convention several years ago. Unfortunately I don't recall which year's show it was (it may have been about 20 years ago), and I don't recall the name of the company. They had a system where the "black" keys were actually of several different bright colors according to some color-coded scheme for learning to play music which they had devised and which they intended to market along with the hardware.

I listened to the sales pitch, and gave it a look, and I said, "You only have about 600 years of tradition to overcome."

Many exhibitors at the NAMM conventions are actually inventors trying to get financial backing for new musical instruments or equipment that are not actually being manufactured yet; they are only demonstrating prototypes. Apparently this company and their keyboard were in that category. I have no idea if their products ever actually shipped or sold in stores; I never heard anything further about them again. I suspect that their business idea and their invention failed.

This idea has been pondered many times. They call it a 'symmetrical keyboard'. A good collection of material is on this website: Le nouveau clavier. Unfortunately there is no manufacturer selling this type of keyboard.

Your keyboard scheme basically is a simplified Jankó keyboard missing a significant number of its chord and transposing possibilities.

You have to be aware though that like with a guitar, the evenly distributed button keyboard is quite easier to master when playing by ear than by playing from a score as scores reflect the black/white key arrangement rather closely.

Not the answer you're looking for? Browse other questions tagged piano keyboard midi-controller-keyboard or ask your own question.

-2
Has anyone built a piano based on the chromatic scale?

34
Using keyboard/MIDI controller to learn piano
12
Do weighted keys on a keyboard lead to more expressive playing?
1
Minimal MIDI digital piano
7
How to get started recording music with Reaper?
3
How to use a 61-keys digital piano?
21
What are the practical advantages of keyboards with non-weighted keys vs. weighted hammer action?
3
Black keys issues on keyboard
0
What is this variety of keyboard called?
3
How to explain black and white keys on a piano keyboard