Normally, we're told that 5/4 is usually 3/4 + 2/4 or 2/4 + 3/4. (At the very least, it's unusual to have a meter that large without "secondary stress" beats.) However, how do we make sense of the metrical pattern when the two rhythms are pitted against one another? 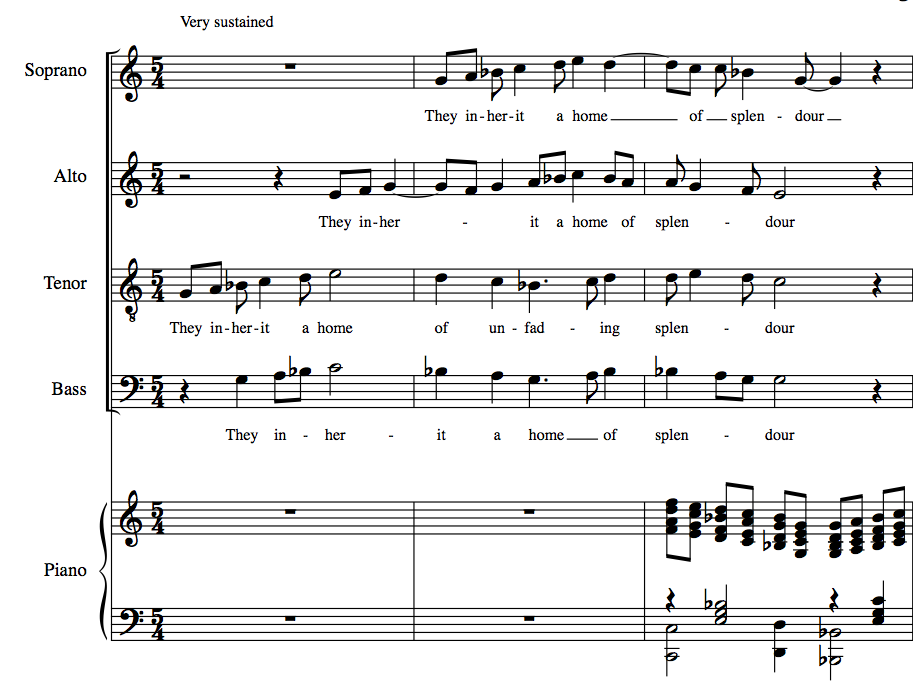 The first bar is clearly 3/4 + 2/4—or would be if the tempo weren't so slow (it's about quarter note = 56). The second bar, however, puts the stress on the third beat in the men's voices but on the fourth beat in the women's voices. And in the third bar, the voices suggest a 2/4 + 3/4, but the accompaniment seems to be in a 3/4 + 2/4 pattern. Plus, the aforementioned slow pulse seems to wash away any real sense of an overall rhythmic organization.

So how do we analyze such a pattern to make sense of it?

Well, I have to ask "told by who?" It is not the case that 5/4 has to be interpreted as either 3/4 + 2/4 or 2/4 + 3/4. It is perfectly valid to use groups of 5 crotchet beats as the overall rhythmic template of a piece of music, without having to have the same sub-groupings in different parts.

In fact, you suggest an answer in your question; the rhythmic complexity of the contrapuntal texture (particularly at this slow tempo), washes "away any real sense of an overall rhythmic organisation." Therefore, we do not need to interpret the music as having any accented groupings within the 5/4 time signature. However, I suspect the 5/4 time signature is still useful; it looks likely from your excerpt, that the piano part may more strongly emphasise 5/4.

If you are planning to conduct this piece, though, it does make sense to find the best grouping for each bar (either 2+3 or 3+2, as you have already done with the first few bars). But, in this kind of music, it is not always likely to follow the natural rhythmic stresses or rhythmic groupings in all of the parts.

I'm wondering if the 5 was considered a 'common denominator' by the composer, or such like. Often, when just reading particular words to a song, emphases and a natural rhythm will be apparent.Reading the phrase out loud gives various different rhythms, and the composer has taken some of these to make certain words more stressed. However, he's also put the phrase in other voices so that the stresses are 'unnatural'.The first bar, for example, could have been written for the bass voice as 4/4 starting with 'They'.That could put the tenor also in 4/4 starting on an anacrucis.

It could have been written is a Stravinsky sort of way, in whatever time sig. but using the '<' sign over emphasised notes.Or - it could have been written with the sig. changing in each bar, but that would complicate other voices' writing. We need a count of some sort, and the composer elected for 5 to incorporate all the parts. But as it's very slow (apparently), it could even be counted in 1s, especially as each part has what appears to be its own rhythm. Readers would not want it written that way, though.Time signatures are a Man-made phenomenon, which obviously usually reflect the intrinsic rhythm of what is written, either naturally or what the composer has decided. The two may not align, as I feel in this case.

The term 'pattern' is used in the question. A pattern is something that repeats uniformly.This doesn't seem to.

Not the answer you're looking for? Browse other questions tagged rhythm time-signatures analysis or ask your own question.