Why does the 5th string of a 5 string banjo usually start from the 5th fret?

Why does the 5th string of a 5 string banjo usually start from the 5th fret? From the perspective of a beginning guitar player, it looks rather cumbersome both to play and manufacture. Wouldn't this make some chords impossible, that would be possible if the 5th string began at the peghead?

The Wikipedia article on banjos explains it thus:

The modern 5-string banjo is a variation on Sweeney's original design. The fifth string is usually the same gauge as the first, but starts from the fifth fret, three quarters the length of the other strings. (The long-necked Vega Pete Seeger model starts the fifth string from the eighth fret.) This lets the string be tuned to a higher open pitch than possible for the full-length strings.

I've seen the opposite done on orchestral double basses. There "most professional orchestral players use four-string double basses with a C extension. This is an extra section of fingerboard mounted on the head of the bass which extends the fingerboard under the lowest string and gives an additional four semitones of downward range" (quoting Wikipedia) 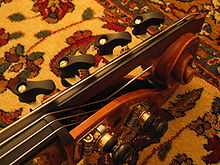 If the fifth string were to be extended up to the peghead, it would be an exact duplicate of the first string (both D notes) since they tend to be the same gauges.

But to answer: Having that string truncated at the 5th fret makes it a G note. In traditional Scruggs Style banjo, it is primarily a high-root drone string. Since most tunes on banjo are native to G, having a drone on the root is the best sounding configuration. If we capo up two frets to A, there is usually a corresponding spike or other method to also capo that truncated string down below. Then the drone would be in A for a song in the key of A.

Melodic style playing uses it primarily as a scale note. This method gives you more freedom on the first string to go around the root note since you can always grab the root itself up on the 5th string.

Regarding your side comments about some chords being impossible: It depends on how much of a purist you are. I'll try to articulate this, and I must assume some banjo familiarity... In standard tuning, the 1st and 4th strings are tuned to D, an octave apart. The 3rd and 5th string is tuned to G, an octave apart, and the 2nd string is a B. So when fretting a D major chord with the standard "D-shape", you have the 1st and 4th strings as the F#, the 2nd string as the root (D), and the 3rd string as an A. The 5th is unchanging, for reasons explained above. Now if you were to grab the 7th tone of that chord, you would have to rearrange and grab it above on the 2nd string (reach up to the C), which means that you are jettisoning the root note. I don't believe a chord is a chord without it's own root, textbook-wise. We have to make these sacrifices a lot given our duplicate strings and restricted instrument range. So to a purist, yes, some chords are impossible, but to a banjo player they are all very possible and effective: Since we are usually playing in context of a guitar and/or bass, we have plenty of external support playing the root for us.

Not the answer you're looking for? Browse other questions tagged banjo or ask your own question.

3
Banjo 5th string as a melody note
2
How to chose chords on Plectrum Banjo
2
Why is this fret buzzing on my plectrum banjo?