For example, this guitar have 2 soundhole: 1 in front, 1 in side: 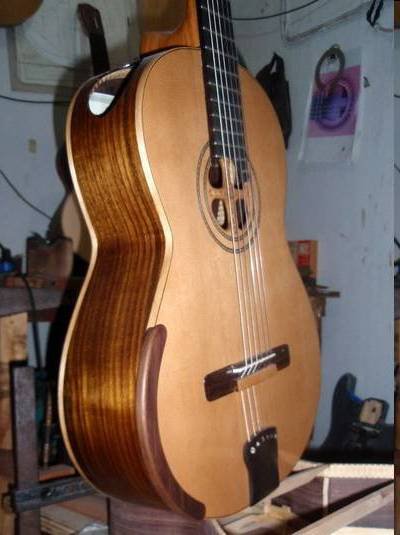 Then, this guitar have only have 1 soundhole, in side: 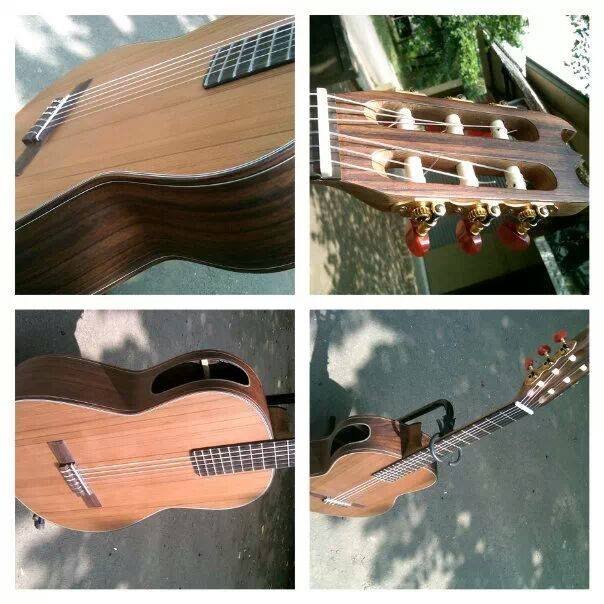 Or even I've seen guitar with 2 soundhole in the sides of the neck (on top).

Let's just say they have the same wood specification. Do the tone or even the volume affect? Is it (the tone and vol) will sounds different than the normal soundhole (which it's 1 in front)?

acoustic-guitar lutherie
Share
Improve this question
asked May 30 '14 at 4:09

The majority of sound from an acoustic guitar is produced by the sound board (or 'top').

The soundhole allows the sound waves generated at the inside face of the soundboard to escape the body.

With all else being equal, a guitar with only a sound hole in the side will be quieter from the front but probably louder to the player.

Any difference in tone will be much harder to predict and will depend on the guitars dimensions, material properties and exact sound hole placement.. With all the uncontrolled variables involved (timbers inhomogeneities are impossible to predict) I doubt an accurate simulation could ever be run.

The situation is similar to a speaker cabinet with a separate hole in the baffle. Speakers move air by moving backwards and forwards. There is a 'push' of air as the cone moves forwards, and also a 'push backwards' as it moves back. The air in a normal enclosed cab goes nowhere, but in a ported cab has a chance to 'push' through the port (separate hole). This adds to the volume and changes the tone of the sounds the speaker produces.

On a guitar, the vibrations of the strings move through the bridge (and any other points of contact) as well as through the air to the nearest next point of vibration - the body. This then vibrates and amplifies the sound. Like the speaker analogy, the air needs to escape to be heard better.This is a non-scientific approach to the answer, but a scientific one would consider the paths of sound waves, their direction through the guitar, and where on its body would be the optimum place/s to let the sound out. With various parameters - type of wood, contour of shape, size, etc. Given that all these are equal,which is almost an impossibility in itself, it's still extremely difficult to define the best place for hole/s.But their positions will certainly affect the sound quality and volume. Not always for the better !

Yes, virtually any change will affect guitar tone. But the idea that sound comes from the sound hole is a myth. Holes do not produce sound.

A guitar is like a speaker. The sound board is like the cone. The sound hole is like the port. The size of the sound hole has a great effect on the tone because it directly affects the air resonance of the guitar. The bigger the hole, the higher the guitar's natural frequency. The location of the hole has little or no effect. http://liutaiomottola.com/research/ports.htm

I have played a few guitars with an additional side mounted sound hole. Although not scientific in the least, I found that a small to medium elliptical opening (about three inches long and about two inches wide) located on the apex of the upper bout or between the apex of the upper bout and the waist sounded best. Unfortunately, this placement often interferes with a model's pre-existing electronics package as with Breedlove, a moderately priced model that has this feature. As noted above, sometimes a different location makes the sound worse than no hole at all. Finding a selection of guitars in the same store that have this feature in the same place is "rare". A well placed side sound hole can make the experience for the player much more enjoyable.

Not the answer you're looking for? Browse other questions tagged acoustic-guitar lutherie or ask your own question.

7
12-string acoustic guitar - how do nut and saddle materials affect tone?
1
Carving a cutaway in a right-handed bass guitar to better suit a left-handed player
4
Acoustic guitar, chip in rosette wood, how to avoid in future?
8
How does bracing work?
11
Does the type of wood on a solid body electric guitar affect its tone or sound?
4
Does leaving the excess string uncut, affect the guitar's tone?
1
Does an acoustic guitar pickup still benefit from overtones provided by wood types?
1
Is it safe to use velcro Command strips on the inside of the body of an acoustic guitar?
2
Crack between fretboard and guitar neck