How to interpret a MIDI file?

From a midi, I extracted this set of notes. Each row is a set of notes played together. The order is not temporal order, as I write each set only once.

I want to simplify the music (I will play it with a PSG) to max three notes at a time. How should I simplify the 4 notes sets?

The complete MIDI can be downloaded here.

guitar piano electric-guitar midi
share|improve this question
edited May 30 '14 at 23:24

Right, this is the first time I've done this - I'm going to post another answer! My other answer deals with the process of working from frequency lists and more general comments (and I didn't realise that your chord list wasn't temporal - by the way, musicians would never, ever, ever think like this - it's like trying to work out what a painting looks like by being given a list of the colours in it!). This answer deals with the specific chords in your MIDI file...

Now that I've looked through the MIDI file, it's pretty clear that most of the track is two guitars playing the same thing (in unison). You only get four note chords where they play different notes. The first time this happens you want to retain the bass notes and very top notes, so you want to lose the note just above the bass notes. Therefore, F2 C3 D#5 G5 becomes F2 D#5 G5 and D#2 C3 D#5 G5 becomes D#2 D#5 G5 (this happens a few times): 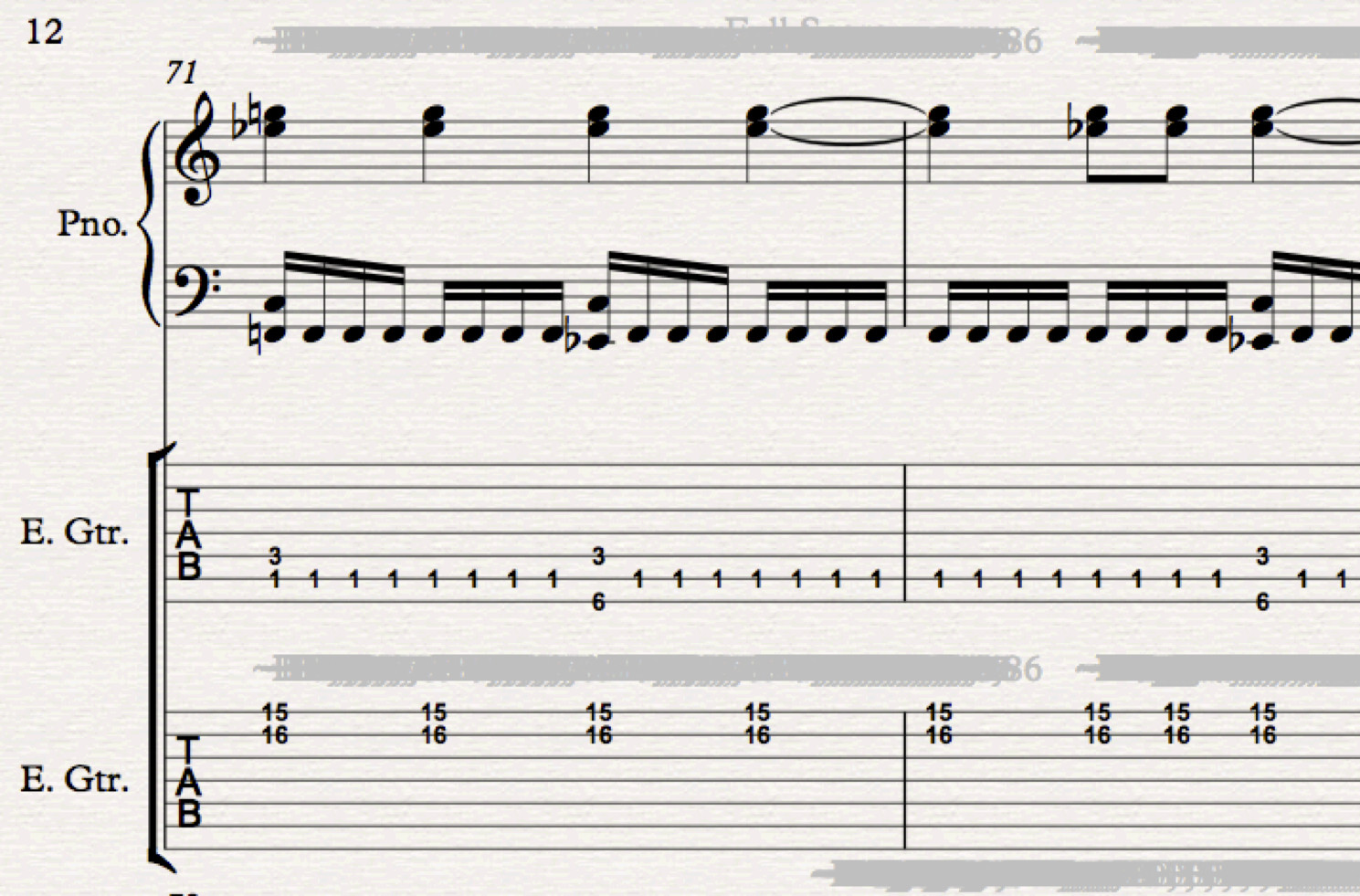 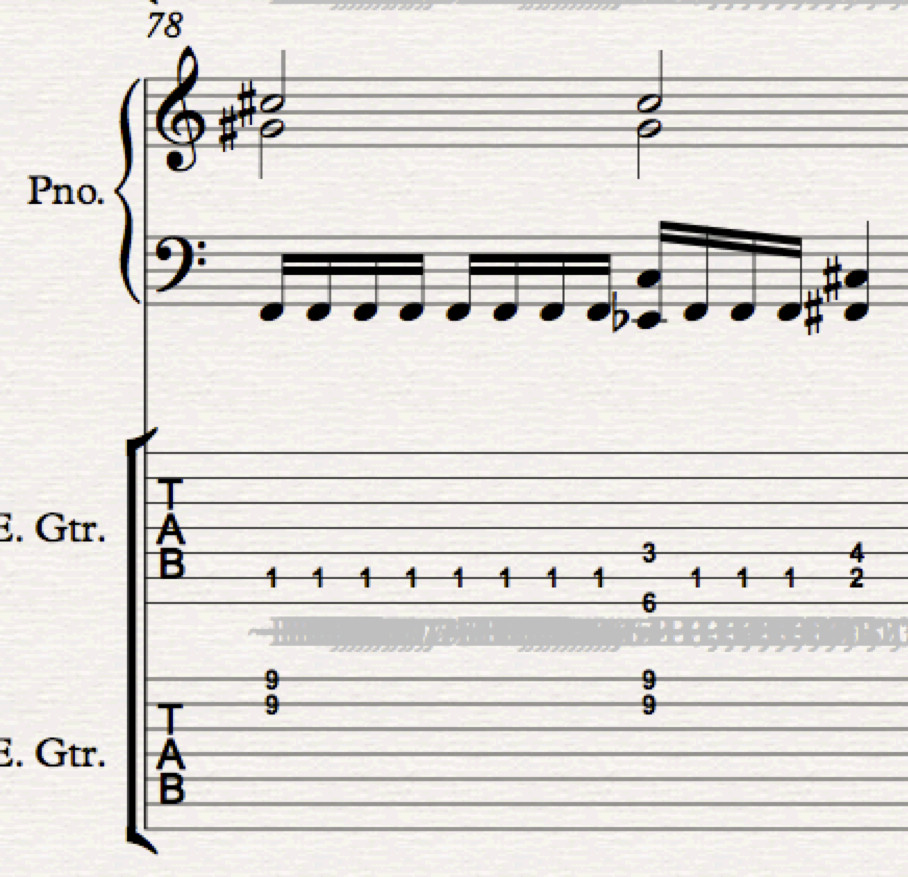 I think that's all of them! Great song, BTW…

Well, this certainly hasn't been the most conventional way to analyse music, but it has been a great "puzzle" to solve, and a really different way of doing things. I'll put some excerpts of the actual music in this answer later, so everyone else knows what we're talking about!

HAVING GOT A LOT MORE INFO FROM THE OP, MY OTHER ANSWER (BELOW) DEALS WITH THE SPECIFICS OF THIS SONG. I'VE LEFT THIS ANSWER HERE TOO, AS IT DEALS WITH THE PROCESS (FOR ANYONE WHO DIDN'T SEE THIS QUESTION BEFORE, IT WAS ORIGINALLY JUST A LIST OF FREQUENCIES AS FLOATING POINT NUMBERS…!)

Your question is a little unclear, but let me see if I can suggest some ways forward for you.

Firstly, reading what I presume is a series of chords (notes played together), as lines of multiple frequencies is pretty tricky. I would suggest that you need to turn these into pitch names first, whatever you want to do with them before playing them with a PSG.

Converting your list of frequencies into pitch names or MIDI numbers.

It's relatively easy to find out which pitches (and so which MIDI notes) these frequencies correspond to. There are many tables online with this information. Here is one, which also has a frequency to note converter. Even using this it would still take quite a bit of time to convert all your pitches one at a time. Ideally, you would use some kind of software solution, which could take your list of frequencies as input and give you pitch names or MIDI notes out.

I haven't done this for you - my life is too short! But, converting your first set of four pitches gives: Eb C Ab Db. This is an Ab major chord with an added 4th. This is quite an individual sounding chord. If you wanted to simplify this, by missing out one of the notes, to make a three note chord, you will certainly lose some of the character of this chord. However, I suppose you could lose the bottom note and retain the "major-chord-add-4th" character. I'm not going to go through all your frequencies and convert them to then analyse what would be the best way to simplify them. If you do want to take advantage of the expert advice on music.SE, in order to get suggestions for how you can simplify each of your four note chords down to three note chords, you will get far more responses if you give the pitch names of these frequencies.

Once you have decided which pitches to miss, I'm not sure whether you would want to play them using frequencies or MIDI numbers; presumably either would work, depending upon the format required by your PSG (sorry, I'm no expert on this…)

EDIT: Okay, having had another look at this, you have only actually got 5 four-note chords, and I think one of these is probably wrong (77.7817 138.591 77.7817 155.563), as it has the same pitch twice - maybe this is supposed to be on two lines(?) As it happens, your other 4 four note chords all have an interesting property, they fall into a pair and two single chords, where in each case the bottom note has been present in a large number of chords leading up to them:

This being the case, you can omit the lowest pitch of these four note chords - the fact that it is present in the preceding chords means that the ear "fills in" this note for you. They are known as pedal notes, and in this case they have been strongly established and so probably don't need to be repeated in the four note chords.

This has required quite a bit of deduction - it would be far easier with conventional notation to look at!

Not the answer you're looking for? Browse other questions tagged guitar piano electric-guitar midi or ask your own question.

1
Advice on writing a midi file from almost complete sheet music
2
Looking for a trance gate midi device for Ableton Live/Max for Live
2
What are good ways to pick MIDI instruments that go together?
2
Last note in midi file playing at half the length
3
Multiple Midi Controllers on the Same Channel (different octaves)
3
How to merge multiple MIDI files into one?
2
How to simplify a midi file similar to the same limitations of a player piano
3
Is there any standard format for MIDI drum lines?
5
assistance adding back midi to a lilypond file