What is a latin rhythm and how do I play it on Double Bass?

I have to practice this song: 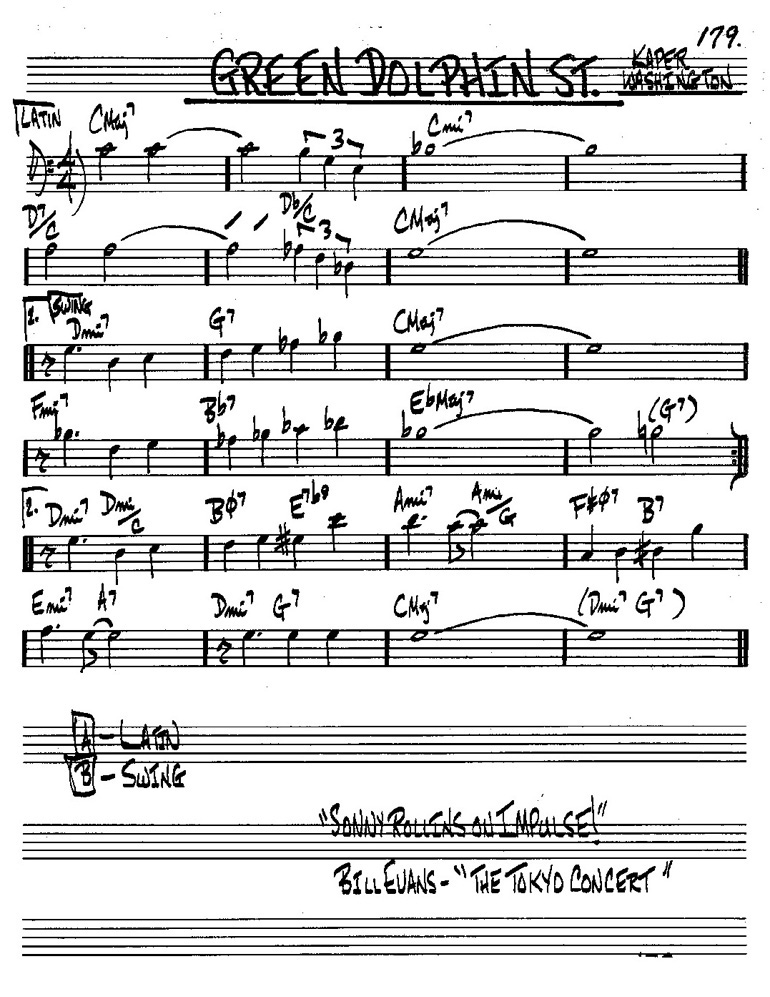 Where the A part is supposed to be played Latin and B Swing. How do I play the Latin part on double bass?

Used like this "Latin" is a rather non-specific term. Markings denoting specific styles of Latin American Music, for instance Bossa-Nova, Samba, Mambo, Rumba, Salsa etc. would suggest particular associated rhythmic patterns, particularly for bass and drums. However, this generic use of the word "Latin" leaves a lot of room for interpretation by the performer; in fact, you could argue that it can lead to a generic, somewhat sanitised Latin feel (one band I used to work in called this "Gameshow-Latin"!). This post (and its answers) discuss the differences between specific and generic Latin rhythms. But, of course, experienced players will bring all of their knowledge "to-the-table" when seeing a simple "Latin" marking, drawing upon their vocabulary of Latin styles (and knowledge of a wide range of Jazz "standards") to use patterns and rhythms best suiting the chart on the stand.

You can easily replicate a generic Latin feel on bass by using techniques such as alternating root and fifth, on beats 1 and 3 respectively, and adding in some dotted and eighth notes for syncopation along the way.

However, I don't think that is what you want here. Looking at the part, you see that the first section just has a pedal C note in the bass part (all the chords are on C or over C). So, you could get away with just playing long Cs, or maybe octave Cs. After all, the bass line will "take-off" if you start walking in the Swing section - you want to create a bit of tension on the pedal note, before the swing, by not doing too much…

In fact, this is what the bass player does in this Miles Davis version, it's pretty effective:

(BTW, the version I link to starts in Eb - I've transposed to the same key as your chart… And, it's a rough transcription, giving you the main ideas, it's not "note-for-note"!)

As a percussionist having played folkloric Afro-Cuban music, popular "Latin" music, jazz, Brazilian batucada & bossa nova, etc. for over 20 years now, I can say that Bob Broadley's answer is is really pretty clear and accurate.

Calling something a "Latin" beat is really vague. Someone who actually performs any type of "Latin" music wouldn't even use the term very often except to describe it to someone who doesn't know the music that well.

My suggestion would be to start by listening to/ watching some heavy hitters play a standard like this, and you'll quickly see that there are countless ways to interpret the composition.

If you want to learn more, there are some good instructional books/DVDs that focus on Salsa or other genres. This one was very good: http://www.amazon.com/Salsa-Rhythm-Latin-Performance-Series/dp/0941677354 but there are others that are specific to bass. This book is also supposed to be incredible: http://www.amazon.com/Salsa-Guidebook-For-Piano-Ensemble/dp/0961470194

Here are a few videos of Green Dolphin, just as examples:

Shift the accents from the strong beats to the weaker beats in the measures marked Latin, as per syncopation. A Brazilian percussionist reminds me that in Samba, the joke is, "Where's the one?"

Might help? [Disclaimer: I am not a qualified Jazz bassist, nor Latin Bassist.]

Not the answer you're looking for? Browse other questions tagged jazz double-bass latin-jazz or ask your own question.

5
How do I balance the double bass against my body?
12
How can people stand on their double basses?
5
What does a double bass string eliminator do?
11
Did they ever make a double bass this huge?
4
Angled endpin on double bass?
19
What is double about the double bass?
2
How to transpose music written for bass to flute?
1
How do I play this double bass part? (16th note + 3 grace notes)
2
Identify this Latin rhythm
8
How to accompany with piano in latin music when given only chords?