Why do I see different tabs for same C Major scale and which one should I use?

I was reading 10 minute guitar workout and I'm doing some exercises to understand how to create a Cmaj6 chord for example, from a C major chord.

When I was reading online for tabs to understand which notes were the 4th, the 6th note etc from the C major octave I stumbled upon two websites with two different tabs for the first octave, although the notes are the same which makes both of them correct I assume:

The second scale sounds better to me for the D note, since I prefer it played on the E string 5th chord than open on the D string.

Could you tell me why I see different tabs? Is there a source you recommend for me to use a reference for this kind of exercise where I can see the notes a major scale is composed of?

Thank you in advance.

The second one is the "c-major scale at the third fret" -- note that all notes are fretted. This scale pattern can be moved up or down the neck to play different major scales.

As Dave states, the first is an open Cmaj scale, using as many open strings as possible. The second is actually on a bass, so there is no direct comparison.They are not in the same octave. However, if you pretended that those 4 strings were the bottom 4 on your guitar, then you could use the same positions as shown, and actually play the scale an octave higher than on bass. It will sound the same as the first one, but with all notes 'closed'. This can be moved up and down to produce many other major scales of one octave. Move the pattern up two frets, and you're in Dmaj. Up two more and it's Emaj. Do try to start playing the notes with your middle finger, and use the 'one finger per fret' trick. Your whole hand will encompass all the notes without moving up or down.

There are numerous different patterns for each scale, it's the way the guitar is configured. It is a mixed blessing, in that it can simplify changing to a different key, but seems complex because there are several patterns to learn which all give you the same end product - a scale. In other words, there are multiple places to play the exact same note. Only two for that low C (5th string 3rd fret and low E 8th fret).But get up to higher notes, like top E - top string open, 2nd string 5th fret, 3rd string 9th fret, 4th string 14th fret, 5th string 19th fret 6th string 24th fret - and that's without looking at another 5 harmonics !!So scales can be played wherever the set of notes can be found. Tricky.

Whenever you see scales notated in both standard music notation and tab, and the tab uses open strings, its almost always because it was entered on keyboard and then the notation software auto-generates the tab.

What you want is diagrams that show the pattern from the lowest note of the scale that is available in the hand position, to the highest note that is available in the hand position. You will start phrases on different notes in the scale at different times, so limiting your practice by just going root to root is not very useful. Plus you will reuse the major scale patterns eventually for 7 different scale sounds, which won't share that root.

Avoid auto-scale generators as they generate some really dumb patterns sometimes, go with ones made by humans who play guitar. This chart on my website is what you want: 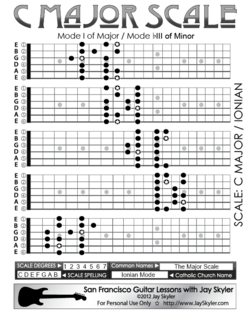 Not the answer you're looking for? Browse other questions tagged guitar chords scales or ask your own question.

1
On guitar, which Major scale patterns should I learn solely?
0
making different Guitar tabs for one song
3
Why did Segovia use a different pattern for the B minor scale?
1
How exactly am I to practice guitar scales?
4
How can I know which major and minor chords go in a scale?
0
Scale Chords are different. Why?
4
E major and A minor together are not in scale?
2
if chords are not only linked to the major scale, then why scales at all?