Fingerpicks - which styles are they used for?

I'm currently learning how to use fingerpicks, like these: 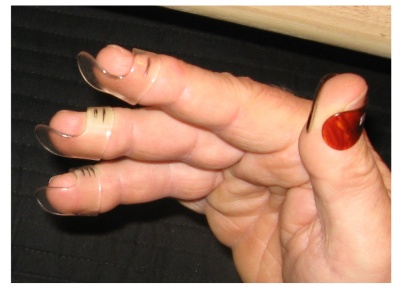 The exercises I found are all blues or bluegrass related. I really like the strong sound and speed potencial, but I am more into the mainstream music, not blues.

So I have a question: are fingerpicks used for any other style besides blues and why are they used at all?

Finger picks are used as a preference. Players such as Chet Atkins had a very famous style of picking, where he mainly used a thumb pick I believe (check out Stairway to Heaven by Hayseed Dixie, Mr Sandman by Chet Atkins) Players like Jeff Beck use their fingers mainly, which he has developed a neat playig style. Then about everyone else uses a pick, because it's probably the easiest. So it all depends on your preferences / what you're playing. You could also use your pick and fingers at the same time, and that is done by holding the pick between your thumb and index finger and then using the other three to pluck the strings.

The benefit of using a pick is a louder attack, which is really important when you're purely unamplified and near other, often louder instruments, and where the attack of the note is crucial. Dobro and banjo players are really top ones here, and I understand it's big for pedal steel players.

Classical and flamenco players pick with fingernails, but nylon strings are easier on fingernails than steel strings. I've heard fingerstyle players talk about superglueing slivers of ping pong balls to their fingernails to have something replaceable and more able to withstand the strings, yet more stable on the finger than fingerpicks.

There are players who just use a thumbpick. Nils Lofgren plays rock with a thumbpick and fingers. With electrical playing, especially rock playing, it seems like the benefits of fingerpicks are not more easily handled by amplification. For hybrid playing, picks are allowed but not necessary.

Fingerpicks are used instead of fingernails. I don't think many (or any) classical guitarists use them, but some steelstring guitar players do(blues/bluegrass). Fingerpicks are basically used to get that nail type sound without destroying your nails. As you see on many classical guitarists they have very long nails, sometimes fakenails, which allow them to get a differnet sound. Fingerpicks could be used to get somewhat the same sound...(a bit too general)

As you are more into mainstream music I would suggest putting down the fingerpicks and use your fingers or a pick instead.

With the caveat that I seem to be kind of an outlier, I'll weigh in: I learned to play guitar starting on a cheap Stella 12-string and copying Lead Belly from old records, so I got accustomed early to using a single index-finger pick and a thumb pick. I did occasionally use a pick on the middle finger, but on things like Mississippi John Hurt songs it seemed better just to ditch picks altogether for 3- or 4-finger picking. But at age 68, after using thumb-and-index picks for 53 years, I use them on EVERYTHING sometimes (still prefer bare fingers, but sometimes you have to poke out of loud mixes)---12-string; 6-string; electric (yes, Strat---not super-lightly strung, though---I use .011-.049); bass (yep); banjo; everything. It does get some interested strange looks from people when I play in public. So from my POV, I'd answer you by saying fingerpicks CAN be used in any style. Whether you like the result is a matter of personal taste! (I'll invite you, if you like, to check out any of my videos on YouTube---I've got something like 420---that involve this 2-pick method, which is most of them. On none do I use a third pick, and never just thumb pick with bare fingers. I'm "Alonzo Garbanzo" there. If you do, you can judge for yourself how effective it is!) Hope this is at least a tiny bit helpful.

Not the answer you're looking for? Browse other questions tagged guitar styles picking or ask your own question.

29
“one finger per fret” - is it worth following this rule?
5
Bach's Bourree BWV 996 timing issue
4
How are method books for instruments created and why do they work?
8
How to make the most of practicing guitar
2
Can fingerpicks be used with long nails?
7
Guitar Bluegrass basics
3
How to learn to play the guitar while I have musical education?
4
How do you stop your hands from tensing when performing solo acoustic guitar?