What is the origin of the up bow and down bow symbols for bowed string instruments?

My brother is a beginning cellist and I was helping him annotate "up bow" and "down bow". I find it particularly strange that the "up bow" symbol is similar to a V. Intuitively, I would have thought it would be ^ or an up arrow.

I thought I would find the answer to this for a quick Google search, but haven't yet turned up any information. Is there any known historical reason for the use of these two symbols?

Last year I was told by a Baroque and Renaissance expert cellist/gambist that the ∏ and ⋁ signs originate from abbreviations of the latin nobilis and vilis. This blog post also says something along those lines.

Apparently, french composers liked to write n above important notes, demanding that they be played in a particularly beautiful, noble fashion. To the players, this was generally a prompt to play those notes from the frog for best control. v was the opposite, indicating that these notes didn't need to be payed to much attention to, which was then generally used as an opportunity to bring back the bow. The composers probably didn't really care about that, only about the tone, hence didn't directly write p and t which would have literally expressed pull or push. But instead of elaborating on these tonal qualities, I suspect many teachers just taught the simple rule “n means down-, v upstroke”, so the original meaning got lost and the n symbol became a symbol most today wouldn't recognise as such.

This is one of the best questions I've seen for ages. I've looked for a while, but can't find a definitive answer, but hopefully I can give some useful information.

Two things: the up bow mark doesn't really describe an upward direction, but instead that the bow is pushed, rather than pulled as in a down bow. So, this helps to explain why this doesn't use an upward pointing arrow. The orchestration book on my desk, Walter Piston's Orchestration, points out that these signs are,

more clearly expressed by the French tire (drawn) for down-bow, and pousse (pushed) for up-bow.

I figured that trying to find out when bowing marks were first used might yield the reasoning behind the symbols used. This webpage has some detailed information about the early uses of bow markings in string music. Interestingly, it mentions that the violinist Ferdinand Franzl used bowing marks, but that they were,

inverted versions of the modern signs

At the bottom of the webpage there is a link to another webpage describing the continuing development of string bowing markings - but unfortunately the webpage linked to no longer exists, oh well!

Just one observation of my own, the upbow on string instruments is more suited to creating a crescendo (getting louder), with the downbow more easily producing the opposite; to my eyes this makes the upbow symbol "look right" (it is similar to an upward crescendo symbol). Equally, the downbow on strings is more effective at creating a strongly accented "heavy" articulation, and the downbow symbol somewhat resembles the marking for marcato.

Sorry, to not be able to give you a definitive answer - I hope this post gives you some useful information though.

As I say, @tohuwawohu deserves credit for this additional information.

UPDATE: the search continues, especially considering @11684's comment above (below the OP's question) - I'm trying my hardest to find a source to back that comment up.

In the meantime, I have found an example which uses t (tirer, to pull) for down-bow and p (pousser, to push) for up-bow, as mentioned above. It can be found in this book. See extract below from Principes de violon (1718) by French violinist and dancing master Pierre Dupont: 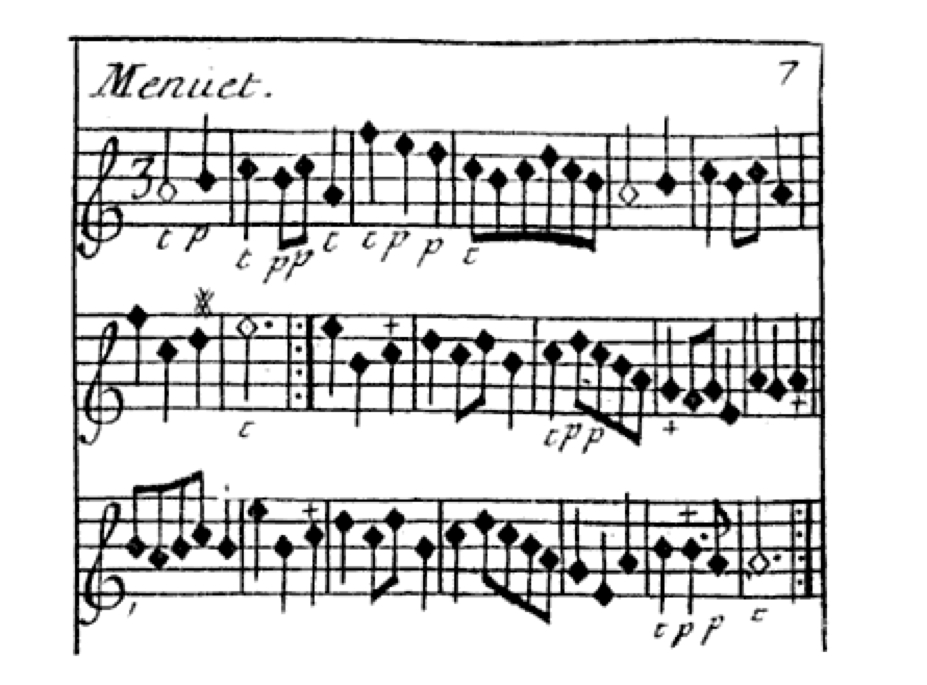 At first sight, i would suppose the symbols are inspired by the different shapes of the bow's frog and tip respectively. But that's a mere guess, without corroboration by sources.

Here's an illustration showing a bow's frog (above - notice the orthogonal shape) and tip (below - showing the characteristic "pointy" shape): 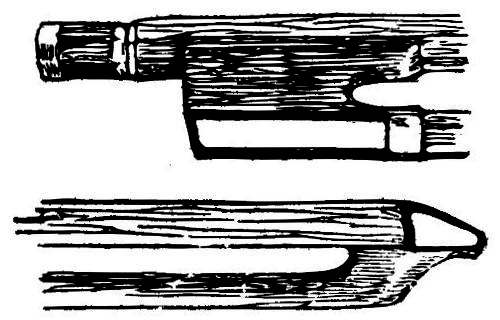 n and v (standing for Latin "nobilis" and "vilis") seem to be first used in print in Georg Muffat's 1698 "Florilegium Secundum", a collection of music for string orchestra with a preface in which Muffat explains the French style of bowing (associated with Lully's orchestra) for the benefit of musicians elsewhere in Europe.

They are definitely used by Muffat as indications for the direction of the bow. The terminology of "good" and "bad" notes respectively for notes on the strong and weak parts of the beat was, however, common in the 17th century, so the two ideas are connected.

An older German encyclopedia (Brockhaus, 4th edition, 1885-1892, see "Bogenführung", attention: not only German but also black letter) gives also the upside-down variants with the inverted meaning for both bow-up and bow-down marks. I found no reference for it, but could imagine, that these were abandoned to ensure orientation-independence. Note, that quite a few ornamentation marks are turned upside down and are written to the other side of the note system depending on the direction of the note stem, like staccato-dots, marcatos, fermata etc, a practice I found also mentioned as possible (even if not recommended) for bow markings in "Behind the Bars". So having not only the direction, but also the form of the sign, might have been quite an advantage before electric note stand lamps.

And obviously any symbol is more international than terms in whatever language.

Old thread I know, but still there seems to be no answer. I have a theory \/ is used for Guitar also to mean strum up.

both for Violin up bow and Guitar up strum the bow or plectrum move from high strings to low strings so \/ points across the stave in the direction you arpeggiate the notes. Admittedly this makes more sense for strumming than bowing.

The use of n (nobilis) and v (vilis) by Muffat seems like a good theory for the shape of down and up bows. Reference “Performing Baroque Music” by Mary Cyr.

I've been teaching strings for years and always tell my students that it's a theory, but seems plausible. My vote goes for the shape of the tip and frog ends of the bow. Whether it was originally t and p is irrelevant since neither resembles the currently used symbols.

6
What is the symbol above this note?

8
Why is (stiffness/speed of sound-travel of the wood) important for a bow?
22
Origin of the 'squigly line' used for quarter note rest?
14
Chord symbols for diminished and half-diminished
5
What exactly is it that is so magical about rosin for a bow?
13
Where did the symbols ♭ and ♯ originate from, and why those?
14
What is the origin of the triangle symbol for maj7 chords?
2
What is the recommended notation for bowed marimba?
1
What symbols indicate the major chord, besides the root note alone and "maj"/"major"?
6
Hollow, x-shaped noteheads