How widespread was the use of Aguado's “Tripodium”, and are similar devices still used today?

Dionisio Aguado (1784-1849) developed his "Tripodium" (also referred to online as a "Tripodion" or simply tripod) to aid support, positioning and clear sound projection while playing classical guitar (see picture below).

How widespread was the use of this device?

Are similar devices still used much now? This link shows a modern maker of this device, but I'm pretty sure I've seen guitarists using other kinds of guitar-supports, for instance when playing more than one guitar live. 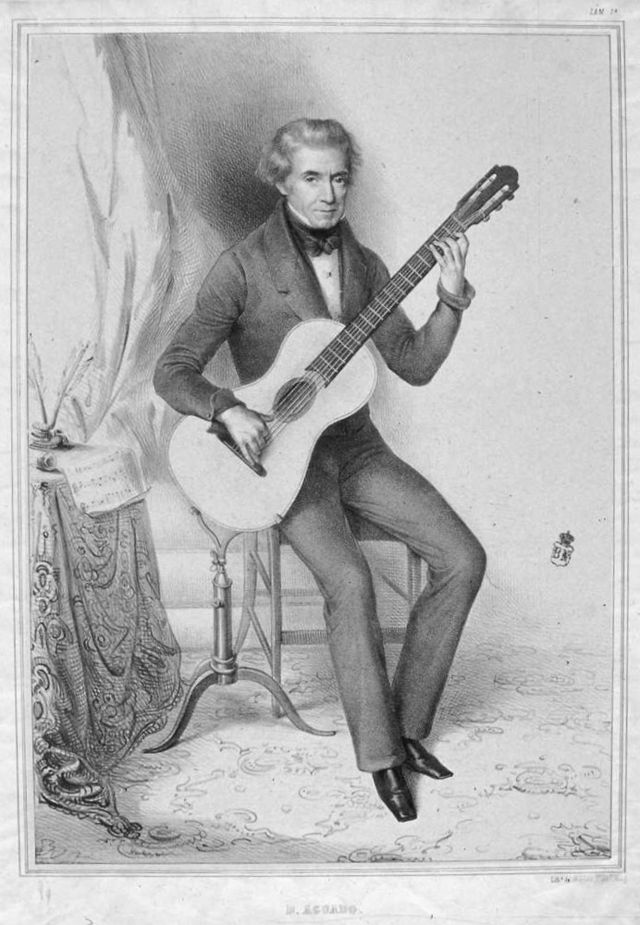 Tripodium are not commonly used by classical guitarists at this time. Most performers stick with a simple foot stool. What you have to remember is that in Aguado's (and indeed Carcassi's) time it was equally likely that you would be playing with bare fingers, than your finger nails. In fact, even in the 20th century using your nails was somewhat controversial: http://books.google.com/books?id=ocwwb7WImqoC&pg=PA51&lpg=PA51&dq=classical+guitar+nails+controversy&source=bl&ots=MOtjleoAQ_&sig=6IPUeEJtj52YRtYRmVz-z8UI-BA&hl=en&sa=X&ei=Q6-oU7GEMqrlsASD3IHYAw&ved=0CCIQ6AEwAQ#v=onepage&q=classical%20guitar%20nails%20controversy&f=false

As nearly all classical guitarists today use their fingernails, the extra projection from the special stand is often not needed. I needn't mention the modern convenience of microphones. Also, notice how much smaller the guitars of those times were. Certainly not the booming concert hall instruments we have today, but something more closely associated with intimate performances.

However, I'm sure some modern revivalists would love to use a Tripodium. If you are interested, you should build one yourself - it will be sure to turn heads, especially at a baroque music society.

Oh, and last of all, yes, guitarists do use a special stand to play multiple guitars:

To my knowledge they have always been called gracie stands. They don't have anything to do with projection, or at least in the intended rock concert setting there is little point in that facet of their construction. Rather, they just make it easier to stand up and play or two guitars.

Not the answer you're looking for? Browse other questions tagged guitar technique classical-guitar posture or ask your own question.

6
Are there exercises similar to the 'Buddha rope' for endurance on bass guitar?
6
What are the advantages and disadvantages of various methods of supporting the classical guitar?
8
What are the dos and don'ts of positioning your thumb on a guitar?
3
How to use chords notations in the tab?
4
Looking for genres or songs similar to the acoustic guitar part at the end of Black Sabbath's Heaven and Hell
12
What are the trade offs between using a pick and fingerstyle for guitar?
19
Was Bach the first to use thumbs on a keyboard?
3
Being deaf and still produce music, how is that possible
14
How was the D chord constructed?
3
Are short finger nails on the strumming hand not uncommon in flamenco and classical guitar?