What is this Chord Notation using Roman Numerals with super and sub script? [duplicate]

I know how to read Roman numerals for chord progressions, but I've seen something recently I don't understand. I've attached an image below. What are those super-/subscripts? 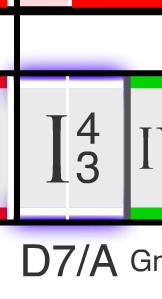 This is a tonic (chord I) seventh chord in second inversion. It could also be written I7c; the use of numbers is called figuring (or figured-bass). (However, it is odd to see D7/A written below it, as this implies a dominant seventh chord, rather than a seventh chord on chord I.) The "I" refers to which degree of the scale the chord is built on; in this case it is the tonic, or the first degree of the scale.

The bass note of this chord is an A (hence being in second inversion). The 4 refers to the interval of a fourth above this bass note, a D (the root of the chord); the 3 refers to the interval of a third above this bass note, a C (the seventh of the chord, in this case a b7 - unless this is indeed a major 7, C#). The other interval needed to produce a second inversion seventh chord is the third F#, in this case a sixth above the bass note - this is implicit in this kind of notation.

The top line shows the full figuring (i.e. all the intervals required above the bass note). The bottom line shows what is actually used in practice, leaving out figures which are implicit.

D7/A says play a D dominant 7th chord, with an A bass.That should be sufficient. The other part gives the same information in a different way.The chord will contain D, F# A and C, with A underpinning the rest of the notes.

Not the answer you're looking for? Browse other questions tagged chords notation chord-inversions roman-numerals or ask your own question.