Vivaldi's “The Four Seasons”, Who Chose the Title?

Did Vivaldi himself choose the title "The Four Seasons" and the titles for each of the four concerti, or they're chosen by publishers?

Le quattro stagioni is the original title of this work, which translates to 'The four seasons'. This title was indeed chosen by Vivaldi himself, who deliberately composed the pieces to reflect the mood of each season.

The wikipedia article sums the titles up pretty nicely!

Vivaldi's Four Seasons is one of the best and earliest examples in music history of what is called programmatic music or tone poems. The instrumental music was written by Vivaldi to tell a specific story which has accompanying words that are written down, not sung.

More importantly, within the sheet music itself, at specific places, Vivaldi wrote in phrases and sentences from the poems that describe the scenes and characters that the music is supposed to evoke, in order to give direction to the musicians.

You can see a facsimile of some pages from a published score in Google Books at this link. Scroll through the pages and you can see Vivaldi's text descriptions attached to the music, in Italian and partial English translation.

Here is a screen shot from the beginning of the Spring sonata. 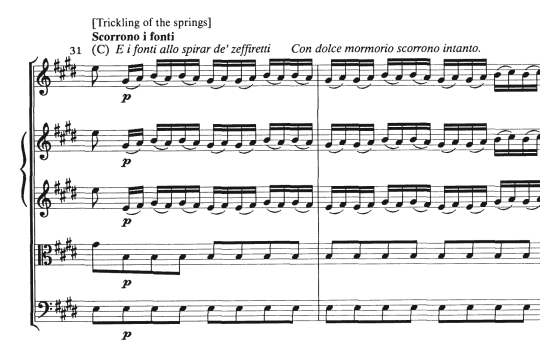 The Italian text reads: "The birds celebrate her [Spring's] return with festive song, and murmuring streams are softly caressed by the breezes."

Here is a web page that gives the texts of the four sonnets in the original Italian and in English translation.

(It is generally believed that Vivaldi wrote these poems, although it is possible that his original publishing company commissioned someone else to write them; regardless, they have always been regarded as a proper part of the sheet music itself.)

Not the answer you're looking for? Browse other questions tagged history classical-music or ask your own question.

8
Did Rostropovich ever play his Humoresque himself?
3
Original underlying melodies of Liszt's Hungarian Rhapsodies
4
Find the origin of folk
4
When did voice parts start using treble clef?
7
What led to the historical predominance of the four-part harmony in Western Music?
3
Why is Vivaldi's Seasons not the start of the Romantic Era?
2
What's so important about Venice in the Baroque period?
2
What does the word “Grand” in a title of a piece of music (by e.g. Beethoven or Chopin) mean?
2
Why is the numbering scheme of the Telemann-Werke-Verzeichnis (TWV) not adopted more universally?
11
How was sheet music printed before the advent of computers?