For consumers shopping for specific name-brand guitars, such as Gibson, how may one identify counterfeit knock-offs?

Can we collectively develop a check-list of tip-offs confirmed by experienced users.

Furthermore, any characterization of how pervasive this problem is would also be welcome.

If it is necessary to compartmentalize the feedback by maker/model, my primary interest concerns the electric-spanish (ES) and similar models.

A good general rule is that you should make sure that you are buying an instrument from a reputable dealer and not some seller on eBay or similar whom you know nothing about.

If you are buying what is advertised as a new Gibson instrument, is the seller a store authorized by the Gibson guitar company? This would make it much more likely that the merchandise is genuine. If a reputable business authorized by Gibson began to sell fakes, we would hope that Gibson would find out and rescind their authorization. You can find lists of authorized dealers on the Gibson website. There are circumstances when stores that are not authorized Gibson dealers might still have new Gibsons for sale (this is sometimes called "grey-market"); this is not necessarily a bad thing, but again, you have to be secure about the store's reputation.

The other rule is "if it sounds too good to be true, it probably is not true." If this is a used or new instrument that you know should sell for a certain price, and the price the seller is asking is quite low, then it's probably a fake. Either that, or the instrument is flawed or damaged and you should inspect it very carefully in person before buying it, or make sure that the dealer promises to refund your purchase price if you are not satisfied with what you receive.

I suppose the most perilous area is purchasing a vintage guitar with high value to a collector. This is where many fakes appear.

To compound the issue, Gibson, Fender and other companies are always making new guitars that are deliberate "re-issues" or replicas of certain historical models. Here is a link to the Gibson Custom Shop Historic Collection. For example (and there are many examples), in 1995, Gibson sold "1958 model" ES-335 guitars which were brand-new but designed to look exactly like the originals made in 1958.

Today you might find an unscrupulous seller who has an ES-335 "1958 model" made in 1990, but he advertises that this particular guitar was actually made in 1958 and he wants a huge amount of money for it.

In that case you would have to know what specific details would distinguish a "1958" model built in 1990, and to look for signs that the unscrupulous seller had tried to subtly modify the guitar to remove the signs of 1990 manufacture to make it look like a real one made in 1958. You might also insist that the seller provide a signed appraisal of the guitar from a known expert at a reputable vintage guitar store, and you might want to check with the vintage guitar store to confirm that the appraisal document is one that they actually wrote.

To make things even more confusing, in the last 15 years or so there has been a huge interest in "relic-ed" instruments, which are brand-new instruments built by companies like Gibson or Fender whereby the manufacturer artificially ages the instrument to make it appear to be old, or heavily-played and poorly-cared-for! They will wear away the guitar's finish in a controlled fashion, and treat the metal parts with a corrosive agent to make them look tarnished with age. They might also deliberately damage the guitar by knocking small dings of wood out of it or burning it with cigarettes. Gibson and Fender charge a lot of extra money for this treatment.

One example that has particularly fascinated me is this: early Gibson electric guitars with one-piece mahogany necks are famous for the area where the neck meets the headstock being very fragile and subject to snapping in two if the guitar was dropped. Many authentic vintage Gibsons from the 1950s, 60s, and 70s, therefore, have had the neck/headstock snap in half and have been glued back together and re-finished to repair the instrument. Obviously some of these have been professionally repaired and some have been poorly and sloppily repaired.

Well, in recent years the Gibson Custom Shop has sold a few brand-new, very expensive completely hand-made "artist model" guitars that have had the neck/headstock area deliberately broken while it is still in the factory, then glued back together and refinished. 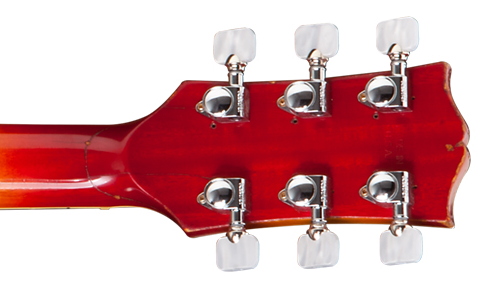 (Above is a picture from the Gibson website of the expensive limited-edition new-model Ace Frehley 1976 relic-ed Les Paul. Look closely and you can see that the headstock has been snapped off and re-glued. You can also see extra drilled screw-holes near the tuners; on the original 1976 model, there were a certain brand of tuners installed that required certain screw-holes. At some later time on the original guitar, a different brand of tuners were installed that required new screw-holes to be drilled in different locations, leaving the original screw-holes visible. So for this brand-new guitar in 2012, Gibson added the extra screw-holes to replicate what had been done to Ace Frehley's actual guitar.)

Fender has even started a line of affordable, new mass-produced "relic-ed" guitars called the "Road-Worn" line, which, although brand-new, are designed to look like an instrument from the 50s or 60s which has been played for decades and shows the wear.

Other manufacturers are beginning to offer "relic-ed" instruments in mass production, although to date Gibson has not done this. If you want a new "relic-ed" Gibson, it will be a very expensive custom-order option from the Gibson Custom Shop.

Well, I'm not good enough in answering this kind of question, but I'll do my best.

Perhaps you can look the series code number. By going to it's website, you can check if it's an original or not. Or you can try the guitar (or any instrument you want to buy with that brand) and compare to the same model/brand in another shop, if the feeling you got from playing those instrument (though, your mood will affect, but ignore it) is the same, I think it's original.

But, the main indicators that we can identify (if we bring some tools like tuners), do the note on each fret (if guitar) is correct? Sometimes counterfeit guitars' fret are misplace some millimeters. Also, check it's body construction. If it's painted, check the paint color, is it rough, or is it smooth. If is electric, check the pickups, switch, and knobs. And check if the neck bend a bit or not.

Unless, you can ask the shopkeeper. This is the best option.

Counterfeit goods (so probably guitars also) frequently do not reproduce the original packing (box, user manual, etc), often using much cheaper alternatives. You may try to check how the original packing looks like in some more expensive shop where guitars are new and most likely original.

Also, the serial number is most often just missing, so you even do not need Internet to check if it is valid.

Asking the sales person directly is not reliable as the seller may be instructed not to leak this highly negative information. Of course, it is good if you can show the guitar to some independent expert.

23
Is my Yamaha guitar counterfeit?
1
What is the expected orientation for Gibson guitar headstock stampings?