How to play chords on guitar from piano?

I have learnt lot of chords on digital piano and know mostly how to make any type from any note using some algorithms; but I would like to know if there is way to transfer them onto the guitar or there exists a general algorithm to play them on guitar; I don't know how to play guitar much, only some scales.

Let me explain the some of the algorithm: Suppose we want to form chords out of D-Maj Scale or E-Min. The notes are:

For Major you would do(sorry I didn't sharpen C and G in E scale):

I don't have a better answer than the first two, but based on your edit I can elaborate a bit on your options. It's possible we are still misunderstanding exactly what you are asking. The algorithm you described still works on guitar, but only once you have memorized where every note on the neck is. On piano its easier because a "C" always looks like a "C" and there is only one place to play it per octave. On guitar there are a lot of "C"s and some of them are the same note (same octave).

Since guitar has many locations for every note, without experience it's hard to build chords just from knowing the notes you need (because of the tuning and only having four fingers). So it helps to learn the shapes as a starting point, then you can just flat the 3rd for a minor, add a 7, etc.

So the algorithm I and many guitar players use is to learn the basic shapes (starting with open chords and barre shapes) to see the most economical way to form common chords. Once you learn those you can modify them to your needs. As I and others have said, a good place to start with this is the CAGED system, as it shows you the 5 basic open chords, then how to play them in any position (barre) for major, minor, 7th, etc.

But if you want to build the chords yourself as you did on piano, and you don't want to use the shapes, you already have everything you need. The algorithm you described still works on guitar, as I said you just need to know where every note is. You seem to know what notes make up a chord-- after that all you have to do is find all the places you can play those notes within a span of about four frets or so. You can usually omit the 5th if you need to, and just focus on 1, 3 and 7 (if you need it) for the most part. And on guitar you don't always need to use close voicings (for example 1,3,5 in that order). Sometimes you have play them out of order, for example 1,5,1,3,5,1 (in the case of E open/barre shape). This complicates things and is another good reason to start with shapes.

Another way you can do it is by learning intervals, but this is a more complicated process because chords don't always go in order (1,3,5,7, etc). If you find the root, then you can go up a major third for the 3rd, then up a minor third from there for the 5th. A major third is always one string up and one fret back, a minor third is one string up and two frets back, so intervals are usually easy to find (until you involve the B string which shifts things by one semitone). This works with the simplest of chords, but isn't always helpful because you can't always play the notes in order.

Keyboard knowledge will help you, but forming chords on guitar is a different process. On piano you can focus on the scale degrees that make up a chord (1,3,5), but on guitar learning shapes is a much simpler place to start.

The voicings possible for piano chords are not always easy to play on guitar. Sometimes they may not be possible at all. There is a simple reason for this. Piano chords are easy to play when the notes are close together, and become somewhat harder as the notes are further apart. Guitar chords, on the other hand, become harder to play, as the notes become closer together. It is easy to see why this is the case: notes with adjacent pitches are on adjacent keys on the piano; notes on adjacent strings which are also on the same fret are (mostly) a fourth apart on guitar, as the strings are (mostly) tuned in fourths. The example below shows this in practice. The chord shown is very easy to play on the piano; although possible, it is difficult to play on the guitar, as you have to really stretch (remember, guitar sounds an octave lower than written…): 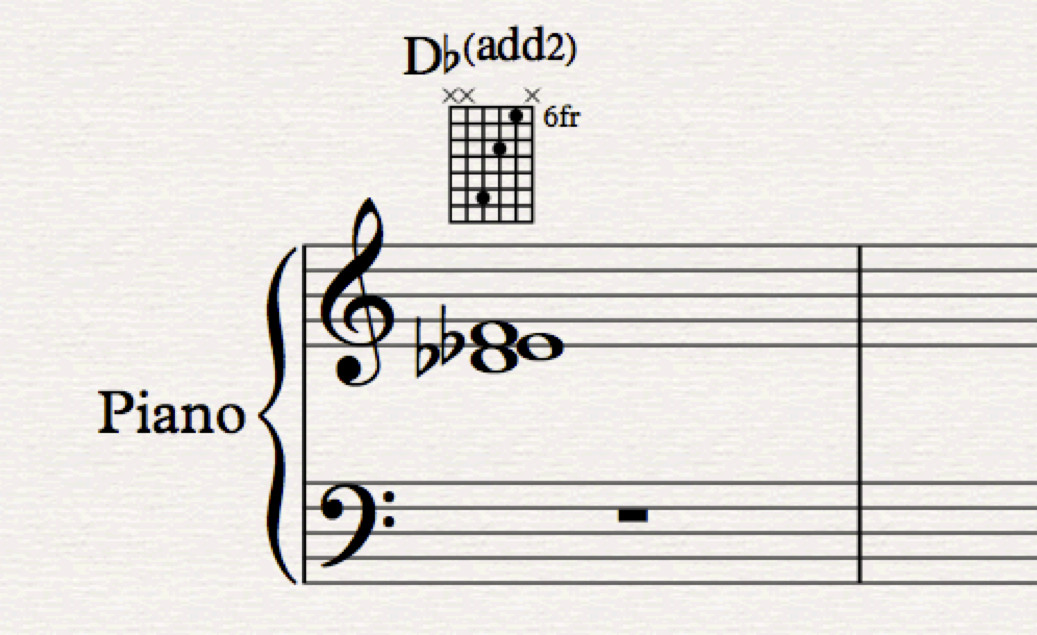 However, there is some "middle-ground". Arguably the easiest chords to play on piano, major and minor triads in close position, are also easy to play on the guitar. The example below shows a C Major and C Minor triad written for both piano and guitar. On guitar this chord shape can be transposed to the required key by simply shifting the chord shape up and down the neck; from this point of view it is actually easier to do than on piano (where different combinations of black and white keys must be learned for triads in different keys).

However, beyond this simple example, chord voicings tend to be different on piano than on guitar, for the reasons given above. Let's take an extended chord as an example. The example below shows a dominant 13th chord written: as it is constructed in theory, by stacking thirds; as a close voicing that would be really easy on piano (it misses out the 11th…); as a voicing that would work well on guitar (this misses out the 5th and 11th…): 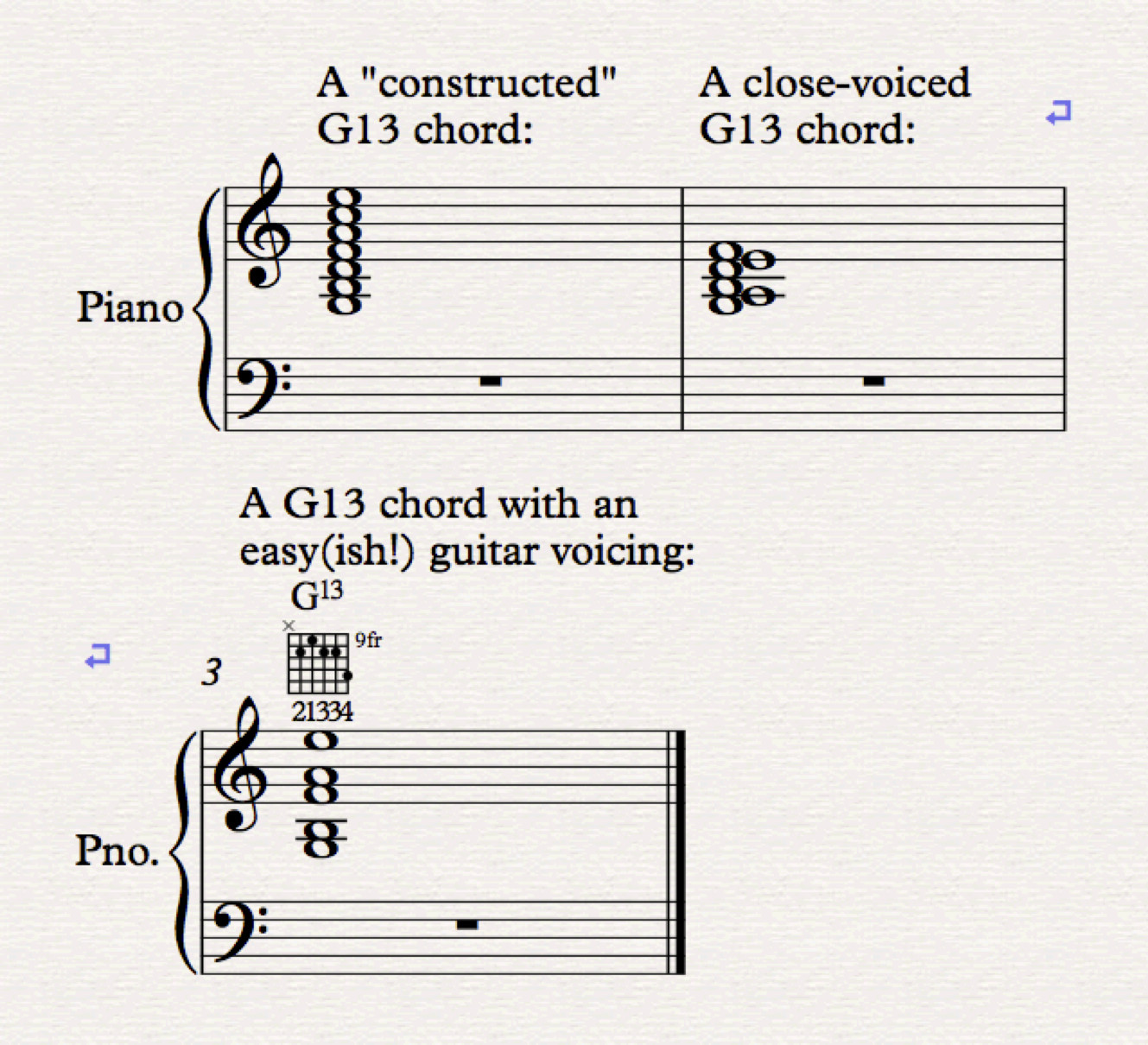 You can, of course, combine knowledge of notes on the fretboard, with knowledge of the notes required to produce required chords, to create your own shapes for guitar chords. However, the approach to doing this is different on guitar, to on piano. Whereas on piano you may tend to play the required notes closer together, on guitar you will tend to play the required notes in a voicing that allows them to be evenly spaced, approximately a fourth apart (so, mainly using 3rds, 4ths and 5ths). Below is an example that, I'm sure, many guitar teachers have shown to their pupils, to illustrate that complexity of chord is not necessarily related to complexity of guitar chord shape (or difficulty of execution): 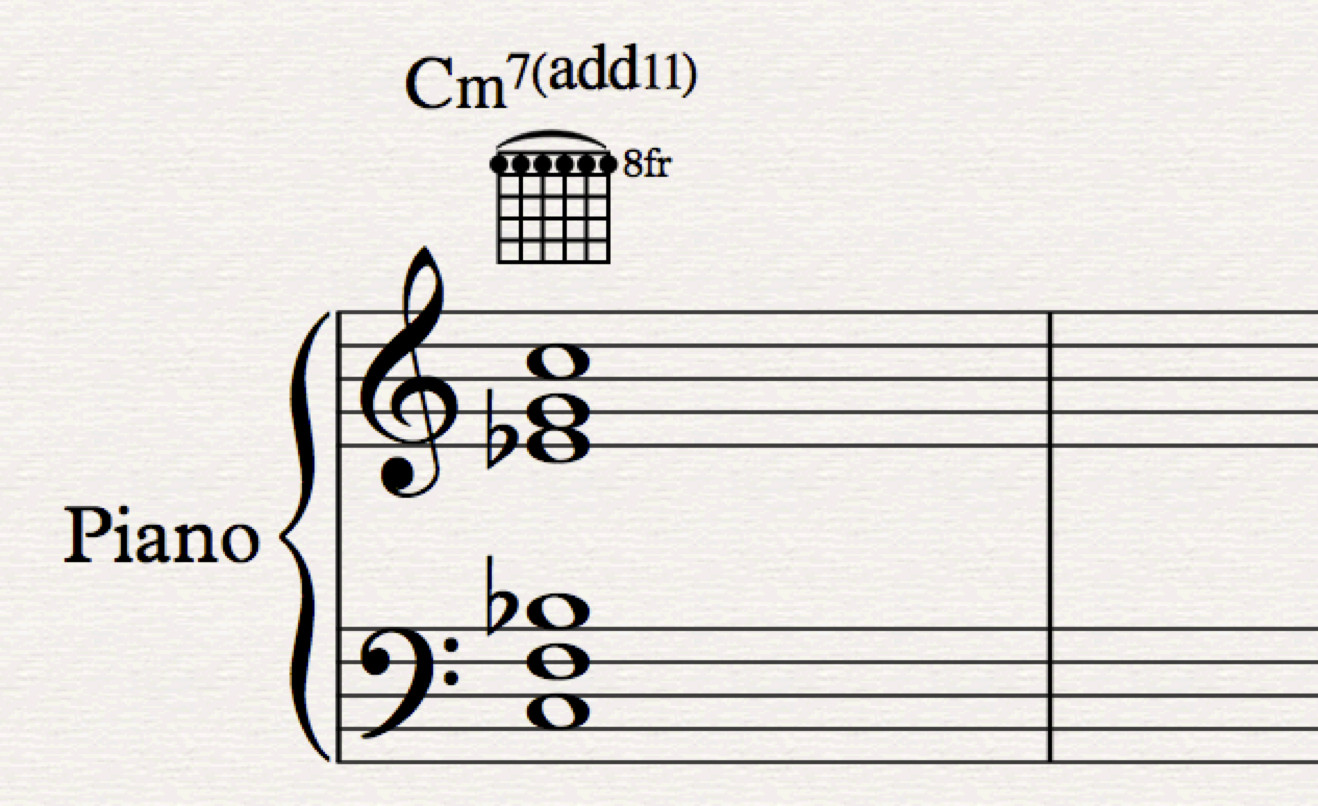 (It's a pretty unsophisticated guitar chord to use, but hopefully it makes my point!)

Finally, it should be noted, that this approach isn't necessarily how guitarists learn chords. While it may make sense to learn piano chords by adding in the required notes, guitarists are far more likely to think in terms of learning shapes for chords. This is understandable; a pianist can see all the notes laid out side-by-side, "ready" to be selected for whichever chord (or set of pitches, if you like) is required. Because of the tuning in (mostly) fourths, a guitarist cannot do this as easily.

In reality, I would imagine that most pianists start with triads and add extensions, as they learn chords; they then think about changing the octave of required pitches to give more sophisticated voicings. In contrast guitarists are likely to learn a variety of shapes using some open strings, for basic major and minor chords (for example, C A G E D and Am Dm Em), before then moving onto: more complex chord types, but still using some open strings (eg. C7 B7 A7 G7 E7 D7 Asus4 Dsus4 Esus4 etc.); movable shapes for major and minor chords (these have no open strings and are often, but not always, barre chords); movable shapes for more complex chord types.

Finally, after already learning a wide variety of chord shapes, a guitarist would be likely to use his knowledge of the required notes in a chord to "make-up" his own chord voicings. There is no reason why a guitarist can't always create chord shapes from a purely theoretical starting point, by thinking within scales and arpeggios (as I'm guessing your question hints at), to find the necessary notes. But, from experience, this doesn't seem to be the way most guitarists start learning chords.

To start with, we guitarists learn shapes.

Sometimes, but actually in general there is no simple way to adjust piano chords to the guitar. Since the guitar is tuned in fourths, only certain types of chords are practical for the guitar. For instance, close chords, in which chords are played in their exact conceptual order such as CEGB (Cmaj7), as well as inversions of close chords, in which one or more of those notes are moved up an octave such as EGBC (Cmaj7/1st inversion) are typically not well-suited for the guitar. Even simple triads such as Cmaj (CEG) are often played in ways best suited for the tuning of the guitar.

If you want to learn how to play primarily major and minor triads on the guitar, I would suggest you learn the open chords C, A, G, E, D as well as their minor variants: Cm, Am, Gm, Em, Dm. Then, you can use something called the "CAGED" system which may be the simple method of moving chords around that you're looking for.

If you want to learn to play more complex four-part chords, you should start with learning the drop2 guitar chord structure. But this is a more advanced topic. A "drop" chord is an adjustment of the chord structure above to make it fit more easily on the guitar neck. For instance, a "drop 2" chord is like the close chord 1357, but the "5" is dropped an octave resulting in 5137. Now the "7" can move to the string the "5" used to live on, resulting in an easy and flexible way to play many complex chords on the guitar.

17
How to memorize seventh chords and inversions on piano?
3
Lead Guitar : How much chords should I learn?
11
Is there any theory to decide a set of plausible chords per measure where a whole melody of a song is given?
2
Remembering the Chords
1
How to memorise suspended & inverted chords?
6
How to Mark the Fretboard without damaging the guitar?
4
How to add lead guitar part to basic vocal/rhythm guitar song?
4
How do I find suitable chords for a melody or a song? Or How do I come up with chord progression?
2
Beginner Confusion Over Guitar Scales
4
Chord pattern formula for constructing chords in a given major or minor key