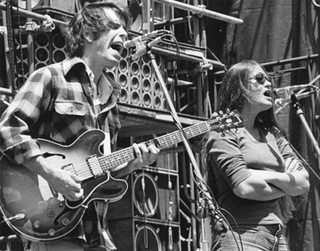 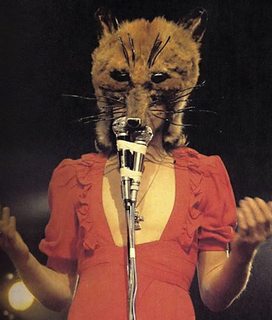 It seems like it was somewhat "standard practice" at one time; why did the engineers set up the microphones in this manner back in the day?

This microphone technique is referred to as "Point Source" miking. The idea is to wire the microphones out of phase with each other to cancel the signal that is being picked up by both microphones to hopefully limit feedback and background noise. Then when the performer would sing into only one microphone, the signal would not be effectively cancelled and could be mixed and amplified. This idea was considered theoretically brilliant and was published in numerous audio magazines and picked up by just about anyone who was building a sound system back then. The Grateful Dead system was probably the most talked about at the time. At the time that this practice was attempted, stage set-up often utilized high power Marshall stacks and monitors were in rudimentary stages of development. Soon enough instruments were miked and mixed into the out front and monitor systems eliminating the requirement for the brute power of the large amps, the behind the band speaker stacks,(terrible idea) was replaced by floor monitors and side fill, and later, in ear monitors mixed specifically for the performers taste and requirements. Also, it seems that in order to really be effective in point source technique, the microphones should be carefully matched up in their frequency response, something that was largely ignored in the world of rock and roll. After all the rock and roll stage has never really been a precise lab setting to fine tune such ideas. The basic laws of physics came into play and the latest magical notion was abandoned and replaced by other ideas.

If you look closely at the photos you refer to and you know how sound systems are wired there is only one correct answer to this question.think about how many cables exit these pairs of mics if you can find a photo with more than one cable on any pair I will be very surprised how do you send one output to two different destinations ? Y them witch will totally defeat the Y which is converting the two mics to one cable in the first place it’s true this was done before the days of isolated splits but has nothing to do with recording or foh and monitors the two mics are wired out of phase there for canceling feedback or any other unwanted signal pay close attention you will see only one of the two mics is being sung or spoken into they are set up for noise cancelation.

0
What type of mic for use with vocals from an electric guitar amp?
1
High-end headset/lavalier mics vs handheld for vocals
2
USB microphones for multi-instrument recording
4
For recording vocal and piano, how to position microphones of the "pocket studio" recorder?
4
How to mic and amplify an accordion for live performance?
2
Are microphones meant for Karaoke and PA bad for recording vocals and instrument music?
1
How many microphones does it take to record an electronic drum kit?
1
Microphone suggestion for piano tuning using mobile app
9
What is the difference between high impedance and low impedance microphones?