In the C major blues scale, there's no F note.

The I-IV-V progression is C-F-G

Without resorting to the C minor blues scale, how do I improvise over a I-IV-V progression using the C Major blues when the F is not in the scale?

"Without resorting to the C minor blues scale, how do I improvise over a I-IV-V progression using the C Major blues when the F is not in the scale?"

The major blues scale is most commonly found in country and bluegrass music. If you are interested in learning to use it effectively then these are the genres you need to listen to and learn licks from.

If you are not interested in bringing aspects of these genres into your own playing then don't waste your time. Learning scales for the sake of it and not learning licks from their common uses in real music is a waste of time. For some reason of all musicians, guitarists fall into this trap most often. Probably more often than all other musicians combined! The world is littered with guitarists who learnt scales but never learnt how to use them musically (eg by learning from those who do use them musically)..But I digress..

Here's an example of it's use over a few chords in A:

(Timing is up to you)

I doubt many of those who use it even bother to distinguish it from the major pentatonic scale. Country and bluegrass are so full of chromatic passing tones, it's already a given that any notes can be added in passing so there's often no need to confuse matters by introducing new scale names.

In most cases the C minor blues scale is exactly what you want. The ins and outs of this differ depending on the exact style you are trying to convey.

Try both of these and see how they suit you. The exact answer depends a great deal on exactly the style of music you are playing.

In general, if you are playing blues or rock (and it sounds like you are) you should focus more on vocabulary and phrasing

Vocabulary: This means having a repertoire of the appropriate material to play over the chords. For blues, the best thing to do would be to learn the solos of other blues players. You can do this from a book, or by ear. You will find that in many situations the players will not exactly play the scale that is theoretically correct. Bends, and little chromatic ornaments are a big parts of blues playing. Many players will even play with notes that sound quite wrong for the sake of tension.

Phrasing: This is how you play. If you play the correct scale, but stiffly, it will still sound wrong. Again, listen to the masters of the style you are trying to emulate. The small inflections, slurs, taps, whatever they put on the note will make the difference between lively music and a technical exercise.

No F in the C blues scale?? You are onto something there! I actually find the simplest way for any beginner to play in key over a (for example C blues) I - IV - V progression is to use a moveable version of a 6 note scale... here it is for the C (I chord): C, D, Eb, G, A, Bb - No F!! No 4th degree. I humbly dub this the "Six Degrees of Separation" scale. Looks like this: 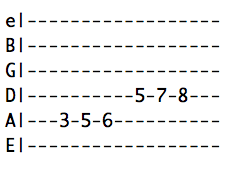 Six notes, that's it. We guitar players bend a lot. I don't bother to include the Maj 3rd (E), cause there's a good chance you're gonna bend that Eb (6th fret A string) up a half-step anyway. Eventually... gonna happen sometime!

Keep going and it's…

Removing the 4th scale degree allows the scale to follow the harmonic progression more faithfully. At least to my ears. Six notes only, for beginners. (Is it Dorian mode leaving out the 4? Raise the 3rd to a Maj 3rd and it becomes pentatonic major with the b7 added. Whatever makes the most sense for you.)

So what is this scale, really? My mind most logically conceives of it is a combination of the relative min/Maj -7th and M7th chord arpeggios. That's how I track it when I improvise. If you play a C-7 arpeggio, and then connect the relative Maj EbM7 arpeggio, you hit these notes, and only these notes. And that's without even bending the -3rd up to Maj. Let's not get crazy. Hah!

If you are new to theory it might be easier to frame it in your head as a A-7/CMaj7 arpeggio combination.

Once you get the hang of it, raise the 3rd to the Maj third when you need to - makes it perfect to play over the dominant 7th chord, which you must, to really play tasty blues.

Also w/the raised Maj3rd it's perfect to play tasty improvisations over Lynyrd Skynryd's Sweet Home Alabama. (FYI, home sounds as D, but root of Six Degree Sep scale for Sweet Home is G) Just take the above six note scale, switch the 3rd to a Maj third and move all C notes to G. Then use your ear, and D will feel like the root. Kind of a modal way to play it. I wanted to include a pic of that, but my rating is newbie, won't let me.

There is a post somewhere on here where a player talks about a minor vs a major blues scale. The major blues scale is the same as my 6 Deg Sep scale with the Maj 3rd. The minor blues scale he talks about is R, -3, 4, b5, 5, b7, R. This is a TOUGH sounding scale, no doubt. b5 rocks. But what I like about my Six Degrees of Separation scale is that if you switch chords, you can solo over ascending or descending chord progressions, moving the root on the 6 degrees scale, and it actually sounds like you're following the changes, not playing some misplaced pentatonic BS.

During the F (IV) portion, you could use either the F-major blues scale or the C-minor blues scale depending on the piece or style or your personal inclination, then go back to C-major blues for the C (I) section.

A lot of times in blues, the scale changes for the different sections. But this can vary with different styles and different compositions.

It seems to me a lot of the folks answering don't realize that there is a "major mode" possible with the blues scale. For example A minor blues is A, C, D, D#, E, G, A, but the major mode for these same notes starts and ends on C. A lot of times (depending on the song) it sounds vastly better than the minor blues scale on the I chord of a set of blues changes.

The C major blues scale has a "C" and an "A" which of course are two of the three notes for the F major chord. The Eb/D# also matches the 7th if you are using an F7. Focus on those notes and treat the remaining notes of the scale as non-chord tones: for tension, passing tones, etc.

The same 'problem' will arise with the V chord, G7. The chord will contain a B natural, but the scale will not. But, the scale will provide chord tones D and G.

Scales are just a starting point. Play with the scales major or minor pent. Are you playing over dominant 7 or 9 chords, you can try Mixolydian modes. I started by using just the minor pent of the I chord, then I started adding the major pent, then messed with Mixo mode. However, thinking about switching scales seemed needlessly complicated to me so I just combined them.

So it's 1,2,b3,3,4,b5,5,6,b7, but you have to be aware that not every note always sounds good over every chord. You have to just play and you learn when to use which interval. I know it seems like a ton of notes, and actually when you add the notes from the IV and V its all 12 notes, but you're not going to be playing them all the whole time.

Really focus on the intervals and you'll hear right away what sounds "right", like putting a little curl on the b3 when you're stepping down from the V IV to the I. Emphasize the chord tones; that doesn't always have to be the root of the chord. Bending the b3 into the M3 of the I chord is great. The M3 of the V is a 1/2 step from the root of the 1, you can bend or slide between them on the change.

There are so so many different things you can do to accentuate the change. Play major notes over the I for the 1st four bars, then minor when it comes back around. Playing notes out of the chord can add tension. So many things, I'm rambling now, just really learn the intervals and accentuate the chord tones. Write out what works and you'll play without thinking, which is what you want.

You may be confusing the blues scale with major pentatonic. This pentatonic has C D E G and A, so no F (or B).Taking those out of a major scale removes opportunities to play really bum notes anywhere. Nothing will clash with I, IV or V in a violent way.

The standard blues scale notes are C Eb F Gb G Bb. Of which 3 are certainly not in major.They are bum notes, but in such a bad way that when played 'properly' will sound more than just good. Sort of 'sweet and sour'.

However, most blues players will use a combination of blues and maj. pent. in their playing. And other notes that wouldn't appear in either. Basically, if you know what you're doing, every note in the chromatic scale is ripe for use in the blues.

This is not the time to go on about how to play - you asked about certain notes. I hope this makes it clear enough for you to go off and use them !

Not the answer you're looking for? Browse other questions tagged scales improvisation blues or ask your own question.