I'm a guitar player, and I basically want to practice playing my electric guitar and pedal effects along a backing track or an actual song I wanna play along with.

This is how I usually do this:

I cannot play loud all the time because I get complains from my neighbors, and headphones kinda feels incomplete (plus I can't hear all the parts if the song is in stereo).

I need to have the sound in a single output, but I don't know where to look. So, what's your solution to get the guitar amp output and the backing track/mp3 playing in a single audio output? Software/device recommendations would really be great.

What I would suggest is to use an Apogee Jam to plug the guitar into the laptop, where it can then use Amplitube to model the sound of a guitar. Then just play a backing track on the laptop, and listen with headphones. There are some disadvantages to this approach but it has been fairly convenient and produces a reasonably good result. You can also experiment for instance by panning the backing track 70% left and panning your guitar 70% right. It's nice to be able to both hear the backing track and also keep your focus on your own sound, and I do think it can be hard to get this balance in a simple, easy-to-use practice solution.

UPDATE 2020-01-19: This is now a really mainstream thing, with tons of small amps on the market having a line-in socket alongside the instrument socket so you can plug in a phone and get it as a backing track. My Roland Cube mini has it, but plenty of other brands do it too. Some of them even do Bluetooth.

There are quite a lot of products available which take guitar signal and an aux signal, and combine them into a headphone. Here's some photos of some - one cheap, the other more upmarket. 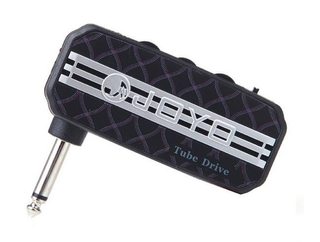 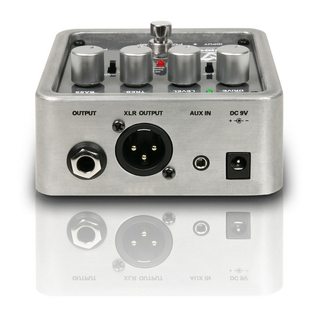 With these one, you would plug the large input jack into your guitar. You would connect an MP3 player (or whatever) into the 3.5mm aux-in, and headphones into the headphone socket.

This one does its own overdrive effect.

You could also use other pedals and plug this device into the output of the last pedal in the chain; and you could connect the headphone signal to the aux-in of any amplifier, to practice without headphones.

There are also similar devices designed to be used with computers, phones and tablets, in which effects are emulated by the computer. This is more expensive, but more flexible, and adds opportunities such as recording.

If "pocket" isn't a feature you want, you could look at using a PA amp with multiple inputs. I have an Alesis portable PA amp with mic, instrument and phono inputs each on a separate gain control. It also has a headphone socket for private practice. If you use something like this, you probably need an amp simulation pedal to make the guitar sound musical. Zoom's multi-FX pedals are a cost-effective option.

If you have a "line-in" input on your laptop, I have three suggestions:

The quick and dirty one is to get a cheap adapter jack, connect your guitar to your laptop through the line-in input and use one of the zillions of free or commercial amp simulators on your computer.

Unfortunately this will not give you good tone, because the guitar output is not suited for the line in input (mic input will be even worse), you'll experience lots of "tone sucking", that is, high frequency loss. But it's easily solvable by using a buffer. Almost any stomp box with no "true bypass" functionality can be used as a buffer in bypass mode. I also successfully used a flat eq pedal for this purpose.

But the most comfortable solution would probably be to buy a hardware amp simulation unit. I don't think they sound as good as the state of the art software solutions right now but I routinely use my Pod X3 Live for home practice (yep, a bit bulky but that's all I have). You can either connect this unit's headphone output to your line in or you can connect a pair of speakers (or headphones) to your unit and connect your computer output to its aux-in (if it has one). Actually the unit that I use also functions as a USB sound card, so I just connect my speakers to it.

Everyone so far has offered software solutions but as I read it you want to practice using your amp and effects pedals rather than substitute with an software based amp sim so I would suggest getting a cab emulator such as the Two Notes Torpedo CAB and run a line out from your amp bypassing the amps internal speaker, use the cab simulator to emulate your own amp (eg. 1x12" combo, 2x12" cab etc) and choose a mic setup that sounds the most natural to you. Then run the output from the Torpedo into your Audio Interface for your laptop and use a DAW or whatever to play the track while monitoring the input from the Torpedo so that you can alter levels. Just an idea.

As the other answers show, there are various ways of combining multiple devices to meet your needs.

However, Tascam have a line of great stand alone devices for your purpose.

I have the CD GT2 and have found it indispensable, it is without a doubt the best music related purchase I've ever made in terms of improving my skill level.

It is completely portable, I have used mine on long bus rides & camping trips.

The newest model is mp3 based and also has recording functions:
http://tascam.com/product/gb-10/

I had the same question and I solved it with a M-Audio M-Track interface. Here is a review here:

I'm playing a regular Fender Strat. The strat plugs into the M-Track and the M-track has a USB plug that goes into the computer. I have a Mac PowerBook running Garage Band but the unit comes with a software package that looks more or less like Garage Band, I just didn't feel like learning a new package. Output is either through headphones or the monitor speakers plugged into the computer. I can add anything in my iTunes Library, including songs and backing tracks to Garage Band and it all mixes together. I'm definitely not all that savvy with either Garage Band or sound electronics so it took me a little while to figure it out, but it works like a charm. Just remember to set the "Monitor" in Garage Band to "on". I paid less than $100 on Amazon, I think.

(Editors, please feel free to clean up my links, I know there's a clean way to do it, I just don't know how.)

I have four things that I use regularly... 1) Trio - You play a progression into it, then it plays back a bass and drum backing track in a selected genre and the key that you played in. 2) Beat Buddy - A sadly named piece of equipment, but awesome drum backing track pedal. 3) Line 6 Amplifi - Check it out. Can totally model sound and plug any of the above into it. You can also connect via bluetooth and play along and model the sound of anything in your music collection. 4) Computer connected to sound interface and nice FRFR speakers and youtube. Massive amount of backing tracks on youtube.

Use two 10-15 watt practice amps like crate or fender? I have two cheap $20 amps, one to take my backing tracks from iphone and the other to play the guitar through. Although im in an apartment and my volume never goes high, so i know amp with iphone cant be damaged. If you want to go loud you may need another option. Just my two cents

For what it's worth. I play my guitar through a MagicStomp pedal, then into a Fender Mustang 2 Moddleing amp. My CD Walkman is put through a small mixer and then out with XLR to a PA speaker. I just have to adjust the loudness of it to match the Amp. I can use headphones also.

There is a simple answer: Go to WalMart, or Target, or Radio Shack (or any other electronic store). Buy the following if you do not already own them:

And voila! For less than $5 ($15 if you don't have headphones already), you can have a great, simple, hassle free setup! Remember, the better quality headphones and cables you buy, the better it will sound. However, since you are just using it to practice and as long as you can hear the legatto's, harmonics, squeals, tones, etc, what else could you possibly need?

Not the answer you're looking for? Browse other questions tagged electric-guitar amplifiers headphones or ask your own question.

1
How to properly record my guitar over a backing track of a song?
23
How to make ASIO work with multiple programs simultaneously : how can I listen to Guitar Rig plus something else through the same interface?
4
What do I need to record my electric guitar with my computer while using headphones?
1
Using a Mac for backing and recording
3
How to mix guitar and other source(laptop, mp3 player) into headphones?
0
How to use Digitech JamMan Solo XT with headphones?
1
How to monitor multiple instruments via headphones?
3
TRRS > 2 x TRS bypass to amplify laptop headphones not working, headphones channel mute