I'm doing some work on a 12-string acoustic guitar, and am planning to replace the nut and saddle. I need to raise the action a little bit for the E and B strings, and also want to change to a slightly heavier gauge, so I'll need a nut with slightly wider slots; the low E string doesn't quite fit in the slot as it is, and heavier strings will make this problem worse.

How much does nut and saddle selection affect tone? I like the tone of the GraphTech ones I have -- it's definitely better than the plastic nut and saddle that came with the guitar. But are there options for anything better?

The self-lubricating factor of Tusq material is very subtle, and though the tone is good, am I better off looking at a bone nut and saddle? Are there issues particular to 12-strings? (The tone on this guitar is quite good, although a little muddy.)

The guitar's pickup is a soundhole-mounted Fishman, so there's no undersaddle pickup to interfere with the acoustic sound.

The nut and saddle simply act as conduits for the vibration of the strings to the body of the guitar--so their effect on the tone of the instrument is pretty small. Other people may tell you different though ;). An acoustic guitar lives and dies by the geometry of the instrument--and the majority of the sound is projected from the sound hold and the top as the body of the guitar acts as a natural amplifier. A better nut and saddle, if anything, will get you much better tuning stability and maybe a little better transfer of vibration from the strings to the top through the bridge and saddle; that could net you a little better sustain from sympathetic vibrations.

To give you some context, all of my electric guitars are equipped with bone nuts--which really cleaned up all my tuning stability issues and squeezed a tiny bit more sustain out of my Les Paul. I couldn't really notice a huge difference in tone based on the upgrades--which was from the cheap-o stock plastic nuts.

It also sounds like you are struggling with the lack of bass on your 12-string. Going to a lower gauge string set is a really good step in this direction, but a 12-string guitar is going to naturally sound brighter than a standard 6-string acoustic. Why? Well take a look at these two graphs: 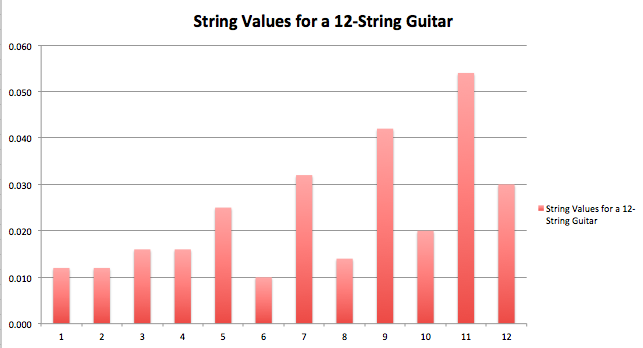 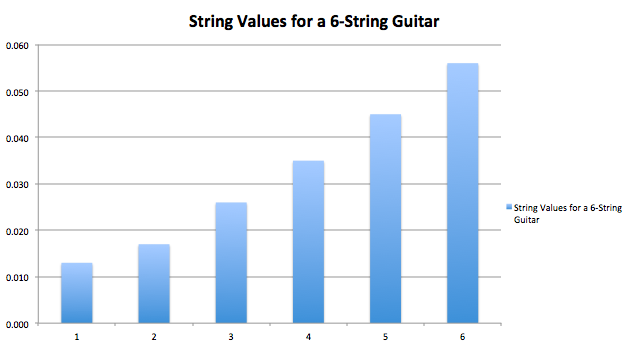 Forgive me for getting all nerdy on you :D. Basically what you should take away from this graph is there are roughly 3 times the number of smaller gauge strings on a 12-string than on a standard acoustic assuming the cutoff is below the low D (0.036). The ratio is 3:9 for those of you math aware. So, from this you can see that the smaller, higher voiced strings have nearly thrice the presence--which will get you three times the highs. Note that I did these calculations using a medium set of Elixer Acoustic Phosphor Bronze and a medium set of Martin 12-String Phosphor bronze.

So there you have it :D.

Not the answer you're looking for? Browse other questions tagged maintenance acoustic-guitar 12-string-guitar or ask your own question.

6
How does the angle of strings above the headstock affect tone and stability?

10
Restringing a 12-string guitar with heavier strings - is it possible?
7
Why does the bridge saddle on a steel-string guitar sit at an angle?
8
Is it an advantage for the headstock geometry to minimize the string deflection between slot and tuning peg?
2
Does 12-54 to 13-56 gauge change require a re-setup?
2
Will lighter strings extend an acoustic guitar's life?
1
How to accurately drop-tune an acoustic guitar?
4
How much is nut-width and neck-width a worry for finger-style playing?
1
Strings imbalanced on acoustic guitar with humbucker
2
Sudden death of Fishman preamp on acoustic guitar
2
Using Capo to Unstring and Restring the same Strings (Acoustic Guitar)