Does string length affect intonation? Like on a Les Paul Jr. that has a wraparound bridge but intonation is still flat. If I use a Bigsby type tailpiece to correct the intonation would that correct the problem?

strings intonation
Share
Improve this question
edited May 9 '15 at 15:43

Yes string length does affect intonation and so does a proper set up with regard to neck, bridge, string guage, and action.

Before going into any Bigsby enhancements lets review the key differences between a Gibson Tune-o-matic bridge vs. a Wraparound bridge. The Tune-o-matic allows for fine tuning the intonation, while the standard Wraparound has fixed saddles. However, there is some debate over which one offers the best sustain. I have a Gibson SG and a PRS Soapbar II each with a wraparound and a Fender TC90 and Gibson Les Paul studio each with a Tune-o-matic, I believe that the Wraparound offers better sustain as it adheres to the body in one piece, but like I said this is not something everyone agrees on. Here are some opinions I culled on this: 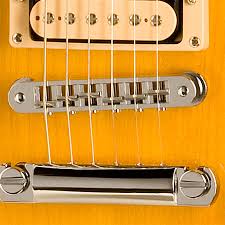 Alternately there are adjustable Wraparound bridges as cited here: 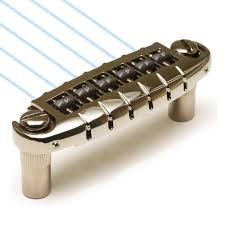 Here's a handy check list before changing the bridge.

1) have the present guitar properly setup by an experienced Luthier.

2) does this get your intonation in the ballpark or better?

3) ask this expert about your bridge options.

4) compare and discuss with other colleagues who have resolved this in the past.

I would not go with a Bigsby type tailpiece unless you really want to add the vibrato as this is a big change to your instrument while the other options above are less of a change.

Also, any changes will affect the value of your guitar from a collectors point of view, however, if it is not playable, then you have to do what you have to do.

UPDATE: July 14th, 2014: I think both Fergus and Meaningful Username brought up a very significant point that I omitted and that is the specific points where length will affect intonation: nut to bridge.

Another thing that I omitted and I thought about over the weekend (I should mention I don't have internet at my home/studio where I spend my weekends...yet), is that I failed to ask Docp602, is your Les Paul Junior an Epiphone or Gibson and what year was it made?

I had at one time an Epiphone Les Paul Special II which I got new around 15 years ago. It had a Tune-o-matic bridge but the saddles were so...not sure if the right word is brittle or ridged, that it was causing my strings to break under normal use.

I eventually had a luthier install a Gotoh bridge with Graph Tech graphite saddles which resolved this issue. I should mention too that the original Epihone Tune-o-matic was not able to be retro fitted with the Graph Tech saddles.

I think I paid like $160 ish for the guitar brand new, and about another $150 to make the changes some 2 years later. I eventually gave it to a friend that needed an electric. It was not a bad starter guitar, but I had noticed that I no longer enjoyed playing it.

My point here is that generally speaking a Gibson version of a Les Paul will have higher quality parts and a higher quality build. Before Epiphone merged with Gibson in 1957, they were contenders. Epiphone still makes some wonderful gear (Gold Top LP, Casino, etc) but at the low end where Gibson positions them in the market, there may be some quality issues.

To clarify some points: It's the length of string between the saddle and the nut that affects intonation. An adjustable wraparound will fix intonation due to that length being adjustable. The part of the string after the saddle does not affect intonation, as noted by @Fergus. So yes, string length matters, but not the part behind the saddle like you get with a Bigsby.

Not the answer you're looking for? Browse other questions tagged strings intonation or ask your own question.