What are the Coltrane Changes?

What are the Coltrane Changes? What's the theory behind them? How are they used in improvisation, harmonization, and reharmonization?

The questions you've asked make for a great logical flow, so I'll structure my answer around those questions.

What Are the Coltrane Changes?

"Coltrane changes" is the name for a chord progression that jazz saxophonist John Coltrane used extensively in his playing and composing. They are generally considered to be a substitution for a 4-bar ii-V-I progression. For example, here is a ii-V-I in C maj:

Here are Coltrane changes in Cmaj (which could replace the ii-V-I from above):

The Coltrane changes contain the original ii-V-I, but between the ii (Dmin) and the V (G7), there are four additional chords. The progression still ultimately resolves to Cmaj, which is the final chord found in bar 4. That's why this progression is considered to be Coltrane changes in the key of C.

What's the Theory Behind Coltrane Changes?

Then we add the V chord for each I chord, a classic maneuver with bebop reharmonizations:

In their purest/simplest form, Coltrane changes are played as a four-bar substitution for a ii-V-I progression. Anywhere you see a ii-V-I that lasts 4 bars, you can replace the ii-V-I in Coltrane changes. The most famous example is Countdown, which is Coltrane's reharmonization of the Miles Davis song Tune Up. Here are the chord changes for Tune Up, with Coltrane changes written in parentheses in purple on top: 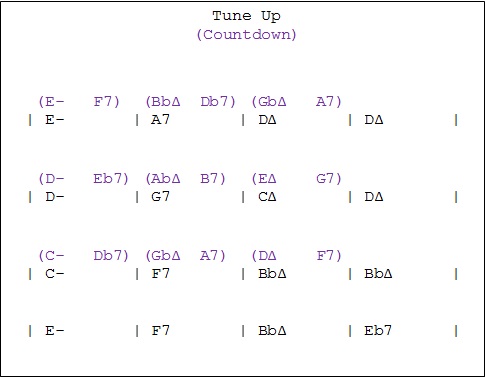 Three sets of Coltrane changes are seen in this song, on the first three lines:

This second usage begins with Cmaj (the final I chord) instead of Dmin (the ii for the final V-I progression). These changes are found in Coltrane's blues called 26-2 and in Coltrane's famous song Giant Steps.

How Are They Used in Improvising?

In the songs I've shown and mentioned, the Coltrane changes are written into the tune, as a composed reharmonization. However, Coltrane changes can also be used, impromptu, by a soloist when improvising. If a horn player starts soloing over Coltrane changes, the rhythm section can either continue playing the normal ii-V-I, or they can hear the soloist and follow him/her. (Of course, this requires a good ear and proficiency with the Coltrane changes.)

Not the answer you're looking for? Browse other questions tagged theory harmony jazz or ask your own question.

7
What are the patterns of the minor scales
9
How to determine what key changes are appropriate?
9
In jazz, what is a chord family?
20
What is a multi-tonic system?
5
What is the Slonimsky-Schillinger Symmetric System?
12
What is the four tonic system?
23
What is a secondary dominant chord?
9
Black keys - what scale are these, how to use them?