How to give a song this sense of "conclusion"?

Alt-J's first album ends with the song Taro -- a song whose outro leaves a very strong impression on me. The outro sounds like a very fitting ending to any album, because the music simply gives me that aforementioned sense of accomplishment, as if arriving after a journey. When I first heard the outro, I immediately knew that this was the last song on the album, simply because of some qualities in the music.

My question: is there a certain composing technique that causes the music to convey this sensation? If so, what is it? I am very interested in attempting to write something similar, just because this intrigues me to no end. :-)

Without getting into an entire lecture, here are some things you can do to make someone feel as though a piece of music is being concluded:

Obviously these are just a few thoughts, but should provide a little clarification.

There is an interesting irony here, because the song Lee linked to ("Taro") doesn't do any of the things that one would immediately think of as concluding: it doesn't actually bring the rhythm to a stop, nor does it end on the tonic chord. Instead it fades out on a repeating, open-ended cycle of simple diatonic chords (ii - I - vi - V).

I would guess that the sense of conclusion comes from the fact that everything but that simple cycle of chords is stripped away, layer by layer, until it alone is left to cycle, in effect endlessly, and then drift away from us into silence. This feels more like the way many things in the real world actually end: without a clear marker, fading into the next thing or into the flux of the world, so that we only realize afterward that it has been "over" for quite some time. Nice!

I would recommend a I64 V I cadence, with the bass going "so so do." For example in C major: 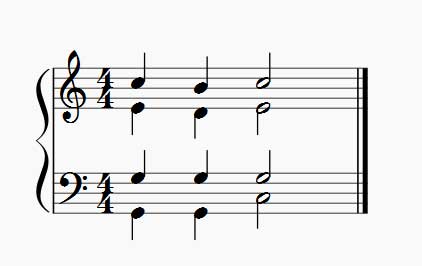 I see jjmusicnotes recommended cadences, and this one is the most common.

Not the answer you're looking for? Browse other questions tagged theory composition or ask your own question.

2
How to give voice into a chord progression?
28
How to create Chord progressions that make sense
9
Why do we have key signatures as they are? Could a key with unconventional accidentals make sense?
0
How to compose a new song when inspired by existing song?
7
Does the ability of reading and writing music on staff help with learning music fundamentals?
2
Does this song have a tempo or time signature?
3
How can this triad from the song "Believe" be analyzed?
3
How can I overcome this difficulty?
4
How can I reproduce this harmony?
3
How do the chord progressions in the song "Raw Sugar" by Metric make sense in theory