what kind of equalization is done for different music genres for your guitar tone?

I have articles which say that if you are into classic rock and metal then you should have more of MIDS etc can some one please provide information that for different kind of genres what kind of EQ is desired in the guitar tone. Please elaborate on the following :

please explain in brief how eq the above stuff defines your tone and how should a novice approach eq and what other genres of music use what kind of specific eq.

Do you think B.B. King's guitar sound is anything like Stevie Ray Vaughan's? They're both labeled as "blues".

Do you think Jimmy Page's guitar sound is anything like Brian May's? They're both labeled as "classic rock".

Do you think Randy Rhoads's guitar sound is anything like Dimebag Darrell's? They're both labeled as "metal".

I guess you see where I'm going. Guitar sound is a HUGE subject. There are no hard and fast rules. Everything depends on what you want to hear.

Having said that, there are stereotypical guitar sounds for certain genres. I'll take the risk of sounding stupid and try to give my own recipes:

For blues, I prefer a gain level where you can distort when hitting hard and clean when touching softly. Try to get as much of your distortion as possible from your power amp (volume) instead of your preamp (gain). Set your bass so that it doesn't "boom" when you play the lowest strings. Set your trebles to a level where it doesn't scratch your ears and set your mids high enough to cut through the mix without being overly nasal. No one can say the exact levels like B:4,M:7,T:5 because it depends on your guitar, strings, amp, cab, mic and room.

For classic rock à la Led Zeppelin, add some more power amp gain and if it sounds too nasal cut some mids or add some bass and treble. Nothing drastic though, don't go very far from the blues sound, just make it a little more aggressive.

For classic metal à la Judas Priest, add some more bass and treble. Add some preamp gain but still try to get as much distortion from the power amp as you can.

For post-Metallica metal add some bass until it "booms" slightly and some treble without sounding fizzy. Cut some mids but don't overdo it, for most people scooped mids only sound good with palm muting and you won't be palm muting all the time. And get most of your distortion from the preamp instead of the power amp.

For extreme metal, add even more gain and bass. You can cut some more mids here but be sure that you still cut through the mix.

The eq settings on the amp are usually close to the same on Rock and other styles. Metal can go to extremes by cutting mids. The mids usually are more in control of the overall tone. I usually have Bass - 7, Mid - 6, Treble -7 for Classic Rock and Blues. Play a chord and let it sustain while turning one knob up and down to hear the difference. If you were to increase the treble you would hear the high notes of that chord are more noticeable. Try other knobs and you will find a tone you like.

Typically you already have mids prominent when you play through an amp as electric guitar amps respond more in the mid range than the low or high range. A lot of mids when you're using distortion will make the sound "muddy", which people like for some stuff.

I use a BOSS GE-7 equalizer as a clean volume boost and also to shape my tone. I usually have it in "smiley face" configuration or flat, but you can use a GE-7 before distortion to really shape the tone. Try GrailTone.com for a good collection of different GE-7 settings for various tones. 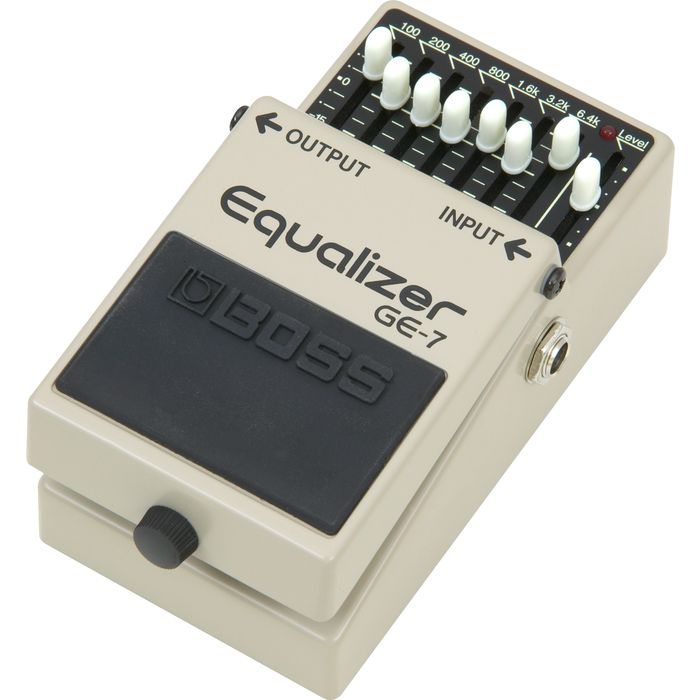 Not the answer you're looking for? Browse other questions tagged guitar electric-guitar guitar-effects tone live-sound or ask your own question.

10
Playing clean arpeggios on a lapsteel guitar
18
Is the sound of a semi-hollowbody guitar significantly different from that of an equivalent solid body?
0
Doom/Melodic Death Metal for electric guitar
4
Choosing a guitar stompbox for producing moderate distortion (general advice)
4
Tips for creating a dynamic guitar tone?
2
What Adds “Cream” to a Guitar Tone?
3
Different capacitor values needed for baritone guitar tone controls?
1
What is the difference between lead and rhythm guitar tone?