While looking at several images of classical guitar headstocks, I noticed that there seem to be several ways people wind their strings on the capstans.

I have always used the variant where I wind the A, D, G and B string towards the inside: 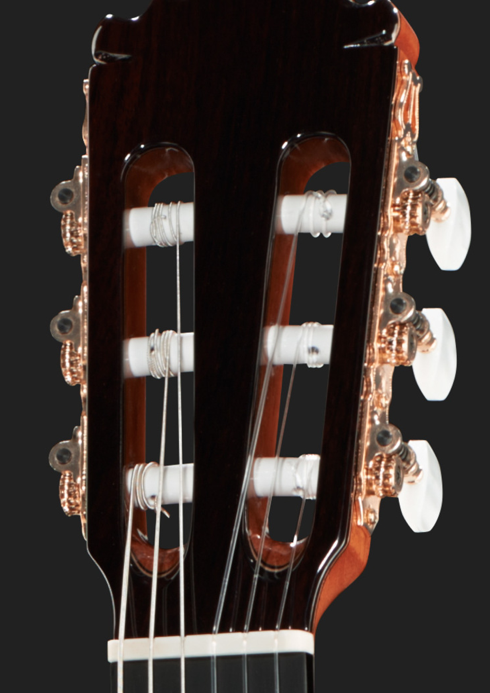 But the other variant is to wind them all towards the outside: 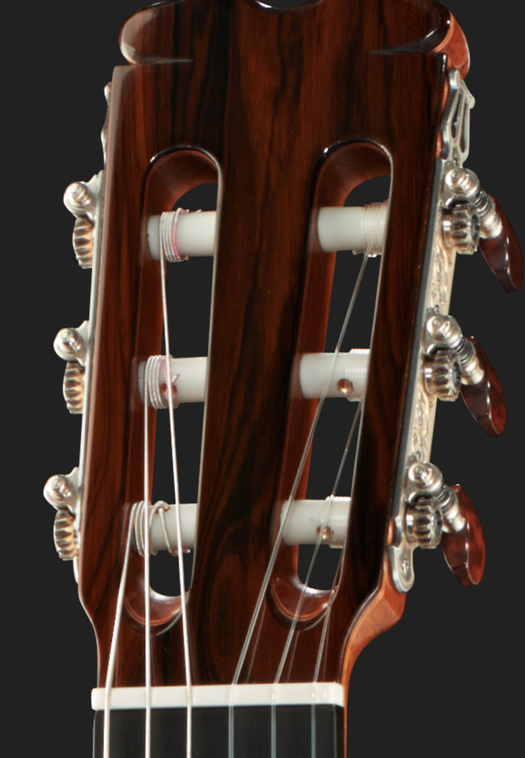 (Note: These are images of some very expensive guitars, so I assume they know what they're doing?)

What would be the advantages/disadvantages of the second alternative? Can it be bad for the nut? Or does it depend on the guitar?

Here are a few of my own thoughts, but they are mostly theoretical:

So I would like to try the second alternative, but looking at how the nut on my guitar looks, it seems that its notches have already been a bit indented to the left/right of the D/G strings. Currently, the amount of that looks just normal, but I assume this would get more pronounced if I use the other stringing alternative. I wonder, if this matters at all?

It's not going to make much difference on a classical guitar. Optimum would be that the strings follow straight lines over the nut to the tuner capstan, as there is slightly less stress sideways.So, if possible, finish the windings so that the string is as straight as it can be.

On electric guitars, with vibratos, it does help if this is the case.This was a reason that Leo used when inventing the Strat, although not all heads gave exact straight lines for all strings.

Obviously, on '3 a side' heads, it's almost impossible to do this, so a compromise is made.

More importantly, maybe, is that all three strings on each side are fed on the same.Sounds obvious, but I've seen guitars that teachers have re-strung, two one way, the other opposite.A pain when tuning !

Sometimes, it helps to wind a string over itself to stop the possibility of slipping.

Not the answer you're looking for? Browse other questions tagged guitar strings classical-guitar or ask your own question.

10
Restringing a 12-string guitar with heavier strings - is it possible?
3
How much overtension can I put on a guitar string before it snaps?
3
Guitar not holding tension
8
How can I improve my classical guitar vibrato technique
0
Re-stringing a Classical guitar
1
What are the best strings for this guitar? Steel or nylon?
4
How does changing a guitar string's tuning affect its timbre?
0
Guitar pitch changes with pressure applied to neck
6
Why won't the top three strings change pitch
0
Installing Ball-End Nylon Strings on a Classical Guitar