So I am a beginner player of guitar, I have a steel-string acoustic guitar and I've been playing for over a month now being able to play D,A,E,C, G, Am, Em chords very cleanly and now I am learning the barre chord F now I've experimented moving down the fret board and playing the F barre chord and it gave different variations of pitch which sounded familiar to some of the major chords I can already play:

is it correct for me to say that barre chords can be able to replace any if not most major chords if you know exactly which barre chord to play and knowing which scale down the fret board to play it?

Do you feel that barre chords can sometimes be a lot more effective to strumming out particular chord progressions over major chords due to minimal chord changes concentrating on efficiency and at the same time also give a more vibrant sound than a major chord being played through a barre chord (if my first question was true)?

Yes, if you move a barre chord to a different fret it becomes a different chord. The one you have used to get the F chord sounds like the E-shaped barre chord.

There are a total of 5 different barre chord shapes and they are all based on the open shapes of chords. 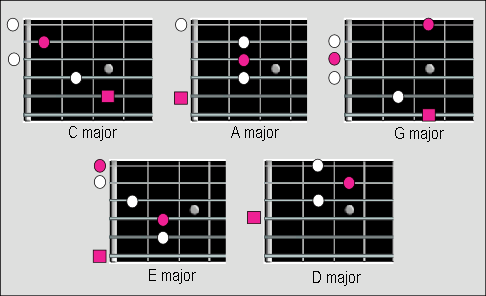 As you can see in the picture above, these are the 5 open chords and thus each can be made into a barre chord by "barring" a desired fret and making the shape of the chord. The red spots in the picture above are the root notes of the chord; as the chord shape moves up and down the neck, the chord takes its name from whatever this root note becomes. For example, if you played an E-shaped barre chord with the barre on the 5th fret, you would be playing an A major chord.

The E, A, and C shapes are the easiest to play, but with practice the others will become easier to play and allow you to play chords almost anywhere on the guitar.

As for which is more effective it depends. If you are playing riffs and licks higher on the neck it is typically easier to grab the chord on the higher frets, however each shape has a slightly different voicing and so some may be more preferential to use based on the voicing itself. I know I've played ongs where only a certain barre chord sounds right for a chord.

Adding to Dom's answer,yes, there will be more efficiency in changing chords, using barre chords. In a piece with quite a few changes, it's often possible to move from any chord to the next by moving two frets maximum, sometimes one fret, and even no frets at all.Take a simple 3 chord song in A. Play A on the 5th fret barre, with an 'E' shape. Same barre will work for the oft found D, but on an 'A' shape. Either move 2 frets up with that same shape to play E, or one fret down with a 'C' shape, for E. Or- you can even stay on the same place, and play a 'C7' shape, giving you an E7 chord. Thus your fretting hand stays in exactly the same place !

Strum-wise, barre chords can be better and more effective than open chords, particularly when playing a staccato (stabbing) type rhythm. Every string can be easily stopped by releasing pressure in your fretting fingers.Similar will be 'dead' strums.(Often shown in TAB as xxxxxx).

Not the answer you're looking for? Browse other questions tagged guitar chords acoustic-guitar or ask your own question.