On Jazzology chapter 2, exercise 6, example 2, I have to identify this chord (if it exists):

I thought that it was Cmaj7(b9). My train of thought was (from the lowest to the highest note):

But I looked at the solution and I saw that the chord displayed is wrong; there isn't any such chord.

The only thing I can see that could be wrong is adding the b9 to a major 7th chord.

Am I allowed to add a b9 to a major 7th chord in Jazz?

Adding a b9 to a major 7th chord creates a very dissonant sound because the chord has two different notes that are each a half step away from the root. The resolution would be tricky because the b9 would want to go down a half step and the 7th, and the root also needs to go somewhere.

That being said, however, I found a few voicing that sounds good for it, though, and it seems it would work well as a non-functional passing tone. As Sir Duck would say :

If it sounds good, it is good.

So as long as it fits wherever you put it, it should be fine.

When playing around with the concept, I found going from a C9, then letting the D go down to a Db, then going to a Fsus4 finally resolving to an F. Not the prettiest sounding progression ever, but I like it.

As for voicings, inverting the chord does not work. I did not find a voicing outside of root position that would work. Spacing out the root, 7th, and b9 really help pad the dissonance. Omitting the 5th also helps. The voicing I liked best is below and has all the notes. 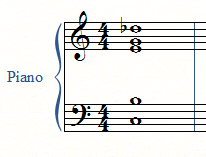 You can do whatever you want, which is the beauty of Jazz. It's more a matter of whether other people will still call what you're doing Jazz.

I've implied a flat 9 (which I generally consider an energized root rather than a lowered second) in a piece with a simple, whole-note melody within Db maj of Db-C-D-Db. This works to my ear (and is followed by G maj, E maj, Db maj, to give you some context).

It is going to have more 'dissonance', but this can work fine depending on how you do it. Playing those notes in different octaves and/or with different instruments whose timbres are distinctively different are two tricks. Avoiding playing the two notes together or moving among them quickly are two more. On the other hand, sometimes the extra tension among notes is something we want. Consider Jerry Lee Lewis's right-hand clusters in some of his soloing, or the tense, stabbing strings portion of Stravinsky's Rite of Spring (Dance of the Young Maidens).

Digressing a little, I think that a lot of Westerners, upon hearing a raised root, expect a minor 7th, but you can get a nice and unusual mood from having both a leading tone above and below, and providing the same for the 5th can work well with this, too. For example, C-C#-E-F#-G-G#-B-C .

Here's an example of this sort of thing, and note that if we were analyzing as Jazz we'd probably imagine a 9th which contains the elements you mentioned:

There are major 7ths in this piece, though not all of the 7ths are major. To feel how the notes play together, if you have the means you may want to run this piece through delay or reverb so that the +1 and -1 rub together.

Not all music picks either a major or minor 7th, 3rd, or raised 4th over a "perfect 4th" and sticks to it, and in fact I prefer to avoid this scale-derived nomenclature unless communicating with others who rely on it, as it engenders a mindset which encourages such adherences. To me it's more freeing to think in terms of scale degree while remembering the relative resonances between degrees. Some Jazz traditionalists seem to frown upon this and prefer the prevailing nomenclature.

One more I happened to notice after my last edit:

Very nicely expresses the idea of those two notes, at least one way of using them. Start at 4:30.

I believe this is exactly what BBNG makes use of in their song CS60 on the first chord when the melody comes in. It sounds to me like an Ab major7 (b9) than then resolves down to the root, G minor and continues to Eb and then basically D minor (the diatonic VI and v respectively). The melody notes go from b9 to major 7 and it works really well in giving it this strange Eastern flavor that people in previous answers have referred to. I think the quavering pitch on the lead synth helps to make enforce that as well. The half and whole step movement throughout the progression on this first part, I think, contribute to the overall strength of the progression.

The major chord is generally the most stable of structures and is where harmony comes to rest, like a full stop. Major chords can feature a raised 4th aka the Lydian sound, but these alterations to the basic chord are more to add colour and nuance whereas a minor 9th tends to destabilise the chord and thus it conflicts with its purpose in life, which is to provide stability and consonance. One would expect dissonance to be provided by the dominant chord. So in conclusion, I'd not expect to see a major with a flat 9. It conventionally would have a 1, a major third, a fifth and in the context of a major 7th chord, a major seventh note. Potentially an added 9th too for more upper tone colour.

You can sometimes hear maj7b9 chords in the music of Brad Mehldau. A possible function is as a replacement for the V7♭9 in minor: In the key of E minor, I might play a Bmaj7b9 chord, where the major seventh comes from E minor blues scale. But Mehldau usually uses the maj7b9 chord as part of a four-chord vamp section without an especially strong sense of key center. I believe he uses a maj7b9 (or inversion of it) in the third bar of "You Can't Go Back Now":

To add onto Dom's answer, another way jazz pianists sometimes create a sense of order in dissonant chords like this is to try to create a major triad in the RH. For this chord, an A triad gets us two of the chord tones, and then we can play a B in the left hand if we want.

On paper, this looks like Cmaj13b9, which you might expect to sound more dissonant, but I find its sound preferable to a Cmaj7b9 voicing that includes the fifth. When the fifth is present, the note G creates a tritone dissonance with the ♭9 that both adds to and distracts from the ♭9 dissonance that gives this rare chord quality its unique character.

My voicing is the first, while the one Dom likes is the second:

Notice that your textbook also omits the fifth, probably for the same reason.

4
What scales can I play over Maj7 with lowered ninth?
2
Are there modes beyond Lydian?
2
Simple little questions about available (ex)tensions

5
What note type in the 7th of a chord? - Music Theory
5
Building Lydian chords
8
When is a note b5 and when #11?
4
Chord construction using the minor scale
1
A#sus4 or A#add11 Chord?
1
How to identify the chord progression and a specific chord
6
Are modes in jazz primarily a melody thing?
2
Chord inversions? What does 'C' mean one to play?
1
Core tones in chords
1
Proper naming of chords