When to use a dot or a tie in music notation?

Let's say I have the following piece in 4/4, Should it be notated as:

Are there any specific rules? From my previous experience, I believe the second one is the correct notation since it shows all the beats in 4/4, am I correct?

Yep, the second one is far better for precisely the reason you say. A general rule is that you shouldn't have dotted-notes that start on an off beat and carry through the next beat. There are exceptions even to this rule, but showing the underlying beat structure of the meter is paramount in the vast majority of situations.

Elliott Carter is an example of a composer that often violates this notational rule (sometimes using four beamed dotted notes, occasionally even crossing the barline), but this is for the specific purpose of notating multiple simultaneous tempos. Even with that reason, an argument could be made that it isn't worth it due to the difficulty with reading it.

If you are referring strictly to music written obeying to traditional rhythmic conventions (with rational time signatures and regular/even division), then your second example is more suitable. Please keep in mind that the first example is not wrong, but the second will make sight-reading much easier, as our own expectations when seeing a piece in 4/4 make us search for known beat patterns.

One possible exception is the dotted quarter, which can be exchanged with a quarter tied to an eighth. For example, the following fragment

is orthodox regarding to rhythmic division, but

is easy enough to read and can be more straightforward for those who are used to this kind of rhythmic figure.

This exchange can be especially useful in 3/4 meter, when you want to avoid a 6/8 feeling. For example, in this fragment

the continuous repetition of the pattern can lead, by assimilation, to that feeling of 6/8 (counting "1, 2" instead of "1, 2, 3"), as the dotted quarter is the time unit for such compound meter. Using, instead,

will highlight the first, second and third beats, visually aiding the reader to not assimilate the beat pattern to a binary compound meter (well, I know it has also to do with beaming of the notes, but I think you got what I mean).

As Pat Muchmore said, you can "break" these rules when working with unusual/irrational time signatures, free meter or other ingenious procedures (as is common with Elliot Carter's metric modulation, for instance). In such cases, you are the judge of what is more suitable or appealing to what you are trying to accomplish.

Here's a common chart showing how the notes break down: 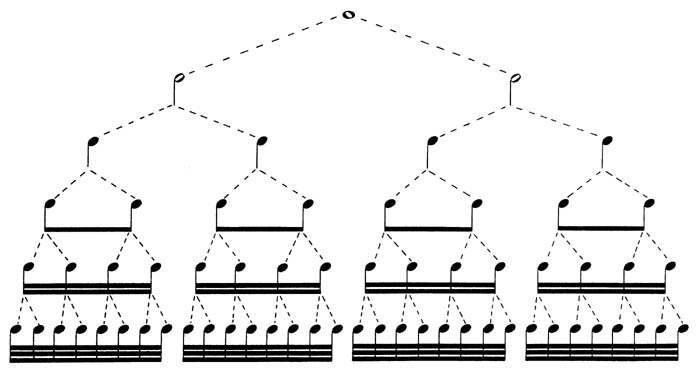 Your first example has the 3rd eighth note of the bar borrowing from its cousin, the 2nd eighth note. So this is "bad". The second way would be the proper way to write it.

Note that there are always exceptions to every rule, but it's good to follow the rules unless you have a really good reason not to.

The ideal is to keep each beat self-contained, so the second is preferrable.In 4/4 it's certainly best to keep each half of the bar separate, so anything which goes between beats 2 and 3 are shown as tied.It's easier to read, and the ties actually make you aware that the tune is syncopated.The same thing should happen in 6/8 too, which is effectively two halves of each bar. Some more modern composers and re-writers don't feel the need to do this. Change will happen slowly, but for now, at least, let's keep it easy to read - and probably easier to write (longhand at least).

It's good to see the dots alongside tab, so the rhythm can be followed, not guessed !

Correct. There is a subjective component to this decision, but you generally want to keep the placement of the beat as clear as possible.

The rule of thumb is that when a note doesn't begin on a beat, it should not cross into another beat without a tie, unless the notation is simple enough (e.g. quarter, half, quarter) that there is no ambiguity in how the rhythm lines up with the beat.

It is a question of style. The music of the last centuries is not subtle regarding its rhythmic stresses. However, Renaissance and also some Baroque music does not have the same forced substructures of today's rigid meters as well as a central beat, so the "helpfulness" of substituting more complex note constructions for a rhythmically shifted variant of a straightforward melody is limited and sacrifices the self-consistency of the melody for adherence to a metronomic meter that may not even be dominant in the other voices.

The notation impacts the performance. While percussive instruments like pianos and drums are not really in much danger here, continuous sound instruments like vocals, bowed strings, and wind instruments have a tendency of putting additional stress on the on-beat parts of syncopated notes. Which sort of defeats the whole point of syncopation.

Renaissance music consequently often tends to be notated using "floating barlines" between the staves where not even a barline is sufficient grounds for subdividing a note value into an off- and on-beat part.

While the same is no longer customary in Baroque music, the execution of syncopated passages is still very much expected to be indistinguishable from a shifted version of the original melodic fragment.

This kind of non-syncopated syncopation stops being feasible when "swinging" meters come into play where the central rhythmic framework is so rigid that time can be warped around it and on-beat notes have different lengths from off-beat notes.

Basically these days, every music piece is what was previously considered a dance regarding the prevalence of a real or imaginary driving beat. In that context, not burying an on-beat in the middle of a note makes perfect sense, notationally giving the central meter priority over the inner melodic logic of a voice.

As others said, the second form is probably more common, but I'd like to put in my own opinion.

Since the 3:3:2 rhythm is common in music I deal with, I prefer to notate it additively (like your first option, with the first three notes all beamed together). This option also looks cleaner, at the cost of being difficult to recognise for people unfamiliar with the rhythm.

At the end of the day it's really a matter of preference to the composer. Most of the responses that I've read claim the second example is 'right' or 'easier to read' but those are truly opinions. It is my opinion that the first example is preferable, and that's the one I'd use. It has to do as much with how I was taught to read sheet music as it does the music itself. I would only use a tie as a slur between two different notes, and it's mathematically more complicated for me to read it in the second example. The dotted eighth in the first measure represents 3/16th of a beat. The tie in the second measure demands that I add 1/16th & 1/8th together, leading to extra math and at the very least a more difficult sightread. While it is a purposeful goal to make the music you annotate or compose legible and understandable, there is no real right or wrong here.

Not the answer you're looking for? Browse other questions tagged guitar theory notation sheet-music rhythm or ask your own question.

2
Working out strums per second given beats per minute - using guitar tabs
7
Convenient notation for doubletime
7
How does one know if a score is notated well?
2
Rules For Notating Tuplets
7
How to clearly notate tuplets, both "simple" and "complex," in irregular meters
10
Most complex "block" of sheet music notation
7
Notation precedent for alternative ending when playing movement as standalone piece?
4
How to write string divisi sections w/ different instructions correctly
4
Music Notation (in Musescore) - Ties or Separate Voices?
4
Chopin notation question / what notes do I play?