Harmony in Phrygian : What chords are tonic, subdominant, and dominant?

Phrygian is a very distinct sounding mode. I've been trying to better understand the harmony of the mode so I can use it more. Obviously the i chord is a tonic chord and iv is a subdominant chord, but the other chords in the mode seem not to line up right. For example, there is a vo chord, which does not lead back to i, and instead leads to VI, and the II chord seems to act much more like a dominant chord then any other chord in the mode.

So what chords are tonic, subdominant, and dominant in Phrygian?

You can't really apply these functional terms to modes. A mode refers to a specific scale and its characteristic melodic phrases. The problem with Phrygian, when you try to build classical harmony on its scale, is in fact constructing the "dominant" harmony, i.e. the triad on the 5. step. It has a diminished fifth (in "White Key Phrygian" on E this would be B-F), so you can't get a major or minor triad.

But let's ignore that for a moment and try to construct a chord from the Phrygian scale which is "dominant" in that it leads back to the "tonic". We'll have to look at Gregorian Chant and pre-Baroque polyphony:

Now moving on to two-voice counterpoint. If your main voice (in medieval terms, the "tenor") has the typical closing phrase F->E, you can make a two-voice cadence by adding an upper voice (a "discantus") which forms a major sixth with the tenor, resolving to an octave: D->E. Now you have the two main parts of a polyphonic Phrygian cadence.

You can now add more parts ("contratenores"). For example, if you insert a middle voice between your tenor and discantus (a "contratenor altus"), you could let it move in parrallel with the discantus: A->B. That would be a typical three-part Phrygian cadence, ending on a perfect harmony:

So, if you translate that to classical harmony, in this example a d-minor chord (in first inversion) functions as the "dominant". But of course, as said above, these terms don't really fit.

I haven't ever encountered this topic in a theory book, but I think an empirical approach would produce good answers. The method I'm envisioning is: find a bunch of songs written with a phrygian tonal center, pick out common chord progressions, and determine the chord functions based on how they're used.

From those progressions, we could deduce these functions:

The only chord missing from this list is the vo chord (or vø7 if the 7th is included). I can't think of any progressions involving the vo at the moment, but my intuition is that the vo chord plays more of a subdominant function than a dominant function. For example, I can imagine a vo-vii-i progression sounding pretty straightforward in a song written with a phrygian tonic.

As a side note, I do think this question makes sense to ask. Many songs exist that have phrygian tonal centers but are non-modal. In these songs, the chord progressions include the sort of resolution that modal tunes actively try to avoid. For all such songs, I think it's useful to consider a phrygian tonal center and figure out the traditional function that each degree plays.

Dominant, subdominant etc. are terms from functional harmony. You can give a modal flavour to functional harmony (throw in some ♭VII or #4 notes) or you can give a functional flavour to modal harmony (stick the sharpened leading note into the cadences of 'Greensleeves'). Music (as all art) thrives on cross-breeding, there's no special virtue in being pedantically functional or pedantically modal! But when you do this, it becomes pointless to impose the strict theoretical labels of one scheme or another.

You can build a triad on any note of any mode. If the 5th note of the mode happens to be a perfect 5th above the tonic (I think we can allow every mode to at least have a tonic? Unless you count the whole-tone scale as a mode?) it will have some of the character of what functional harmony calls 'dominant', a tendency to resolve to the tonic. If it also contains a major 3rd, we've pretty well got a dominant, if we choose to use it as such.

Again we are mixing styles and terms of analysis of different epoques. OP question is interesting but it won’t help much to juggle a lot with the function terms or the roman letters or chords.

However - it isn’t forbidden to try to do so.

jdjazz is right: only an empirical approach will bring clearness but even then we wouldn’t know wether this investigated songs were based on rules, laws, misunderstandings, errors, ignorance or original inventions.

Anyway, we wouldn’t be surprised to find music in Phrygian mode with a dominant V7: right the one degree and function that should contain the elements of this specific mode. (Why not? analogically to the major V in harmonic minor ...) or should we say then: This tune is in phrygian mode with a harmonic close?

It is like the orthography in language: Music and languages are living culture. And what is living is changing.

In the Phrygian mode, harmonic functions are represented by the following triads:

In classical music, the S–D–T essential harmonic turnaround in the Phrygian mode cadences often has the form II–vii–i. The vii subtonic chord is considered to be the most acceptable chord of the dominant group for cadences.

In popular music, the use of the Phrygian mode is often reduced to alternating Neapolitan and tonic chords as seen in David Bowie's Space Oddity. The II–vii–i turnaround can be found in the jazz composition Warm Canto. Harmonic analysis of both tracks is given here.

In classic music theory, when you see that the 7th note of your minor scale is not augmented, then you use the phrygian chord progression. The chord functionality never changes.

The III is considered to belong to T and D team.

What changes in modal harmony, is the tonal centers. Since you begin with the 3rd note of your scale

E is the I

A is IV and

Now, what happens if a phrygian mode appears somewhere in a diatonic work?

For example in Amin if the 7th tone is G and not G#, then you have to follow some different rules.

Because of the fact that the V is not major anymore, progressions such V-IV are allowed, for we don't have the G# to A resolution. One easy way to approach this type of harmony is this:

Try to discover the second 4-chord of your minor scale descending. For instance,

Then apply the following harmony:

If the second 4-chord is in the Soprano voice, you can also apply

Note that in the final chord the V must be major. This is how you declare the end of the modal harmony. If you have some more notes before this very last E, then you approach all these notes with phrygian mode harmony and in the last E you augment the 7th note.

Tonic, dominant, subdominant - or more likely the meaning of the OP - harmonic functions tonic, dominant, pre-dominant were introduced long after the modal style, even after Mozart and the classical style, and they apply to the major/minor system of keys. The concept is called functional harmony and it has a lot to do with the formal ending of phrases, cadences, and how those define musical forms.

The modal style, Renaissance modal style, had it's own sense of formal closings, but used different musical devices. Two to consider are the final closing clausula vera and an alternate closing the plagal cadence.

The book Plain Song by Thomas Helmore gives some scale harmonizations in modal style which I found very helpful. Here are the authentic and plagal examples for phrygian mode... 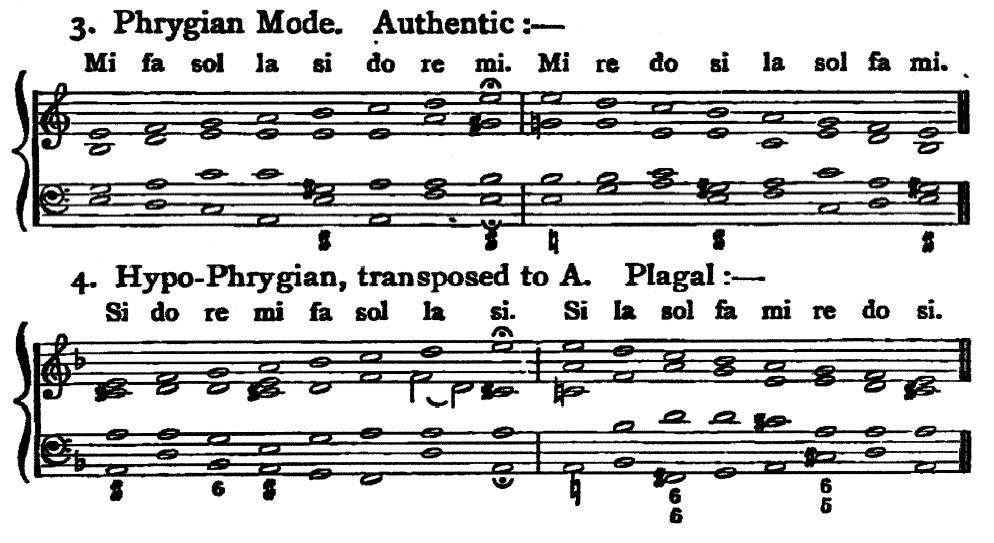 From a modern harmonic perspective those harmonization sound like playing in a minor key but treating V as the tonic.

Notice the changing major/minor aspect of the third scale degree.

Notice the ending chord gets a major third.

If subdominant, pre-dominant function, essentially means any non-dominant chord that leads to a dominant chord, and is a harmonic device to extend and elaborate a phrase, then you could say that everything preceding a modal closing provides that same extension function. In other words, just using the two examples above, any chord not the subtonic triad ♭vii(min) or iv could be this function.

If dominant is the penultimate chord of a perfect cadence, then in modal style, the penultimate harmony is one of two chords, depending on whether in authentic or plagal mode, chords ♭vii(min) or iv.

I would not call these chords "subdominant" or "dominant", at least not without some clear caveats. But I think I would draw a connection about the formal positioning of these chords in the phrase structure. Phrygian ♭vii(min) or iv go in the same place as V in the major/minor system.

True modal music is not functional harmony , if you would play modal some tips:

play the distinctive note of the mode ( 9 b for phrygian )

do not use tritone in chord ( it sounds tonal ! )

6
What is the difference between a dominant scale VS a mode?
2
Phrygian dominant scale with a major seventh
13
Why does the dominant lead to the tonic?
10
Definition of Functional Harmony
7
What do 'dominant' and 'plagal' mean in medieval music?
2
Applying schemata to chords other than I IV V
3
What are the modal characteristics of major modes?
9
What is the origin and original meaning of "tonic", "supertonic", "mediant", etc.?
1
In A natural minor what are the tonic and sub dominant family chords?