Almost all bowed string instruments have a sound post. It is said that this adds stability to the instrument and also "transmits vibrations to the bottom".

Interestingly though, guitars do not have such a thing – neither flat-top acoustic guitars nor the more violin-resembling archtop ones. So apparently a sound post isn't really necessary for a stable, well-sounding string instruments.

Yet it seems vital for violin / viola / cello / double bass. Why is this?

The crucial difference in this regard, between guitars and bowed strings, is in which direction the strings vibrate. A bow causes vibration in the plane you're moving (it moves the string by friction: the string sticks on the rosin and is "dragged along" some way; perpendicular vibrations are strongly damped by the bow-hair). Because you can't vary the bowing angle a lot, this roughly means the vibration is along the top.
A plucked string has no such restriction, it can in principle vibrate in any direction – at first in the direction you've plucked, which tends to be both down and sidewards; but afterwards the plane of vibration can move, there might even be circular oscillation. However, the transversal components often decay a bit faster, because the string can “slip” quite well on the metal frets and thus loose energy in friction, whereas vertical movement is completely prevented (unless you don't press down strong enough).

The vertical movement in the guitar is, in a way, much easier to exploit: simply put in a few supporting bars, then the entire top will vibrate coherently with the string and emit a lot of volume. With transversal movement this wouldn't work nearly as well: the top would merely “slide around”, but this doesn't excite a lot of air movement, which is one of the reasons it sounds rather poor when you try to play guitar with a bow.

String instruments take for this reason another approach. First to note, the much higher bridge. This acts as a lever. The instrument's interior is also built quite differently: we can to first approximation describe the sound post as a rigid fulcrum, whereas the bass bar supports the top but in particular also picks up the bridge's vibrations and distributes them over the top, much like the bars in a guitar. 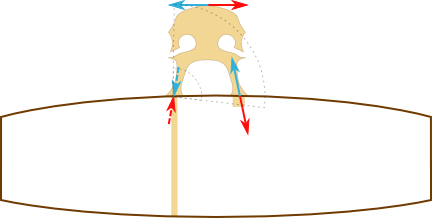 So that's the purpose of a sound post: it makes sure the body vibrates in a way that's actually useful, despite the string vibrations being in a somewhat badly suited direction.

If we look at it a bit more closely, the sound post is in fact not quite such a rigid support. It sure does transmit some energy to the bottom. But this is more of a side effect; the bottom does by design not spread sound as well as the top. Also, note that the bottom will vibrate with opposite phase (whenever the top goes down, the bottom goes up). That's really important for a full sound – it allows the instrument to “pump” the air, like a balloon inflating and deflating. If bottom and top were completely in phase, it would be just like a single sheet vibrating, which can only send out a little dipole radiation – not very efficient, in particular at low frequencies; the instrument would sound very thin.

What a sound post does not do (though some people will tell you so) is “transmit the high notes to the instrument bottom, while the low notes are amplified by the top”. You can actually turn around the strings† and it doesn't sound dramatically different, because the bridges fulcrum-action works more or less the same from both directions.

†In fact, some left-handed players use right-handed instruments with inverted strings (if they don't, like most do, just play like a right-handed person). There are a few problems with this, but the sound post isn't actually the biggest (the asymmetric finger board is rather more obstructive). In fact, a classical guitar will suffer more, sound-wise, from turning around the strings than a violin does, because in a guitar it is the vertical motion that's directly used on each side of the bridge.

Not the answer you're looking for? Browse other questions tagged string-instruments acoustics or ask your own question.

18
Why is a violin so loud compared to a guitar?
11
How to practice guitar in apartment with paper thin walls?
2
Will missing flexor digitorum superficialis keep me from playing the violin well?
9
Restringing guitar – is it safe to remove all strings at once?

13
What kind of ear protection offers the best compromise between protection and sound fidelity?
12
What purpose does adjusting the violin bow tension serve?
6
In Pythagorean tuning, what's the frequency of the tonic of each key?
20
Will a marching band on the go sound out of tune to an observer due to the Doppler Effect?
2
What is the unit for sound intensity?
3
Sound proofing a wall with rockwool. What's the best density?
12
What's the "normal" opposite of flautando?
0
Accurate understanding of the physics of sound?
0
How to calculate the expected pitch of the sound?
12
What's actually going on with the Leslie effect?