What does a double bass string eliminator do?

On some double basses, I've seen the players with this on their strings: 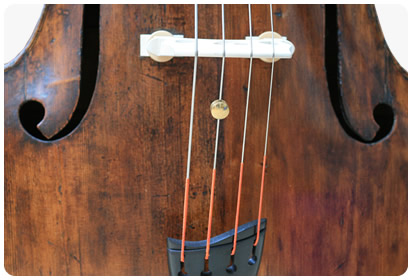 I found out that it was an eliminator.

But what does a double bass eliminator do?

Because the string is quite long between the bridge and the tailpiece, it has a life of its own. It can, and will, produce notes, often using sympathetic vibration, which are audible. Particularly when an instrument is amplified. These sounds are sometimes called 'wolf tones'. Anything which will dampen vibrations that are not wanted, as here, will be effective. The eliminator is used to stop unwanted vibrations being heard, especially when a pick up/mic is used to make the instrument heard better, as in stage work.Cheap and cheerful, less than $10 from Jazzazart. Anything would do, a sponge, etc., but it doesn't look pro.

It's called, at least in cello-land, a "wolf-eliminator." The intent is to dampen or stifle off-pitch frequencies.

Not the answer you're looking for? Browse other questions tagged double-bass or ask your own question.