Hello I am learning musical theory, I have a question about compound time signatures :

I read that for a compound time signature, like 6/8,

Let's consider a complex time signature like 7/8. There are 3 different beat divisions we could use: 2,2,3; 2,3,2 and 3,2,2. In practice there are two ways to distinguish between these different possibilities - either study the grouping of notes or see if the composer left a note on the score. The latter's very straight forward. Often modern composers will write above the stave "(2+2+3)", for example. The former requires looking at barred notes and ties and seeing where they split.

In general, the time signature itself only really tells us the number (6) and the length (8) of beats. 6/8 is assumed to mean 3+3 because we've decided it does.

Compound time is essentially made up of dotted beats. so the compound version of say 2/4 is 6/8, 1/4 is 3/8, 3/4 is 9/8 and so on... (for 2/2 it's 6/4) meaning there are n dotted beats in a bar (where n=1,2,3 and the beats are as specified by the bottom number) in other words the compound time signature will always be divisible by 3 as a dotted note contains three subnotes (i.e. a dotted crotchet will have three quavers) So 5/8 is not a compound time as far as I'm concerned. I am also an amateur, so I hope a more experienced musician will correct me if there's any mistake.

Why don't we have a type that divides into 5? Well, we could. Notational possibilities are wide open these days, and some composers delight in unusual time signatures like 7/13 and 9/6. (They usually use them to indicate tempo relationships between different sections of music, rather than any particularly complex rhythm within the bar though. Don't worry about it for now!) 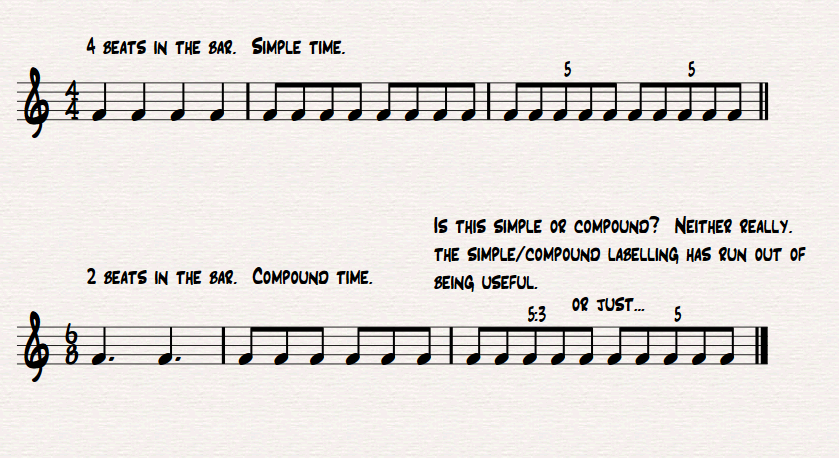 You're right. It would be possible to divide the beat into 5. One example is C-V Alkan's Etude in E op 35 no 12. This is notated in 10/16. Its tempo is given as "Andante. MM 88=crotchet [quarter] tied to semiquaver [16th]". But compound time-signatures with each beat divided into 5 or any higher prime are IME extremely rare, so mentioning only the case of division into 3 makes a reasonable simplification which covers all the music that the learner is likely to come across.