What is the difference between Overdrive and Distortion?

What's the difference? They sound vaguely similar to me and I can't tell a distinct difference sound wise. What is the difference in tone, harmonics, etc.? Are they the same? Which one is better and for what?

As an effect, distortion is any process that alters the sound in the harmonic (tone, timbre) domain.

Overdrive is a type of distortion. It is achieved by saturating (overdriving) the valves in an amplifier (or a simulation of this dynamic).

In that context, overdrive is a subset of distortion.

From a guitar effect / pedal context

So what is the difference between a distortion and an overdrive? To put it simply, an overdrive pedal aims at simulating the creamy sound of an overdriven tube amp whereas a distortion does not try to simulate reality and usually offers more gain and is more aggressive.

From the Wikipedia distortion page:

The terms "distortion", "overdrive" and "fuzz" are often used interchangeably, but they have subtle differences in meaning. Overdrive effects are the mildest of the three, producing "warm" overtones at quieter volumes and harsher distortion as gain is increased. A "distortion" effect produces approximately the same amount of distortion at any volume, and its sound alterations are much more pronounced and intense. A fuzzbox (or "fuzz box”) alters an audio signal until it is nearly a square wave and adds complex overtones by way of a frequency multiplier.

What is the difference in tone, harmonics, etc.? Are they the same? Which one is better and for what?

The difference is in the distortion amount. Overdrive generates less amount of tone change than distortion. Distortion generates more harmonics and/or the generated harmonics will have more amplitude than overdrive.

We can test this by applying both effects to a sine wave and comparing the results. For these tests, I'll use the highest amount of effect possible for each device.

These pics show the device's settings, followed by the harmonic content it induced in the sine wave. 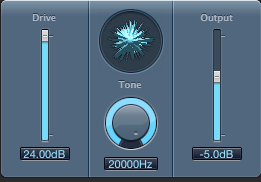 Guitar Rig's Cat (an overdrive, according to the manual):

Guitar Rig's Demon (a distortion, according to the manual):

JCPedroza's answer is pretty thorough, but I think it's actually a bit simpler.

Distortion, in general, is when the sound gets too loud for the equipment and the peaks and valleys of the waveform get clipped off.

An effect named "overdrive" simulates this, only clipping off waves that are louder than some threshold parameter. So you can play quietly and the sound isn't affected, or you can go loud and trigger it.

An effect named "distortion" applies (roughly) the same amount of clipping to all waves, so the effect is roughly the same at all volumes.

A distortion in the second sense is an augmentation of the volume associated with an hard clipping of the peaks.

A overdrive is the same but with a soft clipping.

Not the answer you're looking for? Browse other questions tagged guitar electric-guitar performing guitar-effects effects-pedal or ask your own question.

1
Overdrive, Gain and Distortion
6
Theoretical difference between amp distortion and distortion from a pedal