What is the theory behind scales?

My question is the following: Scales are The backbone of quite everything in western music. Does anybody know if there is some sort of backbone behind scales? A number, something like that? Or do some scales sound better than others because its culture-related? I have truly no idea. I can't find anything about this subject. anywhere. on. the. internet. I'm very curious.

If you're looking for a magic number upon which scales are based, take a look at 1.5, which can also be expressed as a ratio of 3:2 (the same as multiplying by three and dividing by two). That's the ratio of an interval called a pure fifth. It's also called a just fifth; the terms are interchangeable. (They are not necessarily the same as a perfect fifth, however. And if you're wondering why they're called fifths at all, don't get hung up on that just yet. Hopefully, it will be clear later. If you already know what a fifth is, my apologies; I don't mean to insult you.)

If you start with a note of a particular frequency and multiply its frequency by 1.5, you've found a higher note which sounds consonant with the first. (Consonance is the opposite of dissonance.) If you graph the waves of these two notes, you'll find they meet up on a regular basis. In the image below, the lower blue note completes two wavelengths while the higher red note completes three. There's your 3:2 ratio. The waves cross zero together at every 1.5 wavelengths of the higher note. 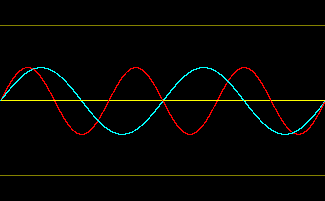 This regular meeting of the waves is what gives them consonance. The simpler the ratio, the more consonant the interval. There are two intervals which are more consonant than a fifth: unisons and octaves. Their ratios are 1:1 and 2:1 respectively. One may wonder if a stack of fifths and a stack of octaves ever line up and meet at a particular frequency. (Unisons, while very consonant, won't get you far.) Spoiler alert: no, they will never line up, at least not the way you might wish they would.

But let's see what happens if you try. If you start with a frequency, find its pure fifth, take the pure fifth of that fifth, and so on until you've done it 12 times, you end up at a frequency which is just over 7 octaves. If you say, "close enough" and adjust the interim notes by repeatedly halving their frequencies until they all fall into a range of one octave, you've got the 12-note chromatic scale you know and love. This is shown in the chart below. I believe this answers your question and tells you why an octave is divided into twelve notes. (You asked the latter in a follow-up comment to another answer which was deleted.) 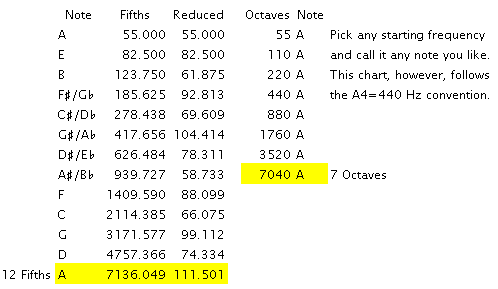 Supplementary information regarding the chart

The difference between 7 octaves and 12 fifths, the one you could say was close enough, is called the Pythagorean comma. We often fudge this difference and take some portion away from each fifth so that 12 fifths line up perfectly with 7 octaves. So perfect fifths are always less than or equal to the just/pure fifths which are shown on the chart, but your ear generally accepts that they are slightly off. (You're much more sensitive to octaves being off.)

Note that the Pythagorean comma is not a specific number of Hertz, but a ratio. It's 12 fifths to 7 octaves:

The various schemes we use to fudge the fifths are called temperaments. Today, we use a temperament called Equal Temperament, which takes the same amount away from each fifth. Not all temperaments do. In fact, what we call Pythagorean tuning doesn't adjust anything at all. The tradeoff is that some intervals sound positively awful because the Pythagorean comma must be accounted for somewhere. These intervals are called wolf tones. Each progressive key becomes more and more off, so you are limited in what you can do with modulation.

Let's say we decided to build a scale from the first 7 notes derived by stacking fifths. (To avoid accidentals, I will begin with F, but it works no matter where you start.) When we chain fifths from F to C, C to G, G to D, D to A, A to E, and E to B and we reduce them to the same octave, we find that, regardless of the starting note, they line up in an alphabetical order which wraps around. Instead of F C G D A E B, they could line up as C D E F G A B. Notice that the G (in this example) lines up into the fifth spot of a scale that starts with C. The choice of C as the scale's starting note gives us the major scale, but this choice is essentially arbitrary. If we left F as the starting note (F G A B C D E), we'd get the Lydian mode. Pick A (A B C D E F G) and we'd get the Aeolean mode, which is the same as natural minor. In every case but one, the fifth scale degree is the perfect fifth of the starting note. That is, of course, why fifths are called fifths. (The exception occurs when we begin with B, which gives us the Locrian mode. The fifth is still a fifth, but it's a diminished fifth instead of a perfect fifth. That is because, when we stacked fifths, we stopped short of including B's perfect fifth, F♯.)

Now, you could say all of this is arbitrary and yes, culture has trained our ears to hear the major scale as "normal" and anything else as more exotic to some extent. But it does have its basis in physical phenomena.

Everything in trw's answer is true, and the next to last paragraph really does answer the question. (Finally!!!) But I would like to add a bit more historical perspective to why the seven note scale came to be so important.

Almost all primitive cultures have at most a pentatonic (five tone) scale. I'm sure if you go back far enough in the Western Tradition (that is, European), you'll find they were into pentatonic scales as well.

But musicians, especially performers, are very aware of 'gaps' in things. For example, there's a 'gap' in a so-called perfect fifth, that keeps it from having a 'flavor.' That is, it's neither major nor minor. If you're a primitive musician and all your bone flute can do is octaves and fifths, you notice this gap and so you invent the pentatonic scale, which provides the missing interval of a third, thereby determining major or minor. (Note that the smallest interval in the pentatonic scale is what we call the whole step.) But that new pentatonic scale also has gaps. There's an obvious gap after the first three notes, and another one between the last note and the octave. So you invent the half-step, and now suddenly you have modes, including the two that will eventually become known as Major and Minor. Thus one aspect to the importance of scales in this culture is the insatiable curiosity of the musician, who wants to know 'what else' there is beyond what is given.

46
Why does the scale have seven (or five) notes? Why not six?
48
The major scale - why and how?
17
From the piano tuner's viewpoint, what needs to be done in order to achieve “equal temperament”?
12
What is a perfect fifth?
-2
How exactly the exact symbols (C C# D D# E F F# G G# A A# B) of 12 tone equal temperament with octave (2x) and perfect fifth (3/2) found?
2
Do Half steps in a diatonic scales need to be separated by two whole steps?

11
Music Cognition-Are people who play just by ear and intuition good in music cognition by natural talent?
4
Book about development of music
5
When learning scales, is it important to know which key is being pressed when?
4
Scales, Theory and memorization
14
The theory behind western pentatonic scales
33
I'm learning music theory, but none of the songs I'm trying it on are playing by the rules
3
Why harmonize non-diatonic notes with major 3rds above, in a “minor key” context?