I'm transcribing a book of 18th Century music and have come across several instances of the notation shown in the image. A few fellow musicians I've asked, and the online Dolmetsch guide to musical symbols, all draw a blank.

It's from a book of dance tunes 'for the violin or the German flute', and the marking is definitely printed in the original, e.g. not written in later by hand by the book's owner. 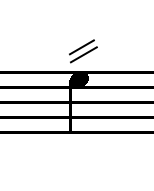 Edit: The image doesn't seem to be showing up for me at least. The symbol is directly above the note and looks like an equals = sign, only tilted at about 30 degrees (right end higher than left end). It's definitely a double line, not a tenuto.

Edit: Thanks for thoughts so far. Here's an image of the context. Note that a few bars later there's a tr trill marking!

I believe the symbol is an Italian notation, referred to as 'Mordente' - although not always the mordent as we know it! It was commonly used 1710-1760, which fits the time period you specified.

How to play it seems to vary according to who wrote it, but one of the most 'defined' examples was from Geminiani's 1748/51 ornament tables, where it was specified like this:

So here, essentially a downwards trill.

The source states that various composers also used this to denote a standard trill - however, given the tr markings also on the music, I'd suggest this example was to be played as above. (Although perhaps you might be able to provide more insight, knowing the composer of your music!)

Apparantly, there are also various variations!

Having looked through all my resources, and failed to find it, I'd hazard a guess that it's a tremolo sign, with the note being bowed rapidly back and forth.Although that's not easy on a flute ! It actually shows up in a similar manner, but with the marks on the stem, as tremolo, for violin.

Could also be a 'ceasura' - a brief silent pause, where timing isn't counted. But surely that wouldn't be over a crotchet, or any other note.

I might have it: in Finale music notation software, they include this symbol. According to the manual its a caesura. Don't know if it fits with the context, but that's the closest I could find.