PA System: What type of speaker for that "punchy" bass?

I got two JBL MR918 subwoofers and two Behringer EUROLIVE B215XL. My system does well, but when playing electronic music with a bass that would sound very punchy and you would feel it in the chest when listening to it at a festival, it doesn't.

What else do I need to get this feeling?

Well first, the amount of power inherent in the average festival rig or even an installed club system will dwarf what you can get out of any four speakers on the planet. That chest-thumping kick drum that's a mainstay of EDM is produced by moving a lot of air very quickly, creating a shockwave you can feel. That requires a lot of big cones, in turn requiring a lot of wattage to properly drive those cones. The larger outdoor shows can have total system power ratings in the hundreds of thousands of watts, distributed through dozens of speakers.

The system also needs to be properly tuned and timed. Virtually all installed PA systems use multiple speaker cabinets, located in multiple places. The difference in distance and off-axis angle between any two speaker cabinets and a particular point in space within the venue will cause sound waves from those speakers to arrive at different times and at different relative levels, causing a certain amount of phase interaction and echo. While it is practically impossible to eliminate this behavior across the entire frequency spectrum from 20-20,000Hz, at every point in space within the venue, there are techniques to mitigate these interactions by properly selecting, placing, aiming and timing each speaker in the system. Proper application of these techniques and others are the bread and butter of acoustic engineers who design sound systems (and entire performance spaces) to minimize harmful interactions.

You also want speakers of different sizes. 15-inch and 18-inch speakers are big and powerful, with a lower reach into sub-bass frequencies, but they're also massive, so they require that much more power to move the cone itself in order to drive the column of air in front of the cone. That typically reduces their response in higher bass and midrange frequencies, which helps form the definition of the leading edge of that kick drum.

Bass guitarists, especially those playing in newer genres where the nuances of tone in the bass guitar is important, often choose cabinets with more smaller speaker cones, allowing them to get as much or more air movement (2 10" speakers have a combined area only slightly less than one 15" speaker, and a cabinet the same size can hold 4 10s vs only one 15) while putting less power through each speaker coil, thus decreasing various losses inherent in trying to put equivalent power through just one coil. The net result, according to many, is a "punchier" sound when using 10s or 12s versus trying to do it all with 15s. Now, the speaker arrangements used for bass guitar amplifiers aren't often seen in PA setups, but the same tricks can be employed. Consider investing in 3-way PA towers with a mid-woofer; this middle speaker will help the larger woofer by covering more of the midrange frequencies that define tone, leaving the bigger cone to handle the lowest fundamentals that generate the thump you feel.

Key factors (hometheatershack.com) are your woofers' combined surface area; their displacement, achievable low Hz factors and an amplifier capable of delivering the power needs of the speaker configuration.

You simply cannot expect this, 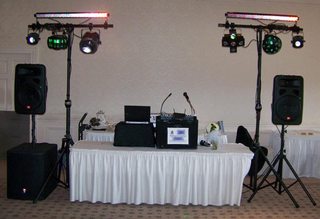 to do what this does, 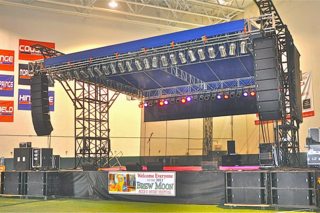 Behind the bar at the club, you might find racks full of amps like this one, and that's just for indoors. 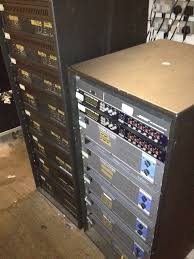 If we have to go outside, go big or go home. The difficulties encountered with reproducing sound outdoors can only be solved with lots of money. If you expect it to preform like your local club, an indoor setup will, too. Any speaker is the correct one, you may just need twelve of (each of) them... or more, and enough amp(s) to handle it. 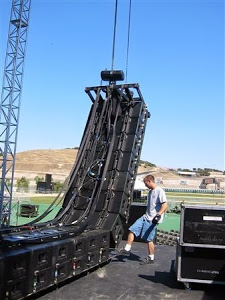 You low end sound involves much more than just your speakers! Your amp and your bass and how you set them up and adjust them are critical; your strings; your right hand (in particular) technique; It's a long list. A good musician can get good sound out of equipment that might not be so great - a poor one will still sound poor, no matter what the gear.

Certainly what the other answers have mentioned is correct - you cannot expect a small scale system to generate the sound you'll hear at a music festival. But It is possible to generate some pretty good "punch" with the right bass, strings and amp combined with proper technique even without huge speakers and high wattage. It's all relative of course - but speakers are only one factor (the final one) in a long chain of factors that go into producing your sound, which starts with your fingers.

Not the answer you're looking for? Browse other questions tagged speakers frequency pa or ask your own question.

6
How to monitor a song with a low budget
3
Extra speaker for combo amp?
2
What are my options to incorporate a sub-woofer into a PA system for live music performance?
8
Why do guitar amps only use one type of speaker cone?
4
What is the difference between the speaker in a bass amp and sub?
2
Is it possible to oversize a sound system for a given space?
2
Under what arithmetic conditions do collections of vibrations sound "nice"