Edge Zero II tremolo not parallel to the guitar body

I just bought an Ibanez S520 guitar online which has been fitted with a Edge Zero II tremolo which resembles the Floyd Rose Type tremolo .

I just want to know if it's okay to keep the tremolo bridge not parallel to the guitar body or should I contact a technician to fix it if there's any problem with the guitar ?

It does sound like your guitar isn't set up correctly, as the tremolo should be parallel with no buzz. The main problem I see is not so much with the tremolo, but with the fret buzz, though. This leaves you with some options.

Leave the bridge non-parallel:
The first option would be to leave the bridge in a non-parallel position to avoid fret buzz. This is not recommended by Ibanez, though, as tuning stability may suffer. There may also be other downsides like reduced comfort when palm muting amongst others.
I myself would hate to cater to a messed up setup, too, but that might just be me.

Raise the action:
The second option would be to set up the tremolo to be parallel to the body and raise the action (instructions are given in the link above). Raising the action may get rid of the fret buzz, but most players prefer a low action, so that might not be for you.

Adjust the truss rod:
Most fret buzz can be dealt with by adjusting the truss rod, therefore changin neck relief. This is a bit complicated and best left to a professional, though you could do it on your own if you take your time and do some thorough research on the topic.

So what now?: If you have the monay, I'd go for a professional setup.
If you don't have the money, you can always just raise the action and see how that feels. If that's not for you, it might be time to get to know your guitar a bit better (read: Hours of adjusting, tinkering etc.). Though this might be a very frustrating experience at first, it can also be very rewarding if you're a gear-nut like me :p

Here is the answer I found out at my own cost, at least this is the only way I could properly set up low action. The key was the angle of the bridge! I've been having issues with the EZ II since I purchased my Jem, and I even thought about reselling it as I suspected problems with the neck. No matter how I adjusted the truss rod, I always had fret buzz either on the low or on the high end, so I had to compensate by lifting the bridge. I was very surprised, because I also own a Jackson - quite a cheap guitar in comparison - on which I never had problems with setting up low action, even without ever adjusting the truss rod. Then it came to my mind that since the frets are curved, the bridge must also provide some curvature through the strings, meaning that the two E's are slightly lower than the G and the D strings. This difference is hardly noticeable with the naked eye, at least not by just looking at the bridge. But this is exactly why these bridges are designed in a way that there is no 100% accurate angle setting on it that suits all neck dimensions! This seems like a clever design feature, and you have to adjust your bridge angle in a way that suits your neck. And this angle may be different on an RG, compared to let's say an S or a Jem.

I have found two types of explanations on the web and also on youtube, one stating that the top of the bridge must be parallel with the body, the other stating that the bottom of the bridge should be parallel. In my case neither was true. By adjusting the spring tensions I tried both configurations, but none was satisfying. For a while I had the top parallel, then I switched to the bottom being parallel, but still could not set up low action properly. So I strengthened the springs again just a little, like 3 quarter turns with a screwdriver, then re-tuned the whole guitar.

Now my bridge angle is exactly between the two mentioned extremes, neither the top, nor the bottom is parallel with the body.

So to summarize it: by adjusting the bridge angle you are effectively changing the string heights relative to each other, sharing a horizontal curvature provided by the nut positions (set up for correct intonation) and a vertical curvature provided by the nut heights. This angle should be set in a way so that the string heights perfectly match your neck's radius. Your only option is making small adjustments to the bridge angle, and check how it affects low action and fret buzz, but beware: the more the bridge is angled towards the body, the more your string heights will follow the horizontal locations of the nuts.

I am not sure how much is visible on this photo but I am adding it anyway: 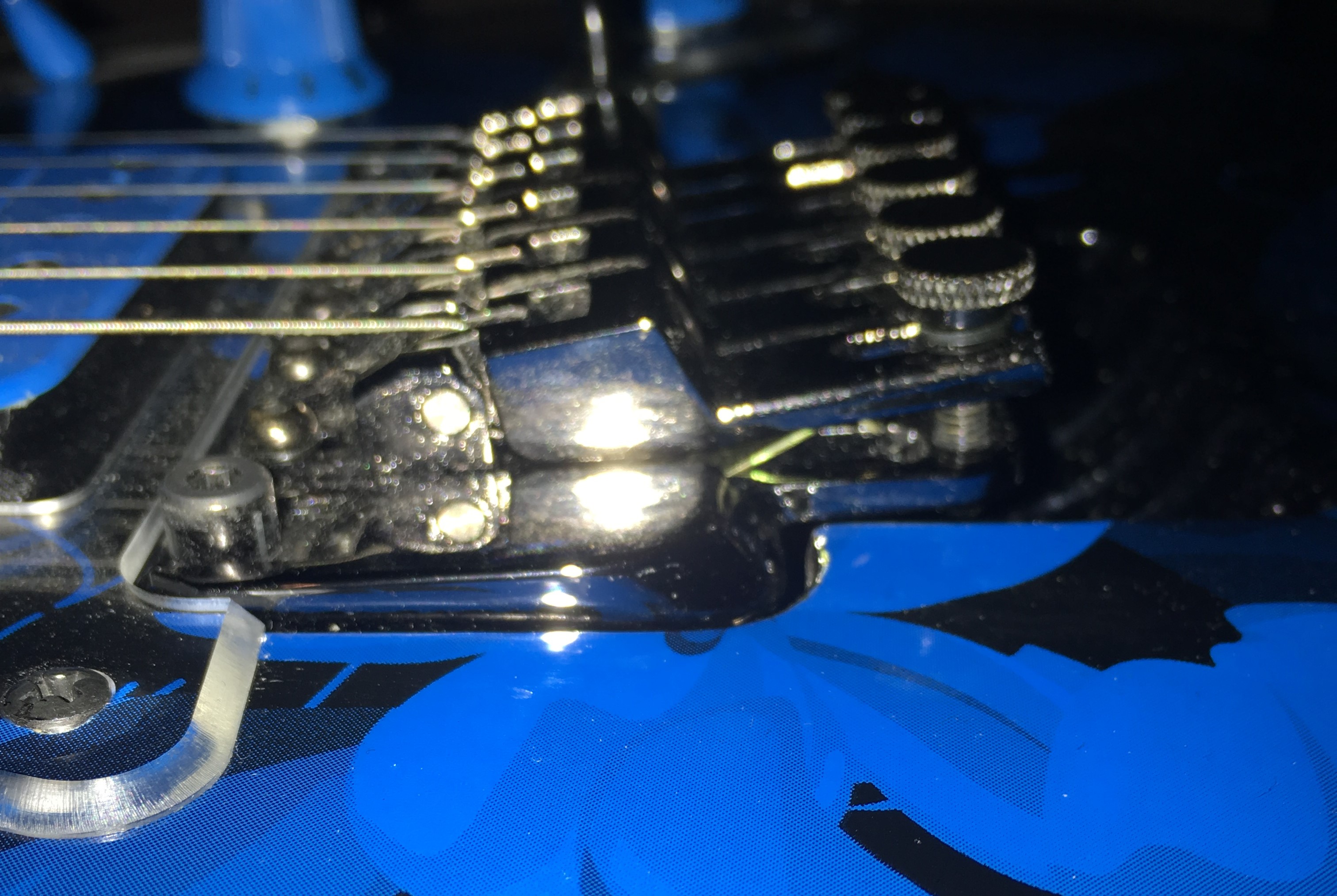 You can even see it on this photo that the nuts towards the middle are slightly higher. But if the whole bridge is angled towards the body this vertical height pre-set is ruined by the horizontal intonation adjustment position, so your strings will have incorrect heights relative to each other.

So here is a very brief summary: the angle should be anything between slightly angled towards the body to completely parallel with the body, you have to find it out yourself which will match your neck radius better.

Edit: After further experimenting I've finally ended up with a bridge angle where the top is almost parallel with the body, because this allowed me to further lower the action without any fret buzz. Now the strings are as low as on my Jackson. Again, don't forget that this is a Jem, which may have different neck radius compared to an S.

The answer and reason for parallel is equilibrium. Parellel is the optimum position because it has the least amount of strain and wants to go back to this position each and every time. This is what will help your guitar stay in tune. String length (intonation), saddle height, neck relief, all play an important role in your guitar performance. Any tech will tell you that... if not find another tech.

The main question is whether your guitar sounds in tune when playing higher frets. It's been my experience that the thicker strings call for slightly more string length in order to be reasonably in pitch with the thinner strings on high frets. This effect will be less pronounced with guitars having a flatter action since the difference in string length likely compensates for the effecton the pitch of the additional tension caused by pushing the string down to the fret.

So never mind "parallel". The main criterion should be "in tune on high frets". If that is the case, messing with the bridge will not make things better.

Not the answer you're looking for? Browse other questions tagged electric-guitar tremolo-system tremolo or ask your own question.

4
Where can I buy knife-edges for a guitar tremolo bridge?