Minor scale with 7th chords, 7th not raised on 1 and 3

In my music theory class, the text book has in an example, all of the 7th chords in a G harmonic minor scale. Why, in the chords on 1 and 3, is the 7th is lowered? While the chords on the 5 and 7 are raised, making it clear that it is a harmonic scale. 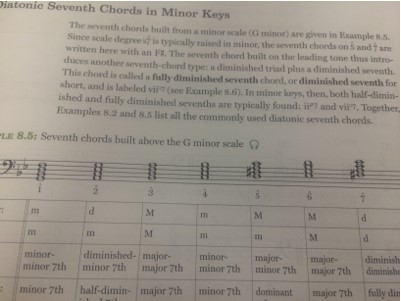 These are not the seventh chords of G harmonic minor, but just one possible collection of seventh chords in G minor. As you've noticed, only the V and the VII chord are from harmonic minor. The reason is that these chords (usually) have a dominant function where the leading tone (F#) plays an important role. The other chords are based on the natural minor scale, which is more commonly used for the chords on I and III, because this results in the less exotic sounds of a Im7 and a IIImaj7 chord, instead of a Im/maj7 and a IIImaj7/#5. Note that these latter chords are also used but they are much less common. So the chords listed in your text book are simply the most common chords in a minor key, some of them taken from the natural minor scale, some (the ones with a dominant function) from the harmonic minor scale.

What you need to understand is the role of the Dominant chord. This chord is the V degree of your scale (and can also be substituted by the VII) and it

has the role of creating instability that requires the tonic for resolution.

So, you see, point of a dominant chord is to lead the chord progression to the first degree of you tonality (in your case G minor).

To make it even more simple: In a chord progression, after you play V (or VII), most likely, the next chord will be I. (this being the point of the dominant chords). Thus, you need the leading tone to make it clear to the ear of the listener.

The rest of the chords (II,III,IV,VI) don't necessarily preceed I, so there is no point to include the leading tone.

Melodically strong affinity for and leads to tonic.

Of course, there are exceptions for all the -rules- I mentioned above; I just tried to mention the really basic stuff, so you can understand it.

The title of that part says 'G minor scale'.No mention of harmonic. There are different minor scales: natural, harmonic, classical melodic and jazz melodic. All have the same first five notes, rising, but it all changes after that. From the 5th (D) Eb, E, F and F# are available from the different minors. So there will be several different incarnations of chords spelled from those notes on top of others from G minor.

4
Why does the minor scale have modes?
4
Chord construction using the minor scale
13
Why do we only build 7th chords on the supertonic and dominant of a major scale?
7
Why diatonic chords and not always major, always minor, etc?
2
V7 and the minor scale
2
Constructing “add” (and other extended) chords confusion