Cheap keyboards seems to have the keys hinged with springs, or some form of elastic element. Contrary to real pianos, or high end digital pianos, that seem to have a counter-weight on the other extreme of the keys. How are these types of keys called? What difference does it make when it comes down to play better or to play certain pieces? Is there something that can't be played with the cheap version? What type of piano should a beginner choose? It's ok to start with the cheap keyboards and then move to the others? This question is not about how the keyboards sound, just about the mechanics of the keys.

Besides weighted action, they can be as well called "hammers", because actually, there is a hammer inside of some of them, for example in this GH3 (image taken from yamaha.jp webpages): 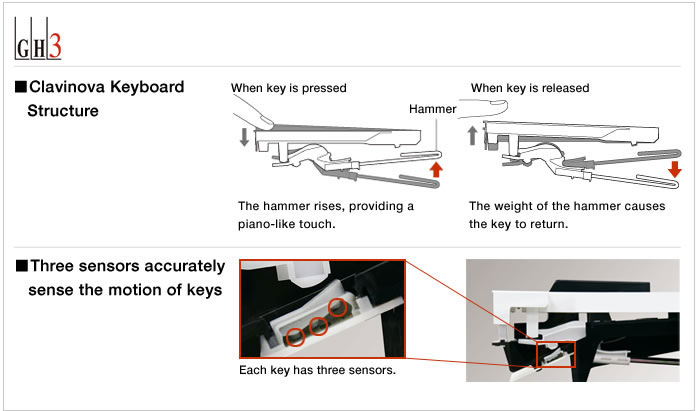 GH3 stands for Graded Hammer 3rd generation. The word graded indicates that the keys change a bit from low tones to high ones, which reflects the behaviour of a true piano: the left-side side keys are heavier to play than the right-side ones.

Having graded keybed is in some sense a bonus and it's not necessary for developing proper piano techniques. However, weighted or hammer keybed is a must-have if you want to develop the proper technique, as Tim mentioned.

Besides the problems he lists, I would add another one: it is usually quite hard to play between the black keys, which you need when the piece contains a lot of accidentals. This makes one of the big differences between an organ keybed and a cheap keyboard one.

4.If one just wants to find the way around the black and white keys, anything is fine. If one wants to eventually play proper pianos, then developing a feel for weighted keys makes sense. If you're considering one against the other, take someone who knows to the shop, or ask the people there for an explanation which will make more sense there than reading about it.

Not the answer you're looking for? Browse other questions tagged keyboard beginner or ask your own question.

50
What to look for when buying a digital piano for a beginner?
2
How useful are learning aids in teaching oneself piano?
4
How reliable are keyboards and electric pianos?
3
How to use a 61-keys digital piano?
21
What are the practical advantages of keyboards with non-weighted keys vs. weighted hammer action?
4
Purchasing a keyboard piano for recreational play
3
The proper technique involved when playing above and below a basic scale C to C and hand independence
3
MIDI keyboard action for harpsichord practice
6
Key down weight for digital piano