Ask Question
Asked 7 years, 9 months ago
Modified 6 years, 3 months ago
Viewed 38k times
3
votes
Locked. This question and its answers are locked because the question is off-topic but has historical significance. It is not currently accepting new answers or interactions. 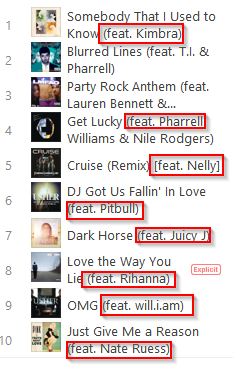 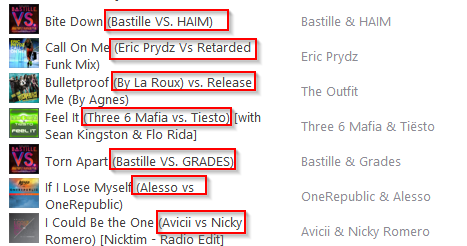 Feat: means 'featuring', its when some artist appear on another's song providing some of the music or vocals.(one has the song, the other is a guest)

&: means a collaboration between the two artists to produce a song by both(like equals and not a guest)

Vs: means 'versus', is mostly used when mashing up or mixing two songs together, or when a studio has two artists work on heir own parts but into a single song(this is in a competitive manner)

x: could have the same meaning as 'vs' but maybe as '&', it is not widely used so am not sure how they define it.