theory analysis roman-numerals
Share
Improve this question
edited May 30 '15 at 23:30 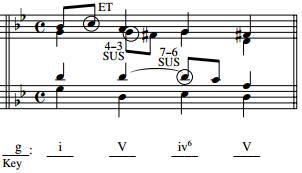 4
How writing a dominant 7 sus4 chord in RNA ( Vsus7 chord in the 1st inversion)
3
How would you write an inversion of a suspended chord with functional chord symbols?
0
How is Vsus7 written in Roman numbers if 1st inversion? (any seventh chord with sus4)
3
Chord progression, how to add the bass properly
0
Roman numeral analysis of chord with non-chord tone in bass