How to make a bass growl?

There’s a bass tone I really like, that doesn’t quite sound distorted, but instead is sort of a subtle, warm growling noise. I think this might be what guitarists mean when they talk about “crunch.” What’s a good way to get that sound out of a bass? Amp settings, effects pedals, something else?

For example, Jimi Hendrix’s “Fire” has a lot of growl, and Nikki Monninger usually puts some growl into her riff-driven basslines for Silversun Pickups, like the “Panic Switch” riff underneath the fuzz guitar. I can hear the growl occasionally in synth bass too, like in some dubsteb. Sometimes it’s a bit like gentle fuzz bass, but my favorite growls sound more like the noise you get from squeezing a rubber balloon.

Well, this is certainly a kind of distortion, but not the kind you get with a fuzz pedal. Fuzz and distortion pedals are characterised by sharp transistor clipping.

Rather, the kind of distortion that you hear on old, loud records such as fire comes usually from tube amps that weren't originally meant to sound much distorted at all, but were just taken to their limits. When tubes go into saturation, they produce much “softer”, subtler clipping, and retain more of the dynamic content (while still compressing the peak range quite a lot – so you can simply get the the bass louder in the mix than possible without compression).

That's not all, though. If you play a dull jazz bass with flatwound strings through a fully-blown Ampeg head, the result won't be so much growl as flatulence. IMO, for a real good growl, you need quite a powerful midrange even in the clean bass signal. I.e. relatively bright strings and powerful playing, so the strings rattle a bit on the fretboard. That also gives some serious treble content, which will otherwise get rather lost in the flood of low-midrange from the overdrive.

(It also helps with a particular problem: inharmonicity, which is by nature strong in thick bass strings. With a clean amp, this merely adds a particular character which isn't necessarily bad, but if you later distort it, in particular on soft amp distortion, then the string's harmonics aren't quite in line with the artificial harmonics from distortion. That makes the sound pretty muddy. But when the strings rattle on the fretboard, this surpresses inharmonicity in a way similar to how a violin bow does.)

The downside to such a “power-pluck” sound in itself is that it's pretty transient-heavy without a whole lot of tone, and without “enduring strength”. That can work out ok for a funky slap bass in a large band context, but in a small rock band you'll typically want a bit more body, and that's precisely what the tube overdrive offers. It can also be achieved with compressors, but those don't add the extra growl!

As already mentioned, the fingerboard rattling works out differently and, in a sense, more effective on fretless instruments, in particular standup bass. Without frets, you get not such a short, snappy clash when taking the string's space to its limit, but a more levelled crunch – in essence a lower-pitched version of what goes on in a sitar bridge. Depending on the action, this will then work out to the characteristic fretless “mwah”, or something quite similar to tube-OD growl. Indeed, the growliest bass sound I know is the one I get from my fretless acoustic bass guitar (bright piëzo pickup, absurdly heavy strings, lots of force required to get decent direct sound), when I then also route it through a tube amp. I used it in this song.

I think the best definition of a bass growl is

A strong fundamental combined with a strong midrange overtone.

Bass growl is typically found in acoustic standup basses which have wound strings. A strong pluck (pizzicato) will cause the wound strings to rattle against the fingerboard, causing the growl. The wound strings seem to be essential for this tone unless you modify the signal with a pedal.

I used to own a fretted Steinberger bass that growled with wound strings. I would set the EQ for a strong bass but raise the mids to get the growl. 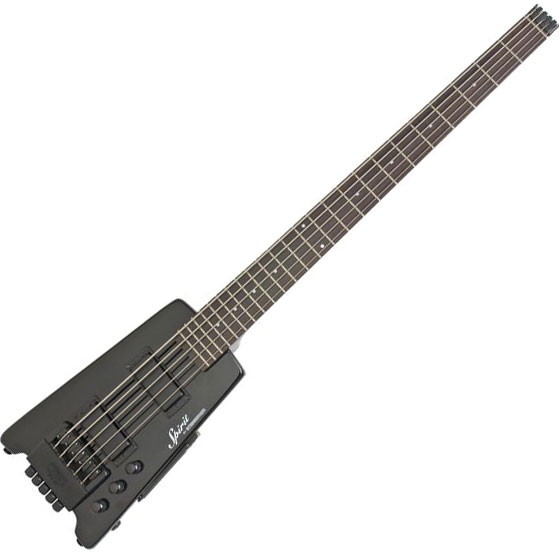 Without having a proper clip to listen to, I would guess that it is either a overdriven amp or an effects pedal creating that.

In a band situation I always found that a fully overdriven bass was too overpowering to be used other than for solos or other distinctive parts (such as the opening from All Around The World by Red Hot Chili Peppers), however occasionally I would want to suggest a more distorted sound. To do that I'd take my fuzz pedal and roll off the gain significantly, whilst also leaning towards my basses tone as opposed to the fuzzed signal. That way you get some buzz on the notes which helps sustain but blends well with the rest of the piece.

Alot of the time in metal and rock the bass isn't particularly clean, but it's usually just pushing the amp somewhere near the overdrive limit without being too over the top.

Equally I think from the right settings on my Fender Jazz, and by pushing the gain on my amp so that I get a small amount of overdrive but maintain alot of the original signal, I could get something similar. Tending toward the bridge pickup makes the Jazz a bit growly anyway, and by subtle effects or amp settings it might be what you are looking for, so it could even just be the bass setttings. My old BTB676 had some pretty nice settings for that with an active EQ.

If you have an example in mind I could probably be more precise, and I can get back to you if something is posted.

The sound you are referring to could be from a fretless bass. Fretless basses are known for their "growl" - the sound of the string being pressed directly onto the wood (as opposed to a fret) and being plucked. Jaco Pastorius was one of the first pioneer's of the electric fretless bass and is definitely someone to check out. Here is his song the Chicken:

I am not sure Jaco was a big user of effects pedals so you can be sure that a lot of his tone comes from his touch and his instrument. Unfortunately, if you mean to replicate this on a fretted bass you will have some difficulty getting it to be exactly the same. My recommendation would be to start with a flat EQ on your amp with a little extra gain. Then adjust your EQ to taste to match the tone you are hearing.

Not the answer you're looking for? Browse other questions tagged guitar-effects electric-bass-guitar distortion or ask your own question.

13
What is the technical term for Bass 'growl' or 'roar'?
6
Bass sound in Ride the Lightning
3
How to achieve Jaco Pastorius' percussive effect
3
Do I need an effects loop in a bass amp?
17
Basic effects for bass
2
How is the "fuzzy" effect in Funk bass achieved?
7
How do bass effects differ from guitar effects?
1
How do you play bass guitar with headphones?
6
How Do I Make an Electric Upright Bass Sound More Standard?