I've found that when playing the last four bars of the 12 bar blues (V IV I I) with triads (in a typical 70s rock fashion) that inserting a major triad on the flatted third sounds really good as a kind of a fill (playing it for one beat, is that the right word for it?).

I wonder why is that? Both flatted third and flatted seventh are blue notes, but my guess is that that's not why it's good, but because it toys with switching to the minor scale. I've found that it sounds a bit more tense if I then use Isus4 as a fill in the last bar, because it puts emphasis on the third degree of the scale in I, which supports my theory.

My questions:
1. How is this use of the major triad on the flatted third degree called? What is the Roman numeral notation for it?
2. Where do I learn more about this kind of tricks?

You were right on when you said that this chord "toys with switching to the minor scale." In classical musical analysis, the major chord built on the flattened third is considered a "borrowed chord", a chord that is borrowed from the minor version of the key. In Roman numberal analysis, it is written exactly as you would expect: ♭III.

Like many other things in music, there can be multiple interpretations for why this sounds "good" in this context. I think, as you pointed out, the fact that this chord contains all blue notes is one reason why this particular borrowed chord seems to fit so well. It can also serve as a passing chord: I don't know if you've used it in this way, but one really intuitive function for a ♭III is leading into V, as the ♭3 scale degree pulls down to 2, and the ♭7 pulls up to 7.

Here is a chart (courtesy of Wikipedia) that show some of the common classical borrowed chords for C major:

You'll notice that all of the other chords in this list rely on the flatted 6th scale degree, which is not a "blue note", so these chords will probably sound a little less closely related to your key than ♭III; however, you may want to experiment and see if any of them give you the sound you like. Another borrowed chord you may want to experiement with is the ♭VII, the major chord built off of the flattened 7th scale degree (B♭ in C Major.)

Adding to @Casey Rule's answer: the set of chords that generally works with a key are (in C) C, Dm, Em, F, G, Am and Bo, with their 7ths if appropriate. There is also, in theory, the set of chords from the 'parallel' minor.In this case, Cm - (relative major being Eb). This gives the chords from Eb major - Eb, Fm, Gm, Ab, Bb, Cm and Do.There's now a far wider choice of chords that will 'work' in C.The blue notes of (in C) Eb and Bb are included in the second set.Even the flat 5 blue note appears if one uses Ab7.Actually, including these extras doesn't leave out much from the whole chromatic scale! So the old adage 'if it sounds good, it probably is' still rules!

Adding an ♭III on top of a I will give you the same notes as (albeit spelled differently from, and, i.m.h.o. more correctly than) the "Hendrix chord", or, more officially, the Dominant seventh sharp ninth chord, a chord that is used a lot by rock guitarists.

Because it has both a minor and a major third, it sounds very "bluesy", although it can be traced back a long time (but then only as a passing 'clash', like the middle of bar 7 of the Andante in Mozarts sinfonia concertante for violin and viola, which contains an F chord on top of an (inverted) D chord, hence an F♯ and F♮ at the same time): 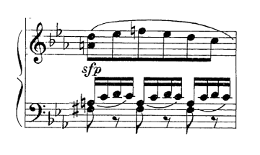 Not the answer you're looking for? Browse other questions tagged harmony chord-progressions rock or ask your own question.

1
Bass chord progressions in “Killing me softly”
3
What's the theory behind switching modes during a passage?
5
How do I rationalize this interesting chord in Mozart K. 331?
5
Chord sequences for 12 bar blues
1
Looking for some harmonic justification of chord progression: F G Bbm --> F?
4
Why does VII have dominant function in natural minor
1
Understand this progression/harmony
6
Is Locrian a minor mode or is it a diminished mode?
4
Compelling Use of Non-diatonic Chords in Rolling Stones
1
Augmented triad in Pathetique Sonata? How does it function?