Did they ever make a double bass this huge?

I have seen some pictures where the double bass is literally enormous. Seems like a single person wouldn't be an able to play it on his own.

But I don't know for sure if these pictures are real or not.

So, was there ever a time where the double bass was enormous? (or maybe a similar instrument that was really really big)

I found the pic on a Facebook page, called Discover Double Bass (link) and here is the bass: 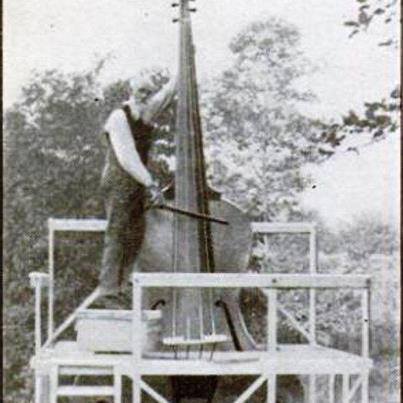 And another two similar pictures from Google: 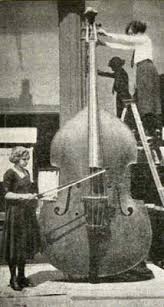 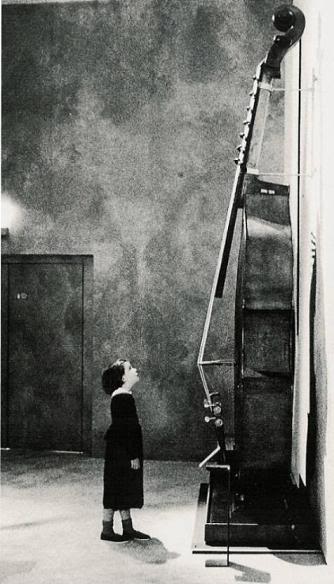 As far as I can find, it was likely just a really big double bass!

Whilst it may appear somewhat equivalent to the octobass - it is different to the maintained examples in the Musée de la Musique and Musical Instrument Museum in that:

b) Octobass's appear to normally have a extension mechanism for the 'fingerings', to allow the instrument to be bowed, and 'fingered' by the same person.

This page details a number of giant double basses which have been built, and states that the octobasse is an entirely separate, standardised instrument, invented by Jean-Baptiste Vuillaume in 1850. "The reason [the octobasse] has survived and is still used is because composers as Berlioz, Mahler, Wagner, Strauss, Brahms and Tchaikovsky have all written pieces utilizing it."

I've tracked down the original source of the first image, it was featured in the April 1935 issue of Popular Science. The relevant 'cutting' is below: 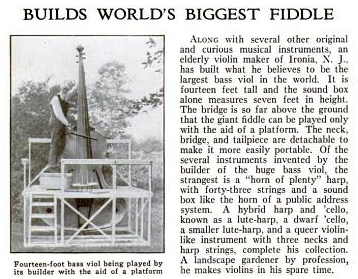 The magazine (and possibly the maker?) refer to the instrument as a 'bass viol' here.

Another example was featured in Strad Magazine in 1925: 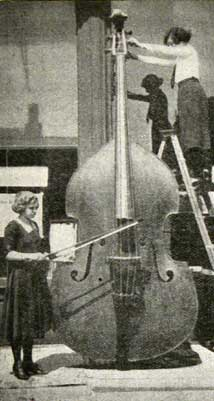 This example was 11 2/3 feet tall, which seems similar to the one in your image. It was exhibited at an unnamed musical convention in the US, and later shown in the window of Carl Fischer, of Cooper Square, NY.

The article also mentions a "giant bass played on by Mr. Boyce at the Westminster Abbey Festival in 1791". The source of that one:

This instrument had been made to his order, and was suggested to [Fischer] by seeing and trying a huge bass made by a man of the name of Martin, who kept a public-house in Leicestershire, and who appears to have made the construction of musical instruments his hobby.

I wonder if it survived.

The article states that there have been no uses of a giant double bass in orchestal pieces 'of recent times' - it suggests this is because of the rarity of the instrument, and that fact that effects in the range can be covered by a 32-stop organ - which I guess are much more common.

So regarding the question, no - I don't believe the double bass was ever commonly this size, or that this is a photo of anything else with a different name. It appears that a couple of instruments of this size have been made individually by various makers - and they have not been prolific enough to gain their own name, or be employed as anything other than novelties.

There was an instrument made called the Octobass.

Yes, they were real. They were experimental, and I'm sure they were horrendously expensive and difficult to build. But they were all built before the era of electronic amplification, which gives a clue as to why they existed.

They could play the very low notes of the 32-foot ranks of a church pipe organ (lower than the conventional acoustic double-bass) yet they were somewhat portable (compared to a full pipe organ!).

Once the Hammond organ and similar electronic instruments with their amplifier and speakers were invented, I imagine there was less of a perceived need for these massive acoustic string instruments. And of course from 1952 forward we have had the amplified electric bass guitar and synthesizers that can go very low, and play as loud as anyone could imagine.

Not the answer you're looking for? Browse other questions tagged history double-bass or ask your own question.

12
An instrument needs two or more to play