Composition - How to connect musical periods

How do you exactly keep a continuum between musical periods? And somewhat related, how exactly do you tell a story with it?

I am trying to compose something for piano, and while I'm able to connect various phrases that make sense and have a clear ending, I can't seem to be able to connect more periods that make sense together. They seem unrelated, just something in the same key merged together. I'll edit later in a sample of what I'm doing or a screenshot of the piece, maybe - if it's not too much - you can pinpoint what I'm doing wrong, or what I could do better.

EDIT: Here is the piece in question. Also a screenshot of it:

EDIT2: Thanks for the work behind the answer, Patrx2. I am actually trying to compose for the piano not knowing how to play the instrument itself, hopefully it won't be too much hard!

While composing, I more often than not, consider a chord block and melody block as sort of separated entities. I find it more easy to think this way, but I guess this is one of the things that separates full-fledged composers from beginners. One of the things you're saying is, should I give more thought to the individual voices separatedly?

I know that in harmony there are some rules - conventions maybe is better - about how voices should move, or how should I set certain chords before using them. Are those conventions a part of what makes a melody have sense or have not?

EDIT3: I don't have anything to ask anymore, you've really been of help, thanks a lot again! It's actually been in my mind for quite some time, I believe it's time I really get myself a keyboard, for the better.

Tentative answer, and I may edit it as I see your edit, is that you are using periods where they shouldn't be used. Periods are, by their very nature, a rounded musical paragraph, with a dominant in the middle and a tonic at the end: they're great if you're looking to confirm a tonality; less so if you're looking to elaborate a tonality. So, periods are good to set up a tonality, and good to round one off. Use them when you have a rounded-off theme. If you use them all the time, though, you run the risk of having your music come to a dead stop all the time with all those perfect cadences, and it sounds to me like you may be finding that out firsthand.

Ending phrases with other cadences is definitely possible. Overlapping phrases is also possible (ending one voice's phrase while another voice is already starting its phrase), and frequently desirable. Remember that your accompaniment consists of voices that can develop a certain independence at times. (Haydn, Mozart and Beethoven were all good at evolving accompaniments into primary or secondary voices and back again.)

Edit: Oh my! How did you get stuck way up there?

Here's some thing to look at. I won't claim it's great (not my usual idiom), but it isn't falling apart quite so much, so it gives us something to discuss. 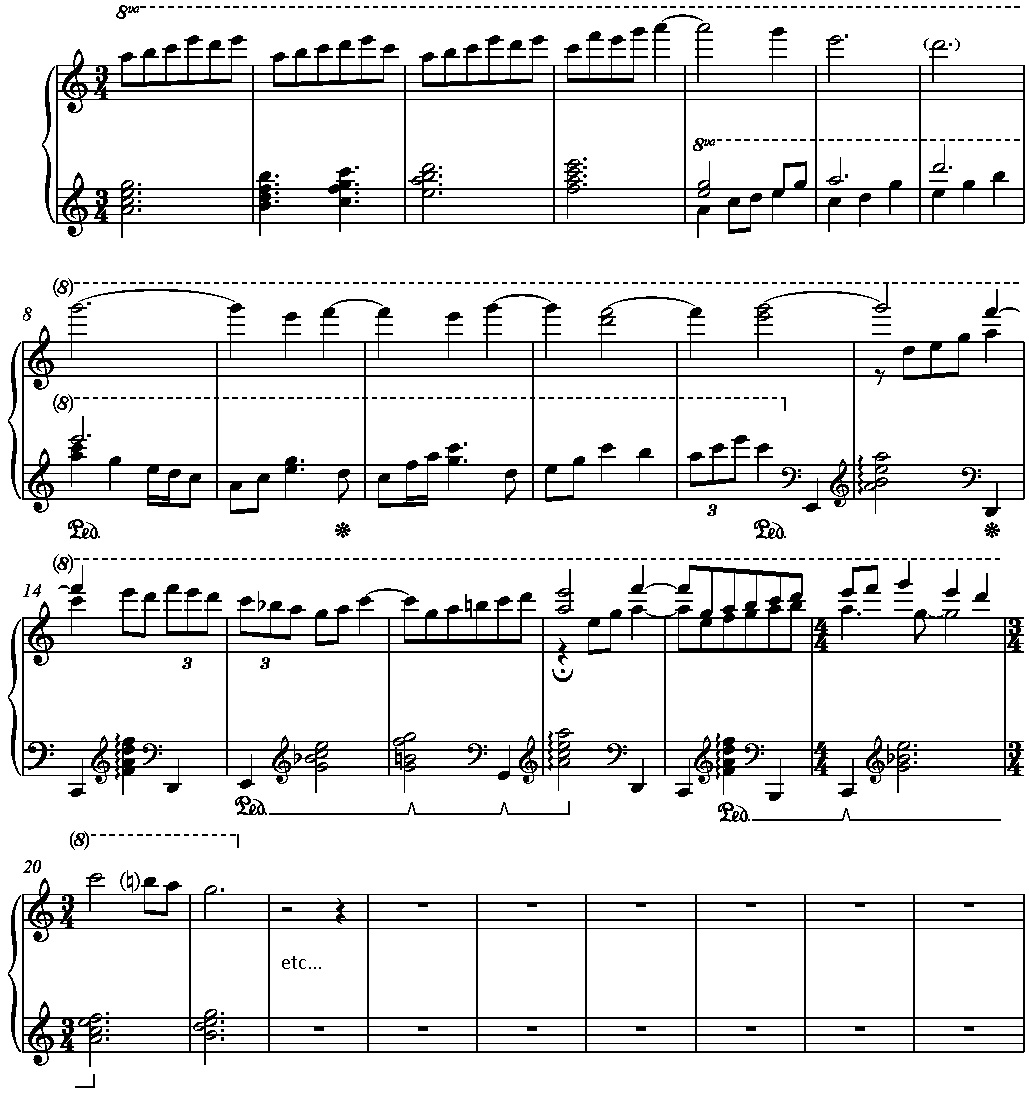 This is going to be more difficult to play, to be sure. (The bass notes, which really add to the difficulty, are there to give the passage an incentive to come back down out of the clouds.)

The first four bars are pretty much as you wrote them. The changes really start in the 5th bar, and they kind of accelerate from there. In the left hand, I thickened up the beginning of the bar so that it follows the previous phrase better and added some melody notes to push into the rising passage. The biggest change, however, is, rather than leaving the previous phrase's final high A in the right hand high and dry, I created a simple counter-melody.

By the time we get to m.8, I'm leading your original harmony into a LH figure that extends into m.9, while maintaining the simple counter-melody in the RH. This gives the phrase overlapping I was talking about. The real end of the phrase in the left hand is the 2nd beat of m.9. The counter-melody does add some suspensions to tie the phrase together. I added a few non-harmonic upbeats in the RH for the same reason.

By the time we get to m.13, however, the changes start becoming substantial. The melody through to m.17 is based on yours, but filled out with non-harmonic tones and reharmonised. Even in a period, you are under no obligation to start a phrase with the tonic. You'll notice that the highest voice is overlapping the start of the phrase.

The first point of instability shows up in m.15, in the form of a C7 harmony, which "resolves" into a G7 in the next bar (cancelling the B♭ in the process). The second comes with the fermata on the first beat of m.17 (I forgot to add fermate to the other voices): I pick up the melody from the middle of m.15 a whole tone lower (with some small changes) - its a modified sequence. This creates a rhythmic instability that pretty much demanded the extra beat in m.19. Notice that the C7 returns (and is again canceled in the following bar). By the time I'm done, I end up on the G M6 chord. From there, I can start something different.

The main things to take away from all this:

2nd edit: Yeah, in some ways those conventions are part of what of what makes a melody make sense. In other ways, they come about because the strong intervals in melodies tend to be whole- and half-tone steps (as opposed to the more open intervals that are stronger harmonically) - it's a bit of a "chicken or the egg?" question. It's like, on the one hand, you can see a melody as a voice in the harmony that has been brought to the fore, and on the other, you can see block chords as superimposed voices that are working in lockstep.

There has always been some tension between how Western harmonic theory deals with the vertical, and how it deals with the horizontal. The need for conjunct motion in the voices making up the harmony leads to notes being sounded that don't fit the conceptual framework of the underlying chords, and hence these notes get called "non-harmonic", e.g., passing tones, suspensions, anticipations, appoggiaturas, etc.

Are these notes really non-harmonic?

Not in the least. At some point in your composing life, you'll run across a situation where you use non-harmonic tones according to the "rules", and find you've blown the tonality of the passage right out of the water. In other situations, a conventional use of non-harmonic notes over a common chord leads to a new standalone chord. The dominant seventh chord got its start that way: it originated as the suspension of a seventh over the dominant triad that resolved by a downward step to the third of the tonic chord. After a while, the preparation of the dissonance became unnecessary, and eventually, even its stepwise resolution did as well.

The tl;dr is that, yeah, there are times when it's very fruitful to look at your chords as voices working together. If you do so, you can have your melody extending a phrase when the accompaniment is ending one, or vice versa. Looking at the entire texture as voices working at times somewhat independently can allow you to spin a very long line in your music; it can allow you promote voices out of the background to act as responses to, or "sing duets" with, the melody, and then retire them into the background again; it can allow you to use the accompaniment to bridge motivically between different ideas in the melody.

That's not to say that using chords as splashes of harmonic colour is necessarily a bad thing. There are certainly times when chords used that way are great for amplifying the implications of a really dominant (in the sense of being in the forefront) melody - a lot of jazz "comping" works that way.

That's also not to say that you aren't already doing some of this instinctually: the chords in your first phrase have a fairly strong melodic thrust to them.

A word of advice: get yourself a cheap keyboard just so you can feel how the hands have to move in response to what you have written. I'm not primarily a keyboard player myself, but I write a lot for keyboards (although I have never written at the keyboard, not even back before computer notation programmes existed). I know how the instruments work, and I have some pretty good heuristics to keep the piece real while I'm writing it, but I like to bench-test my pieces for practicality after I've finished writing. I figure that, if I can work my way through a passage slowly, a reasonably skilled keyboard player can do the same at tempo.

0
What musical scales should I include in my electronic musical composition tool
3
What might make for “ambient” or “atmospheric” classical music?
15
Use of Music Theory in Composition
8
Expanding chord progression repertoire when composing
2
How to simplify a midi file similar to the same limitations of a player piano
1
How do I go about selling my musical composition?
1
How to keep going in the fugue
5
Will this help me avoid parallel octaves in future fugue attempts?