Key Changing in a Song?

How do I change keys? "All by my self" - It was in the key in F major and transitioned to C# minor in the middle of the solo.

I noticed that "All by my Self" and "Never Going to Fall in Love Again" by Eric Carmen were based on the third movement of Rachmaninoff's Symphony No. 2.

If you view the piano solo in Celine Dion below, you will notice that it changes keys.

Here he says that the key signature switches

1) How do i change keys in a song or piano solo?

2) What are some tips for doing it neatly and smoothly?

3) What are some tricks or some easy ways to go about it?

4)Is this considered chromaticism or chromatic passing chords?

5) If I wanted to do it in C major and then transition to G minor how would I do it?

6) What are some good key changes that work well together?

First of all, I do not think that there are keys that "do not work well together". There are just better or worse ways to make a transition from one key to another. Obviously, there are keys that are very remote from each other, but nevertheless, a good composer will be able to make a convincing transition. Of course, certain key changes occur much more often than others, especially changes between closely related keys. However, these more common key changes also have less potential to create an interesting effect.

Changing keys is called modulation, and in the Wikipedia article on modulation you'll find a lot of useful information, especially about traditional (i.e. classical) ways of modulation. I will mention a few tricks (some of which fall into the categories explained in the article) that are used in popular music, because I think that's what you're interested in:

I think that these types of modulations cover a great deal of ways to change keys used in pop tunes.

Now for an example, as suggested in your question. If you want to modulate from C major to G minor you could use the third approach explained above, i.e. use a 2-5 progression approaching G minor:

1+2+3+5. If I get what you mean, some keys do not work well with each other, so make sure that you find out if the two keys sounds nice together before you make the change (plan). Use a circle of fifths! If the two keys you want are far from each other, they don't sound good as a transition! To change midway, you need to "prime" the audience - make them know you are about to key-change. A nice way is to use dominant-7 chords - they are great in making key changes! Another thing to know - when changing keys, find a note they share and use it at your advantage - here in this pic, I know A minor and E major share the common note E, so I used that. 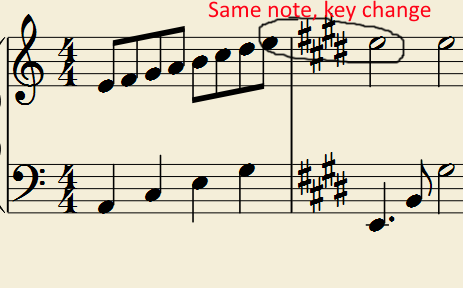 6) Have you seen the circle of fifths? It is a great way to start. The circle of fifths is always used to make up some good chord progressions (and they sound good) so it is a good idea if you can change the song key's signature using that circle, too! Simply locate the key you are in, and anything beside it will sound great as a key change.

Not the answer you're looking for? Browse other questions tagged theory chords key modulation or ask your own question.

3
Modulating between minor keys
4
How to transition between chord progressions of two songs in different keys?

9
How to determine what key changes are appropriate?
4
How to write music using standard notation / Finding key
10
Determining Key / Key Change / Chords?
2
Why are most string quartets in a key with few sharps or flats?
1
Key modulation in a fugue, how to not lose sight of the tonic?
5
How is Beethoven able to make so many sudden shifts in key?
0
Use cases for modulating keys?
3
What kind of modulation is this?