I'm trying to learn a classical guitar piece, Valse by Napoleon Coste, and the score specifies that I am to play a partial capo at the beginning of the piece. I'm unsure what the 4/2 means in front of the ₵II. Is it the number of frets I should barre?

Here is a picture: 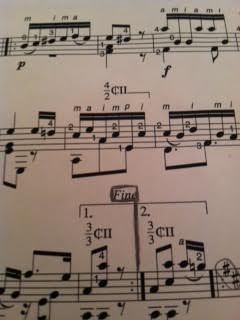 Okay, after quite a bit of thought I think I have worked this out. However, before answering, two things: firstly, I have to say, I haven't seen this notation before and it doesn't seem very helpful; secondly, the other answer and comments helped me work this out.

Also, it is worth pointing out for other readers, that this passage of music has the key-signature of A Major, as this isn't shown in the picture.

The clue is in the 4/2 marking in your picture. A common way to play this A major shape is to use a first finger barre that presses down fret 2 on strings 3 and 4 only, with the second finger pressing down the C# at fret 2 on string 2. (This avoids what I call the A-Chord-Problem, where it is difficult to keep fingers 1, 2 and 3 all close to fret 2, which I describe in this answer.) As I say, it is common to use this two-string-barre to play this chord shape, particularly in classical guitar music. So, I'm pretty sure the 4/2 half-barre notation used here means "extend a barre over four strings (i.e. strings 1-4) but only press down the top two of these four strings".

This would mean that 3/3 and 2/2 would also make sense. In the example above the 3/3 barre fits with this explanation too: you would do a half-barre over strings 1-3, in order to play the A and C# at fret 2 on strings 2 and 3. Although you don't need to play fret 2 string 1 here, it still makes sense to press it down, as it is harder not too! Hence the 3/3 marking.

Like I say, I think this notation is unhelpful; much of the information would be fairly obvious from the fingerings and position markings alone. The extra information merely "clutters" the part.

Here is the same passage, from an older edition that I found at IMSLP: 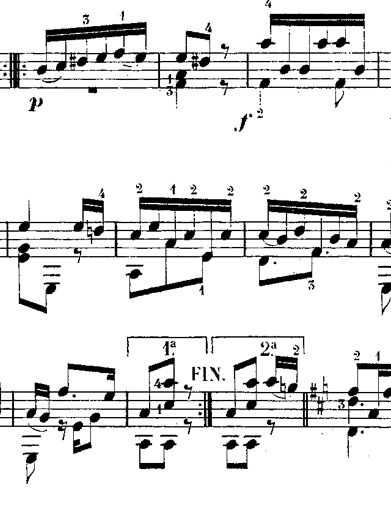 This seems to have the same fingerings, and is therefore identical, apart from the barre markings. I would say that the fingerings make it perfectly clear how to play this passage, and that the barres would be implicit, and most guitarists would work them out while playing the passage. And anyway, as @Tim points out, fingerings are only suggestions anyway. To give an example; whether you use a barre in the A major bar discussed above, or whether you lift finger 1 from the A on string 3 to the E on string 4 is largely a matter of taste. It depends upon whether you want the full arpeggio to ring here, or whether you would like a little more definition in the bassline, which lifting the A would achieve.

From the picture, it looks like the top number indicates how many strings are part of the barre, and the lower number indicates the un-barred strings. But if there's really a 2/2 in there, then this can't be the answer.

Not the answer you're looking for? Browse other questions tagged guitar sheet-music classical-guitar or ask your own question.

4
Should I look at my fingers or look at the music?
4
Learning guitar, start at low end or high end?
7
If the time signature changes, does the key signature change as well?
2
Should my fret be buzzing on my recently bought guitar?
9
Exercises to improve guitar playing while singing at the same time
4
Is it wrong to alter bar numbers after repeat endings so they reflect the performance progression rather than the last repeated measure +1?
4
What is the definition of slow practice for classical guitar?
40
My son is 6, and his guitar teacher wants me to buy him a 4/4 guitar!
2
Which Fret do I Indicate on an up-the-neck chord chart that is using a capo?
3
Classical Guitar: Can someone reference this piece of music allegedly by Carulli