I understand intervals between notes. Each number of steps between two notes has a particular name. Like this: 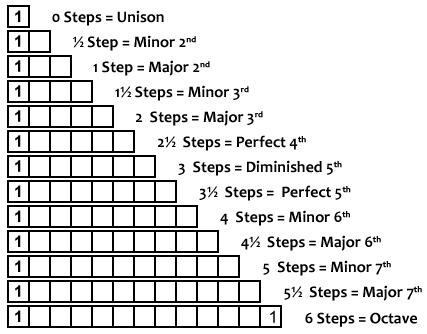 But some times I see people refering to intervals between chords, not single notes. Like this: I, ii, iii, IV, V, vi and vii.

What does that mean?

Take a major scale. There are seven different notes in it, so starting from the root note of the scale, number each note (In C major, you'd have C=1, D=2, etc). If you build a chord off of any of those notes, you can give it the number of whichever root note you chose (In C major again, Cmaj would be 1, Dm would be 2, etc). When Roman numerals are used, they indicate the type of the chord -- capital letters are major chords, lowercase letters are minor chords. With a major scale, the chords you build off of each note are going to follow the pattern of major, minor, minor, major, major, minor, diminished or I, ii, iii, IV, V, vi and vii (vii should properly be followed by a degree sign to indicate it's diminished, not minor).

When people are discussing a chord progression, you they might write something like I-vi-IV-V. This means for whatever key the song is in (or whatever key you want), play the Major 1 chord, followed by the Minor 6 chord, then the Major 4 and the Major 5 chords. This system is used because it lets you know the structure of a song independent of the key it's in, making it easy to transpose.

This is the notation used in music theory to indicate specific chords in a key.

5 3 (or none) next to a triad indicates root position so for instance If your chord is C/E/G the see would in this case be bottom.

6 means first inversion. So this case it would be E/G/C or E/C/G.

6 4 means second inversion. So in this case it would be G/E/C or G/C/E

The confusion here stems from the fact that theorists use roman numerals to describe a chord's position in a scale, and specific intervals for any two notes.

Your chart is specific intervals. These consist of a generic interval (the number) and a quality (major, minor, perfect, augmented, diminished, etc.). Note that most of the time, those charts are listed in half-steps; I've never seen anyone refer to an octave as six steps.

THe roman numerals you mention are different. Those refer to chords' diatonic functions. They also consist of a number and a quality, but they mean the chord. For example, in C major, iii means the chord is built on the third of the key (E) and since the iii is lowercase, it's a minor chord, so it means Em.

Chords consist of intervals. However, the way we describe the two are different. Intervals use specific interval naming, like m6, and chords often use Roman Numeral Analysis, like V.

25
What is the full list of possible chord names? Are there chords that don't have a name in chord theory?
5
What's the term for the intervals between notes within a scale that produces a chord
4
“I-vi” in Major or “III-i” in Minor?
3
Naming Intervals — Tactics, Strategies, Tricks
4
What are weak and strong chords?
28
If someone can sing a melody, why can they not also recognize the intervals within that melody?
5
Help me understand the chord progression in Tatsuro Yamashita's 'Sparkle'