How common is the complete circle of fifths progression?

A complete circle of fifths progression would go (I)-IV-VII-III-VI-II-V-I, and it's taught that way in textbooks, but it seems to be rare in actual music. Could you give me any examples of songs that use a complete 4-7-3-6-2-5-1 progression consecutively (i.e. not 7-3-6 somewhere here and 2-5-1 somewhere over there and 1-4 some more bars after, but 7 chords straight). I heard gospel music uses this sometimes, but i was told that the "7" here is not always a diminished chord- they use an altered chord instead?

Edit: The purpose of this question is to learn patterns, including chord progressions from examples in existing songs and music, not for identifying any specific song.

I'm not sure if you're interested in classical examples, but this kind of thing happens all the time in Baroque music, almost to the point of being ubiquitous. One quick example that pops to mind is this section from Brandenburg Concerto #2. Start the passage right at (or slightly before) 2:00 (apparently SE doesn't honor t=### tags in youtube links). This section is in D minor, and the chord progression is:

The best way to see this is to look at the bass line (bottom two staves on the right side of the screen). The chord changes every half-measure, and the first bass note of each half-measure is the chord root. The left-hand side of the screen is the soloist instruments: a trumpet in F (you need to transpose the written pitch up a fourth), a recorder, an oboe, and a violin.

Especially in minor you'll find this progression quite often, actually so often that it has become a cliché which many people try to avoid. One example of this progression (in minor) is "Still Got The Blues" by Gary Moore (in A minor, so it starts on the D minor chord). The II chord (which would be the VII chord of the relative major key) is a half-diminished chord in this case: Bm7(b5)

EDIT: One more famous example (which I just remembered because I saw it on one of my setlists): "I will Survive" by Gloria Gaynor!

How about "Fly Me To The Moon" by Bart Howard? The verse is:

That's all the way round, 6 2 5 1 4 7 3 6, all diatonic to C major, with the exceptions only of that final E7 and the C7, both of which can be considered secondary dominants, 5 of 4 and 5 of 6, respectively. Both strengthen the forward movement of the progression.

Of course, that's dropping a diminished fifth from F to Bm to stay in the key rather than go through all twelve steps in the cycle, but that looks like what was requested.

The raised 5th scale degree that forms the major third of the E7 chord is present in the melody, and the flat 7 degree to make C7 is only in the harmony.

Part of the Ukulele Orchestra of Great Britain's is what they call Fly Me Off the Handel -- a medley of several tunes, some of which do a complete diatonic circle of fifths. The best examples I think are the first two and "I Will Survive".

it'so common that you hardly can't find a piece in baroque that doesn't contain the whole circle of fifths. Vivaldi, Concerti grossi of Händel, Bach (e.g. the Violin Concerto in am (the beginning of the soloist part)

as well in pop music, I was immediately thinking of the same songs already mentioned.

ANSWER: It is incredibly common in tonal music.

In major keys, the progression is I-IV-viio-iii-vi-ii-V-I. I've went through various examples of this progression in classical music.

For example, the first movement of Mozart's Symphony No. 25 contains the progression I-IV-viio-iii-vi-ii-V7-I in Bb major: 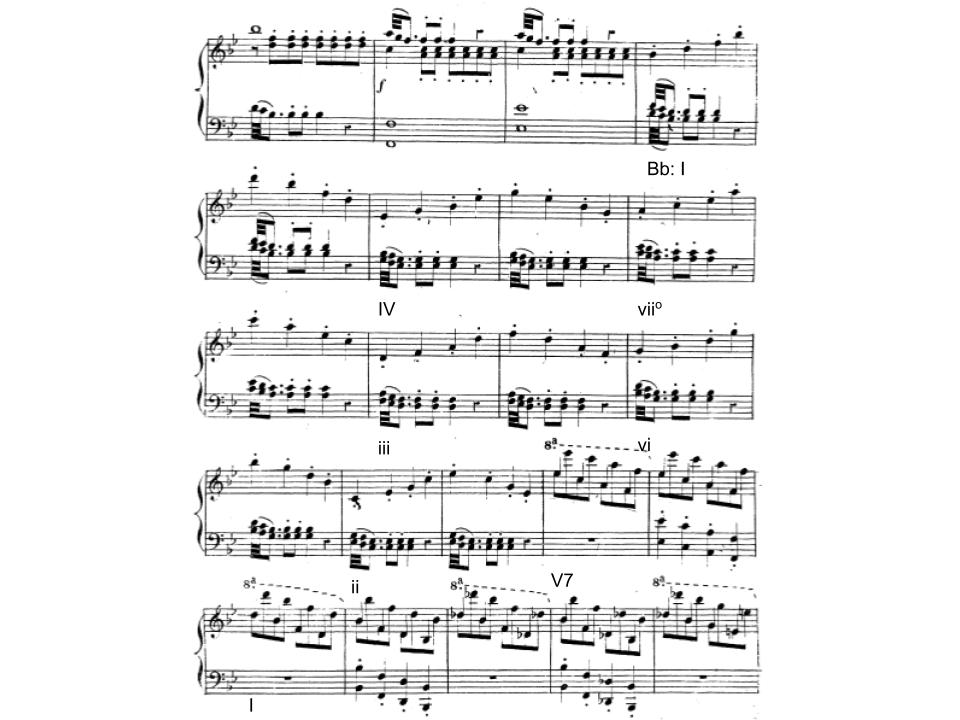 The scherzo of Beethoven's Symphony No. 9, Choral, also has a chord progression in C major that goes like I-IV-viio-iii-vi7-ii43-V-Group-I: 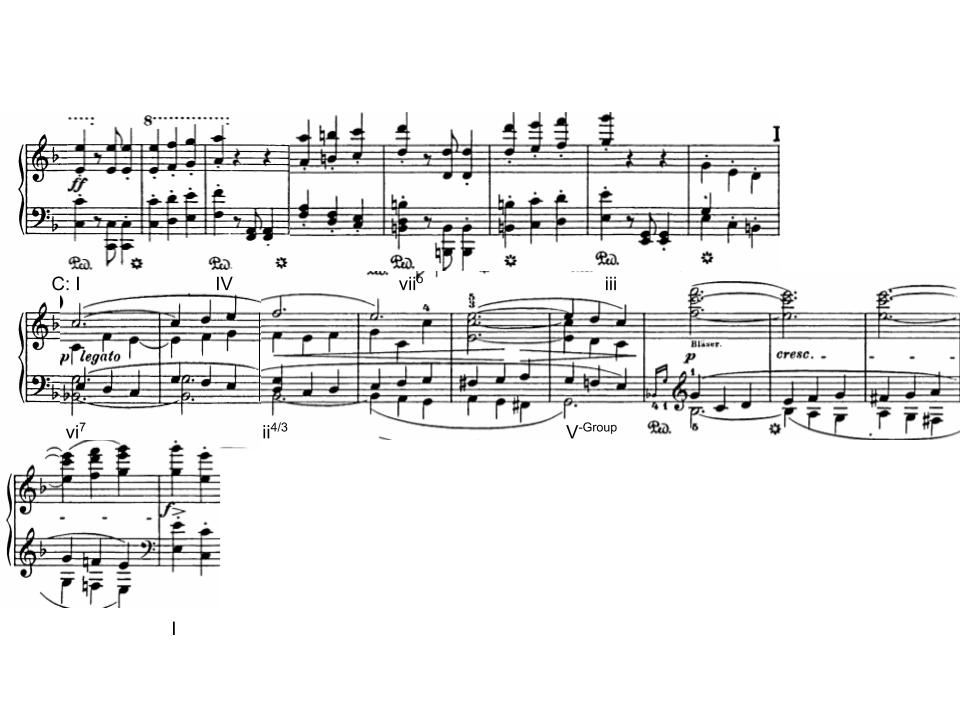 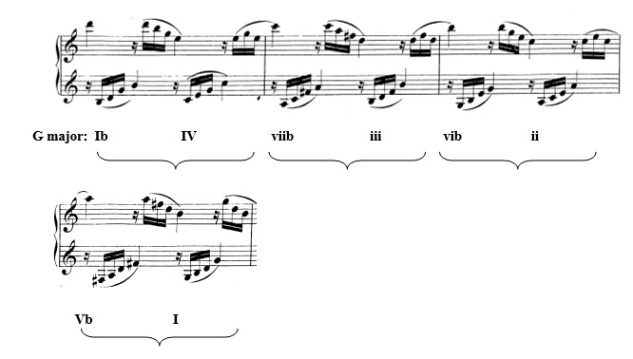 I've also found circle of fifths progressions in other genres - for example, anime music. The ED theme of My Neighbor Totoro contains a progression of I-IV-viio-iii7-vi-ii7-V7-I in F major:

The OP theme of Blend S also contains I-IV-viio-iii7-vi-ii9-V-I in the same key:

In minor keys, the progression basically appears as i-iv-VII-III-VI-iio-V-i. 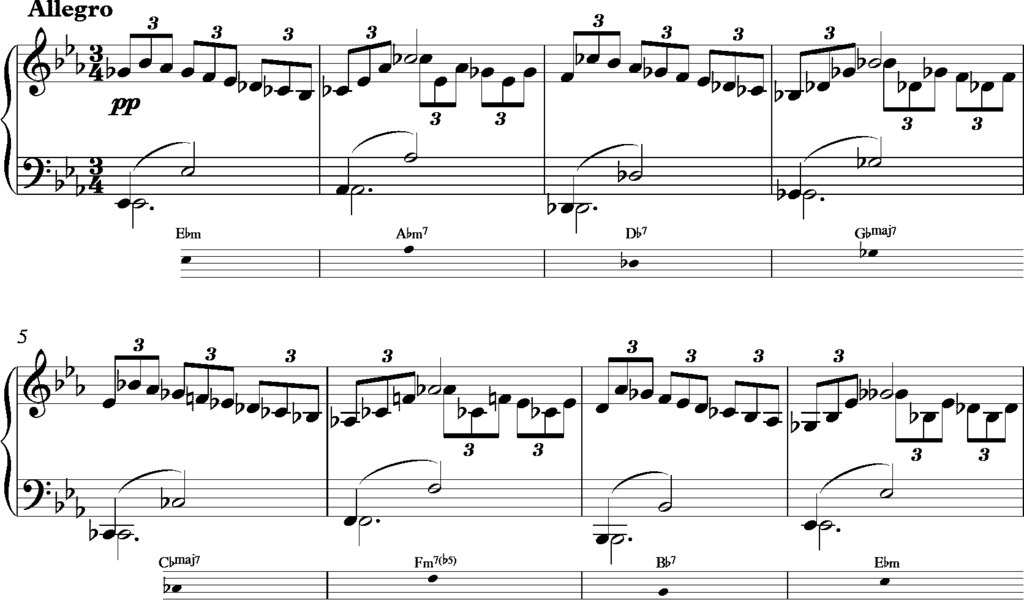 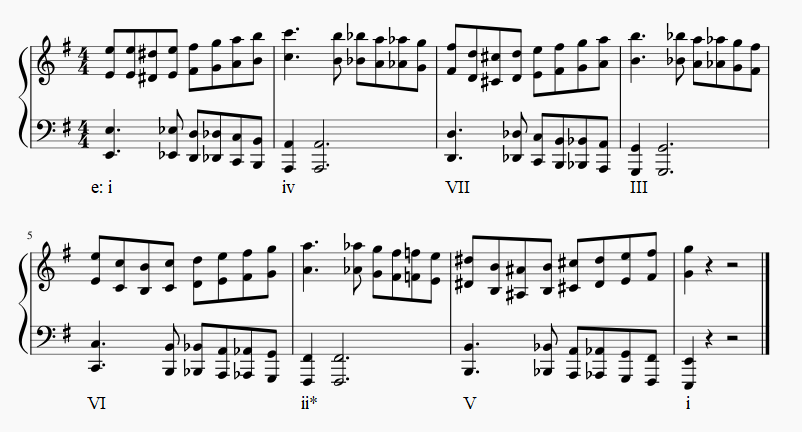 The finale of Shostakovich's Symphony No. 5 in D minor has a chord progression of i-iv7-VII-III-VI-iio-V-i:

My answer is getting too long, so I guess I'll have to stop here. Anyways, thanks for your question!

My friend... it is absolutely all over the place. It's actually my favourite sort of chord progression, which is a shame because, as one of the commenters already noted, it's kind of cliche'. I don't care though, I think it can still be used well if it's used sparingly after a build up. Here are some examples:

Another example is in Mozart's Symphony no. 25 in G minor. The progression starts at 1:03 and ends at 1:28 in this video, this time in a major key (B flat major).

Anyway, my girlfriend is annoying me so I have to leave you with that.

HALF of it is quite common - a piece in C major which jumps to a F# chord then cycles back home. Here's a very common variant - a cliche ending in fact - where every second chord is a b5 substitution.

You can even substitute the basic bass notes back! If you see what I mean...

The circle of fifths is more common in minor mode works (I would guess) because the final three chords are ii0,V,i so the diminished chord is in a good place. In the major mode, the diminished chord occurs on the third chord. Sometimes composers just drop the vii0,iii part.

Luckily, I am collecting a list of songs with this exact chord progression (I became obsessed after the ukulele orchestra):

you never give me your money - beatles
brandeburg concert no2 in f major - handel
wild world - cat stevens
the globalist - muse
All the Things You Are
Still Got The Blues - Gary Moore
Million years ago - Adele
George Frideric Handel, Suite in G minor, Passacaglia
Fly me to the moon
The autumn leaves
Killing me softly
Hotel California - the eagles
I will survive - gloria gaynor
i love you like a love song - selena gomes
mulheres - martinho da vila
rap do silva - mc bob rum

and I am also looking for more.

Also, in most songs with the i - VII - VI - V chord progression you can fit the other chords of the progression and will fit well.

4
Why is the complete circle of fifth progression more common in minor than major?

9
Is this chord progression III I II III?
4
Why is the complete circle of fifth progression more common in minor than major?
3
Music Theory, Circle of Fifth, Chords that fit, Exceptions and example song "Sultans of Swing"
4
What are weak and strong chords?
0
Why does this chord progression work? I feel like I've heard it before but can't find the pattern
3
How can one analyze the chord progression from "Your Affection (from Persona 4 soundtrack)" by Shoji Meguro?
1
Understanding method of applying modes on chords
9
How to apply Paul Hindemith's harmonic theory
4
In the context of G Major, is there anything special about a Am-Cm-Bm-Em progression?