What did ancient cuneiform notation look like, and how did it work?

I looked at Wikipedia of course...

The earliest form of musical notation can be found in a cuneiform tablet that was created at Nippur, in Sumer (today's Iraq), in about 2000 BC. The tablet represents fragmentary instructions for performing music, that the music was composed in harmonies of thirds, and that it was written using a diatonic scale.[1] A tablet from about 1250 BC shows a more developed form of notation.[2] Although the interpretation of the notation system is still controversial, it is clear that the notation indicates the names of strings on a lyre, the tuning of which is described in other tablets.[3] Although they are fragmentary, these tablets represent the earliest notated melodies found anywhere in the world.

Does anyone have a clear representation of that notation style or explanation of how it worked?

One of the clearest examples is a tablet from Ugarit that is generally labelled h.6. If you search around for Hurrian Hymns, h.6, and Hymn to Nikkal you can see some drawings and photographs. Some of the primary scholars that have written and attempted to decode the notation system are Anne Draffkorn Kilmer, Martin West, Richard Crocker, and Duchesne-Guillemin. They disagree on most fundamental aspects as to what the music would have sounded like and how to decrypt the notation. I've read most of the articles available on Jstor and done enough study to teach a class that looked into some of the possible interpretations, so I'll try to summarize some of the primary findings.

We have found a tablet at Ur generally labelled UET.VII.126 which pretty clearly appears to be a list of names for the strings of a 9-stringed instrument called a šammu. Although some scholars have argued that it was a harp (with strings pitched due to different lengths), the consensus seems to be emerging that it was a lyre (with strings given pitch primarily through tensions). The string names below are given first in a possible transliteration of Sumerian (the earliest language to use cuneiform writing), then a transliteration of Akkadian (a later language very different from Sumerian, but which also made use of cuneiform), and finally in the translation that most scholars seems to have agreed on.

The tablet then concludes with the words "9 pi-it-nu (pitnu)" which translates as "9 strings."

The next tablet to provide important evidence was found at Nippur and is usually labelled CBS 10996. It introduces a set of 14 terms that appear (fairly clearly) to be names for pairs of strings (using the same terms as in the other tablet). So, for instance, it says that string 6 and string 3 (the "fourth behind string" and the "third, thin string") are together named "kitmum." A lot of the tablet has had to be reconstructed based on fairly obvious mathematical principles. I'll put what scholars are fairly certain is a good reconstruction. The first transliteration is M.L. West's reconstruction of what the Old Babylonian names would have been, the second is in a very different cuneiform-script language called Hurrian (this is the language used in the actual musical examples that we have such as h.6). The numbers at the start are which strings being paired together.

This tablet was found at Ur just like the other one I discussed, but it took a while before it's significance was realized. It's called UET.VII.74, and it is now often referred to as the "tuning" or "re-tuning" text. It appears to be instructions for changing the tuning of the lyre-type instrument, and it uses all of the string and string-pair terms that are explained in the previous two tablets I described. Every "verse" of the text follows the same format:

Far less certain is the assumption most scholars make that all of the odd string pairs in the CBS 10996 list were not just fourths or fifths apart in terms of strings, but also in terms of interval. In other words, most scholar assume that strings a fourth or fifth apart were also INTERVALS a fourth or fifth apart. They further assume that when this tablet refers to a particular string pair as being "unclear" it means that it is a tritone apart as opposed to the perfect fourth or fifth that would presumably be heard as "clear."

Finally, there is significant disagreement about whether string 1 would have been the highest pitch or the lowest pitch. This is particularly contentious, so I won't take a position either way. The upshot is that most scholars are fairly certain that the strings would have been tuned essentially to our diatonic scale (technically Pythagorean) and that the seven tunings referred to in UET.VII.74 are equivalent to our seven modes (without any assumptions about what string, if any, would have performed a "tonic" function). The tuning names, intriguingly, are the same as the names for the fourth/fifth string pairs.

If the pitches descend from string one, the modes are:

If, on the other hand, the pitches ascend from string one, the modes are:

From the majority of the surviving tablets of actual notation, the Hurrian hymns, it appears to be the case that the tuning of any given piece would be stated at the bottom of the tablet. h.6 for example, is labelled as being in nid qablim tuning.

The notation itself is particularly difficult to figure out. It consists almost entirely of string pair names followed by numbers. For instance, the beginning of h.6 is:

Here is where the scholars diverge almost entirely. Some guess that the player simply plucked the indicated string pair x times, where x is whatever number follows the string-pair name. Others think that some sort of scalar passage was being indicated, others think the singer (there are also lyrics elsewhere on the tablet) took one of the indicated notes while the lyre-player played the other. There are a lot of fascinating guesses, but nothing is entirely satisfactory as a solution. You might enjoy trying to come up with your own interpretation!

That took longer than I thought it would. I'll try to find some time to update the answer with some clearer examples. Let me know if there's anything that would be helpful. 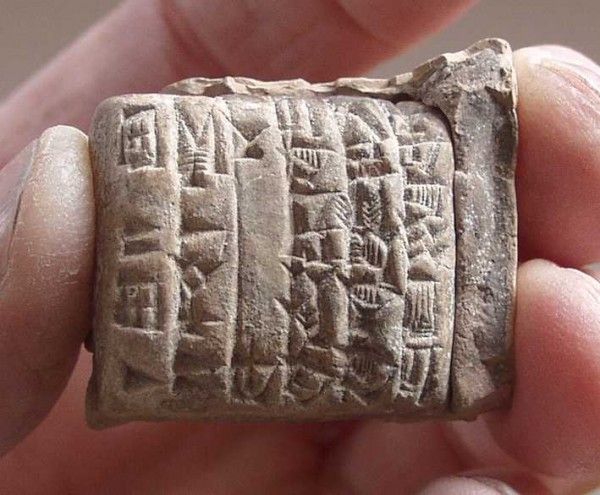 This is from smashinglists.com, and it is noted there:

A cuneiform tablet from Nippur in Iraq dated to 2000 BCE indicates the names of strings on the lyre and represents the earliest known example of music notation. Although these tablets were fragmentary, these tablets represent the earliest melodies found anywhere in the world.

Not sure about the original source for this, because the source noted there is a dead link. I also have absolutely no idea what it says ;)

3
Prevailing theories about discovery of harmonic intervals
1
What do we know about the oldest found melody?

21
How much do we know about how ancient Greek and Roman music sounded?
4
Trying to program a piano staff/stave. Is this what it's supposed to look like?
4
What does this weird notation mean (looks like "#.1")?
16
How did Mozart know about voice leading rules like consecutive fifths?
1
"arranged by ____" v.s. "notation by _____" - what did the notation person do?
14
What kind of musical scales did the ancient "pagan" tribes use before Roman/Greek contact?
6
What does syntaxes like T1, D2, and p3 mean in music notation?
8
How did the ancient Greeks notate their music?
1
How did the ancient greek Ionic dialect become the name of the first mode of the diatonic major scale?