I'm confused as to how I should play the second note below, B#. Does it mean it's C? It is possible? In which case, why is it written like this, and not just C? 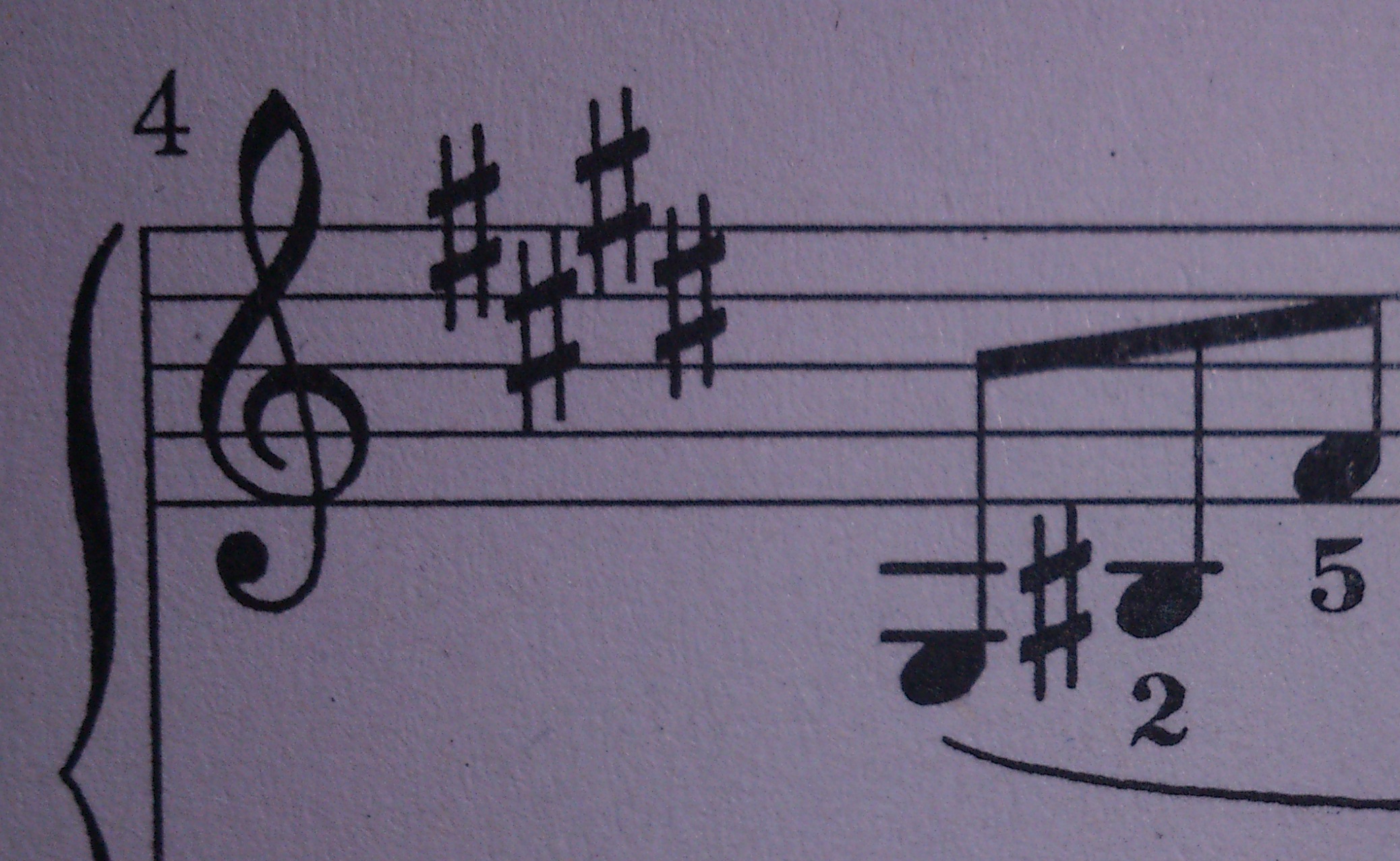 In a key where there are already some sharps (or flats) in the key sig., as here, every time one of those notes is played, it has to be sharp (or flat). In E, or C#m, the key here, every other note is natural - E, A, and B. So if a note sounding like a C needs to be played, it can't just be written as a C, because the player would automatically sharpen it, to play C#.

So there are two ways to write this actual note: C natural or B sharp. It will depend on the technical nature of things, like what would that note have been before it needed to change. If, for example, the harmony underneath produced an augmented chord, where E, G#, B became E, G# B# that would be how it was written. If, on another tack, the chords underneath went from A maj. to Amin., then the changed note would not be C# any more, but C natural.Thus spelling the chord properly, even though it's only one note out of that chord.

On the face of it, it seems unnecessary, but from a technical point of view, it is correct. Lots of players would probably be just as happy reading a C natural, but the next glitch MAY be that any subsequent C# in the bar would then have to have an accidental written in, which is extra stuff to read.

The note is the same key as C.

It is written as B# instead of "C natural" to indicate note's "role" according to rules of classical (musical) harmony.

This thing is kinda a big deal in classical music and music in era of romantic music (Franz Liszt, Franz Schubert, etc... not sure if Liszt is ) because the same chord can be perceived differently (when played in chord sequence) depending on tonality of the sequence/part where it is played.

Unless you're speaking of atonal music, you can't normally just set sharps/flats/naturals randomly. Hence the B# instead of C natural.

That's the gist of it.

A more focused question on this idea can be seen in this question as to why notes get alternative names.

If it was written as C, it would be actually C# ... because you have four sharps on left (those ####) and they basically mean that:

Which is E major. Instead, they write it as B# because they want you to play actual C.

It could be also written as a C with a natural sign ♮ ... the natural sign would "cancel out" the sharp # on C.

I would just like to clarify a couple things that I don't think have been fully articulated.

First is that there is a distinction to be understood between the concepts of "note" and "pitch". A note is a symbol in a score. It represents a pitch to be sounded. Enharmonic equivalence is idea that the same pitch can be represented by different note names. For example, the notes D# and Eb represent the same black key on the piano. What we see here is that the pitch which we are accustomed to name by the note C is named by the note B# instead. They are enharmonic equivalents.

With regard to the second part of the question, "why?": there is a reason that notes in a scale are spelled the way they are: every note in a major or minor scale has a specific function and a specific relationship to the other notes in the scale. The spellings express these relationships and functions. The function of the seventh scale degree is usually to produce a high degree of harmonic tension which urgently wants resolving.

A principle that goes along with this is that notes which introduce tension are generally resolved in specific ways. The seventh scale degree is often called "the leading tone" because in most cases it resolves up to the eighth (tonic) scale degree. It would be quite out of place to spell this note as C natural; the implications of that spelling are quite contrary to the harmonic function.

Add disclaimer Some people apparently couldn't understand what I was getting at with this answer, or don't understand humour or whatever, and therefore flagged the answer. I assure you that any misspellings found here are entirely enharmonic in nature, and thus don't matter. Or do they? If you think so, you've got the point I'm making.

It is knot a C. True – if ewe whir asked two play that note on piano (or indeed most other western instruments), you'd use the same key/fingering as ewe wood four ♮C, butt it's still knot the same note: conceptually. Think of it like to words witch happen two bee pronounced the same way, butt mien completely different things, are written differently, and even when spoken can bee distinguished, buy the context.

(And, they are not really spoken inn exactly the same way; pronounciation always varies a little. That's also true four music; good singers ore players of e.g. string instruments use not exactly the 12edo pitches a piano wood produce, butt adjust their intonation two best match the context. Normally, the result is something between 5-limit just intonation and Pythagorean tuning.)

How that works is discussed inn other questions on this sight and elsewhere. In this particular case, B♯ occurs quite naturally as the leading note of the dominant G♯7, leading up two the c♯ miner tonic. OTOH, a C wood appear weird and out of context, since it actually affects the tonic itself with an accidental. So even four an experienced pianist, though heed physical execute the same movement, C wood bee the wrong instruction at that point, like it wood bee confusing four a newsreader if he had two read out the text of this answer.

It's nothing whatsoever to do with imaginary problems in writing a C natural! It's about spelling a major 3rd above G# correctly, and making the interval LOOK like a 3rd, not a 4th.

The main notes of a tonal scale comprise 7 pitches, each consistently designated by its own letter. So a piece in C major would generally use the pitches C-D-E-F-G-A-B-C. A piece in C# major would use C#-D#-E#-F#-G#-A#-B#-C#. It would be incorrect to designate these as C#-D#-F-F#-G#-A#-C-C#, as there would be two "flavors" of F and of C, but no "flavor" of E or of B. The piece in your example appears to be the "Moonlight Sonata", which is in C# minor. The pitch below the C# is thus written as a B#.

This piece is in the key of either E major or C# minor. The melody line goes G# - B# - F#, spelling out a G#7, a dominant chord of the III (mediant) of the scale, a secondary dominant to the submediant (VIm or C#m in this case). This harmony would be normally a G# minor having B instead of B#, but due to its secondary dominant nature it will have its third sharpened.

András HummerAndrás Hummer
71444 silver badges1414 bronze badges
add a comment  |
1
I'm confused as to how I should play the second note below, B#. Does it mean it's a C? Is it possible? In which case, why is it written like this, and not just C?

Here are the first seven tones of the C# Natural Minor Scale:

Notice that the chord on the fifth (Dominant) scale degree is Minor (G# Minor).

In Music Theory, the seventh scale tone (B Natural) of the diatonic (natural) minor scale is raised a half-step in order to get a major chord on the Dominant (fifth) scale degree.

This gives us a (B#) as the seventh degree of the scale and the following changes to the harmonized C# Minor Scale:

To further confuse things, the notes may only be enharmonic (same pitch) in equal temperament. In some other temperament, they may be slightly different pitches.

3
Understanding the notes in the 4th measure of Moonlight Sonata
1
Chopin Etude How to play C-flat?
1
Key Sig Note Change
38
Why do notes have multiple names?
1
Is it fair to say the treble clef is optimized for piano?